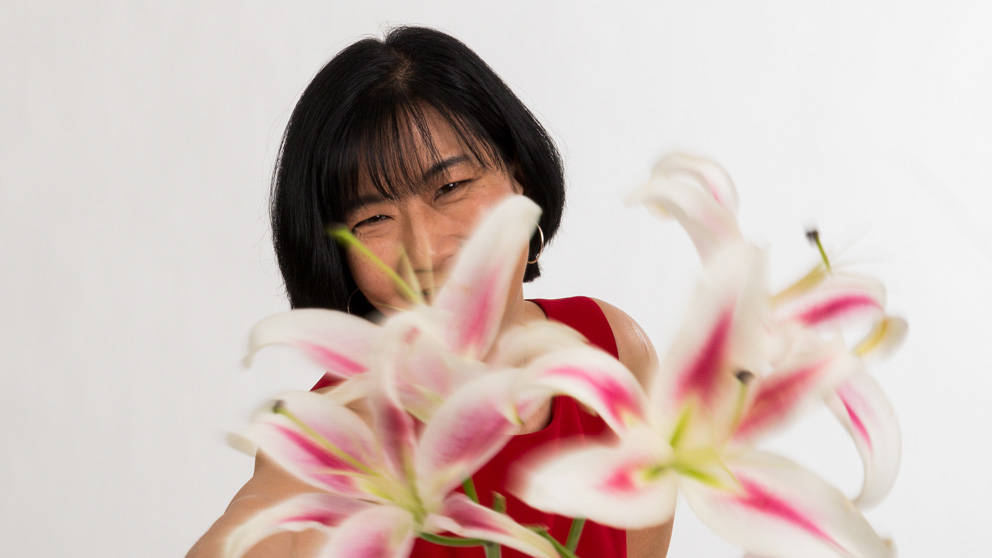 Since June 2012, when she became site director at The Jackson Laboratory for Genomic Medicine in Farmington, Conn., Yu-Hui Rogers, M.S., has relished the challenges of starting a major biomedical research institute from scratch.

Rogers and her administrative team are busy recruiting a roster of top-level researchers and scientific support staff to work at the new genomic medicine center, formally dedicated in October 2014 on the University of Connecticut Health Center campus. She also works closely with scientists to develop the Laboratory's computational biology capacity, putting in place the latest in genome sequencing and analysis equipment.

She is thoughtful and she asks all of the hard questions— qualities that will serve this institution very well.

"We are just crazy-busy," Rogers says. "But getting people here from across this country and all around the world, who all have different ways of thinking—that's what makes my job unpredictable sometimes, and that's what makes it fun."

One of her most important responsibilities is to guide the acquisition of genomic technology at the new research institute—the computational tools that allow researchers to analyze and make sense of the vast amount of data generated by genome sequencing. Douglas Hinerfeld, Ph.D., director of clinical genomics and translational technology at the Laboratory, says Rogers brings an essential mix of administrative skill and computational expertise to the task.

"Beyond being a very capable administrator, her knowledge of genomic technologies is second to none," he says. "Yu-Hui is in the position of having to make critical decisions around technology acquisitions based on very little detail about the future needs of JAX Genomic Medicine. She is thoughtful and she asks all of the hard questions— qualities that will serve this institution very well."

Rogers is not one to back down from a challenge. She has pursued a remarkable career path, one grounded in her early personal experiences and yet very much of her own making. Her success at JAX Genomic Medicine is just the latest in a long run of professional achievements that have their genesis in her childhood and in a compassionate philosophy that guides her experience of the world.

'The disease defines my life'

"My father developed cancer when I was just a little girl. The disease defines my life," Rogers says. "I was very close to my father, but he was ill for as long as I could remember—from the cancer itself as well as from the chemotherapy and radiation." The experience "forced me to confront and accept the nature of the human condition at a very young age."

Rogers says she comes from "a very conservative, very traditional" Taiwanese family in a culture in which a woman typically loses the financial support of her family of origin once she marries.

"Because my father was sick and could not work, we were very poor," she says. "So I understand what poverty is and what it does.

"My mother took care of my father, who was very debilitated from his cancer and treatments, but she had to make a living for the family, too," Rogers recounts. "She ran a little store that sold rice and also livestock feed. She worked from the time she woke up in the morning until she went to sleep at night."

After enduring years of progressive weakness and paralysis due to his brain tumor, Rogers' father died when she was 12 years old.

"When someone you love dies, it leaves a hole in your heart that never fills," she says.

'I came to this country by myself with a suitcase'

Rogers attended a public technical high school in Taiwan and studied chemistry, intent on obtaining a job after graduation. Before and after school, she worked in her family's struggling store. During the summers, she labored in a sweatshop production line and lived in a workers' dormitory.

"All I did was work and eat and sleep," she says. "So I knew pretty clearly what I didn't want to do as an adult. I have always liked the honesty, purity and clarity of science, and my mother asked me if I wanted to go on to college. She allowed me to pursue that dream, and she supported me."

She completed a four-year program at Chung-Shing University, first studying soil science and then transferring to chemistry. After graduating in 1988, Rogers worked as a research assistant at the university for two years. But she wanted more. Determined to break free of cultural constraints, she decided to advance her education in the United States. She contacted a friend living near Washington, D.C., and obtained a visa.

I came to this country by myself with a suitcase not speaking much English and not knowing exactly where this was going to take me.

"I came to this country by myself with a suitcase not speaking much English and not knowing exactly where this was going to take me," she says. For a year, she studied at the University of Maryland to improve her English and prepare for the rigorous academic course ahead. She was accepted into the M.S. program at American University in Washington, D.C., and was awarded a teaching assistantship. Her academic work there was outstanding.

"My advisor urged me to transfer into the Ph.D. program, but I said no. My mother was still supplementing my living expense and I knew when I finished my master's degree that it was time for me to go out and work," she says.

'You are the back-up plan'

Rogers' first job after graduation, from 1993 until 1998, was with the Baltimore-based genetics technology company Molecular Tool Inc., later acquired by Orchid Biosciences Inc. She conducted research and wrote papers and grant proposals.

"We were developing genotyping technology to detect single-nucleotide variants for diseases and for identifying paternity," she says. "That's when I started getting interested in understanding genetics and genomics."

Her next position was with Celera Genomics in Rockville, Md., headed by the innovative— and sometimes controversial—geneticist J. Craig Venter, who used whole-genome shotgun sequencing to be among the first to complete the sequencing of the human genome.

"I was hired to develop an alternative way to prepare the DNA for sequencing. As an organic chemist, I was still trying to learn molecular biology. I said 'I'll do my best, but you'd better have a back-up plan.' They said, 'You are the back-up plan.'"

"I signed up to do new technology development with a small team, but instead I became responsible for over 100 people and a budget of $25 million to $30 million," Rogers says.

It's an impressive record for someone who prefers to work behind the scenes and who still seems a little surprised by her own success.

The varied responsibilities of her position at JAX Genomic Medicine draw on her experience, suit her temperament and challenge her intellect, Rogers says. But the real reason she made the move to the Laboratory is even deeper than that.

"I felt I had another 10 years of really productive time in my career, and I wanted to be in a field that I care deeply about, where I can utilize my expertise to its fullest extent," she says. JAX Genomic Medicine's mission satisfies a deeply felt need to connect with others.

"John Donne, the 17th century poet, knew about that connection when he wrote that 'no man is an island, entire of itself,'" she says. "To study the genome is to understand ourselves and our loved ones. It is our genome that links us together, that makes us more similar than different."