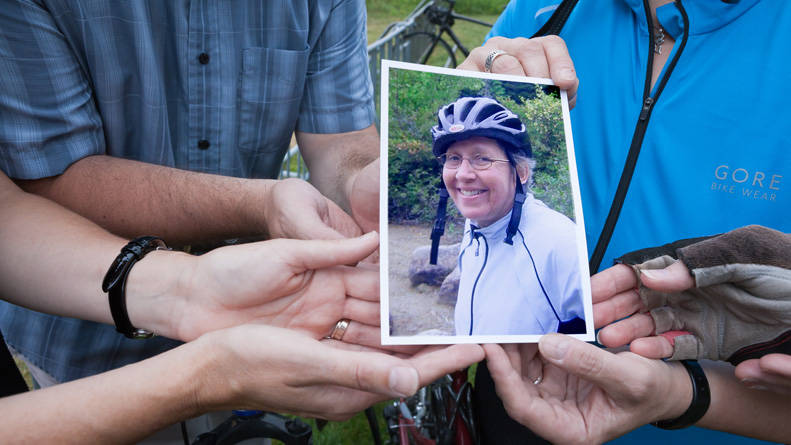 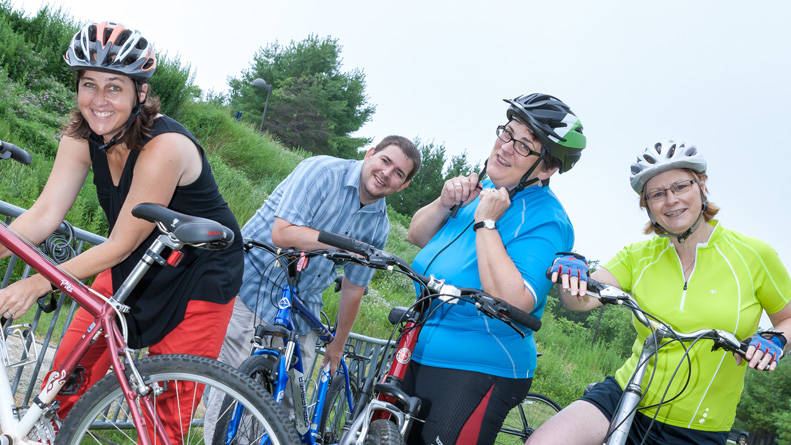 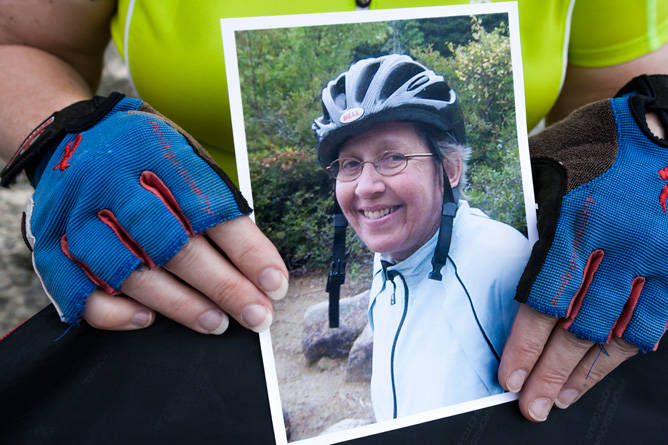 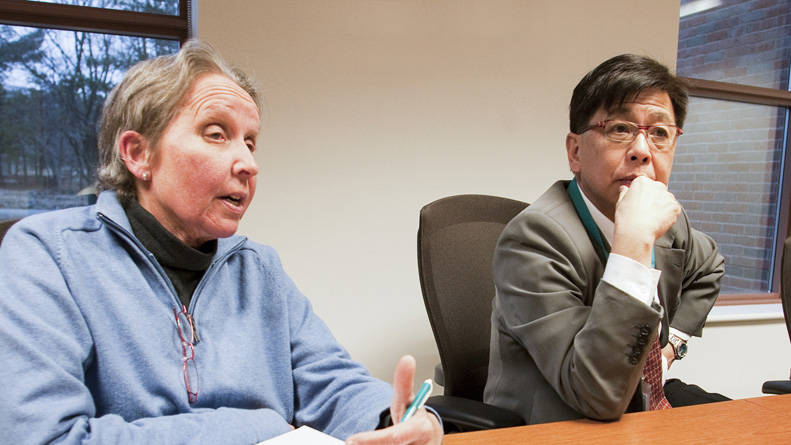 Cookie Willems meets with Ed Liu soon after his arrival at the Laboratory. Willems worked at JAX for more than 25 years. 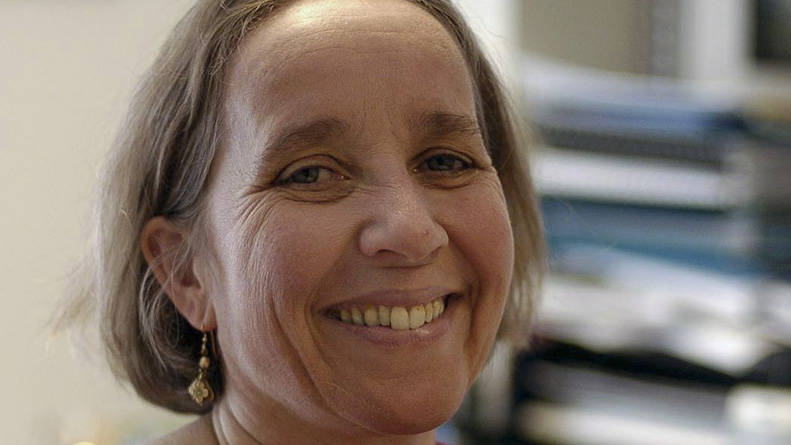 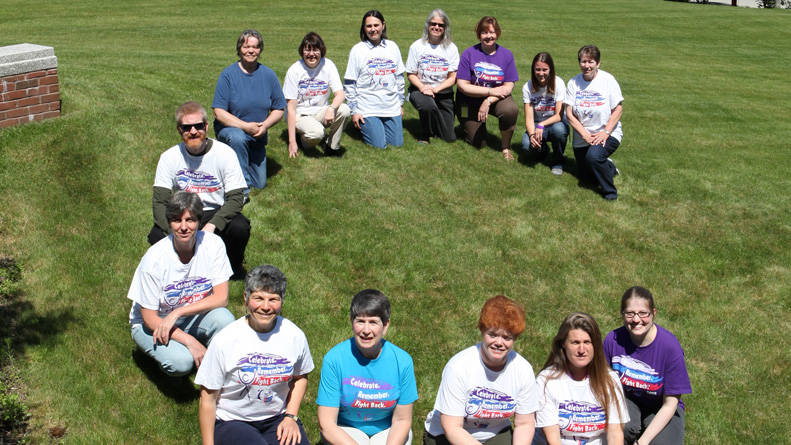 C is for Cookie! Colleagues organized a relay team for the 2012 Relay for Life in honor of Willems, and all monies were raised in her name.

Longtime Jackson Laboratory employee Geertruida "Cookie" Willems was renowned for building morale and camaraderie within the JAX community. All the same, she was no pushover.

"You could go into a knock-down, drag-out fight with Cookie and always come out laughing," says Executive Vice President and Chief Operating Officer Charles Hewett, Ph.D., who worked closely with her on budget projections and revenue streams. "The issues were important to her, but she respected differences, too."

Willems died in 2012 at the age of 56, more than 25 years after she started working at the Laboratory and four years after being diagnosed with terminal ovarian cancer. She left behind a legacy of dedication, professionalism and quiet good cheer that continues to inspire her many close friends and appreciative peers.

She had integrity that went beyond integrity. Everyone knew you’d get the straight story from Cookie, and it would be accurate.

"Cookie was not only a great colleague, she was an inspiration for those of us who believe in the mission of The Jackson Laboratory," says Edison Liu, M.D., JAX president and CEO. "Her personal sense of courage and her giving nature, which continued to the last moments of her life, were profoundly engaging and inspiring."

At the time of her death, Willems was the senior director of the Laboratory’s Office of Sponsored Programs (OSP), supervising an office that supports JAX scientists in managing their all-important research grants. Willems’ team helped researchers provide the necessary documentation, kept tabs on their complicated budgeting and reporting, and flagged potential problems before they became real ones.

Along the way, Willems made many good friends within the community of JAX researchers while earning the respect of the senior administration team.

"She had integrity that went beyond integrity," says Hewett. "Everyone knew you’d get the straight story from Cookie, and it would be accurate."

Already, more than 100 individuals, including Willems herself, have donated to the fund, but Liu’s goal is to establish an annual giving opportunity to grow the principal and increase the interest it earns.

"Cookie’s friends and colleagues will find this ride a fitting tribute, given her commitment to the JAX mission and her absolute passion for biking in Acadia National Park," says Scott. Instead of commissioning a plaque or a static piece of art, Willems wanted to motivate others to support the Laboratory and was cheered at the prospect of sharing her passion for cycling, Scott says.

More than an administrator

In part due to Willems’ careful shepherding of the finicky grant process, the Laboratory has enjoyed a far-above-average rate of awards and renewals from essential funding sources such as the National Institutes of Health as well as from smaller organizations and foundations.

Willems vigorously supported the Laboratory’s designation as a National Cancer Institute-designated Cancer Center and was part of the tight-knit team that led the reapplication process each time it came due. The important NCI designation has put the Laboratory’s cancer research program on the map, spurring scientific collaborations and attracting significant cancer research dollars.

"I don’t know how she managed to get so much done because there was always someone in her office asking for advice or working on a grant budget or figuring out how to respond to a request from NIH," Professor Carol Bult, Ph.D., says. "But what was really great about Cookie is that she cared as much about the science as the researchers do. She was more than a senior administrator; she was really a partner in the whole Jackson Laboratory endeavor."

Cookie always showed up ready to play her best game. She always tried her hardest, and it was always a pleasure to see her.

Willems, who oversaw an annual budget of about $60 million in research funding, had strong ideas about how her program should run, but her instinctive collegiality always carried the day. Even as her disease progressed, demanding a greater and greater measure of her time and energy, friends say her spirits and her professionalism never flagged.

"Cookie was completely real and down to earth, always willing to help," says JAX Assistant Professor Kyuson Yun, Ph.D. "She was an incredibly strong woman, and she was always strong in the face of her cancer diagnosis. I never heard her whine or complain about her disease. Instead, she consistently helped the people around her to deal with it."

Willems’ unflagging good nature and competitive spirit won her many friends outside of work, too.

"She was always upbeat, and she had this great laugh," says Research Scientist Verity Letts, who enjoyed a regular Saturday morning tennis date with Willems for nearly 20 years.

"Cookie always showed up ready to play her best game," she says. "She always tried her hardest, and it was always a pleasure to see her."

Many people, faced with Willems’ terminal prognosis, would "simply collapse," Letts observes. "But Cookie just wasn’t that kind of person. She stayed upbeat and strong. She was a fighter."

The spirit of the community

As the Laboratory moves into a challenging future, Liu is expanding and strengthening its programs through new clinical collaborations and scientific partnerships. The Jackson Laboratory for Genomic Medicine in Connecticut is the most evident example of his ambitions, but the push to keep JAX research at the leading edge of global scientific discovery can be felt throughout the organization.

"Federal funding from sources like NIH is becoming more difficult to obtain," he says. "We absolutely need another source to support the innovative science that characterizes this place."

A well-funded endowment will provide a stable source of new revenue, he says.

"And who better to be the honoree than Cookie Willems, who embodied the core values of our institution and reflected the spirit of this community – and whose disease is one we are on target to cure?" Liu asks. "Cookie spent her life and her career here, and we should have a philanthropic edifice that is as permanent and constant as she was, a lasting memorial and tribute to her. She was a truly exceptional person."

In a letter she wrote after Liu’s announcement of the endowment named in her honor, Willems expressed her appreciation – and her hope for the future of cancer research.

".... more strongly than ever, I am convinced that the work being done on late nights and weekends in a JAX lab or on a JAX laptop will provide breakthroughs in our understanding of fundamental mechanisms of biology, and that new understanding will lead to those as yet elusive treatments and cures," she wrote. "I am excited that Ed [Liu’s] pursuit of additional collaborative strength for the Lab through its expansion and growth can expedite application of our discoveries. I only wish I were still there alongside my dedicated colleagues to assist in realizing Ed’s vision for the Lab."