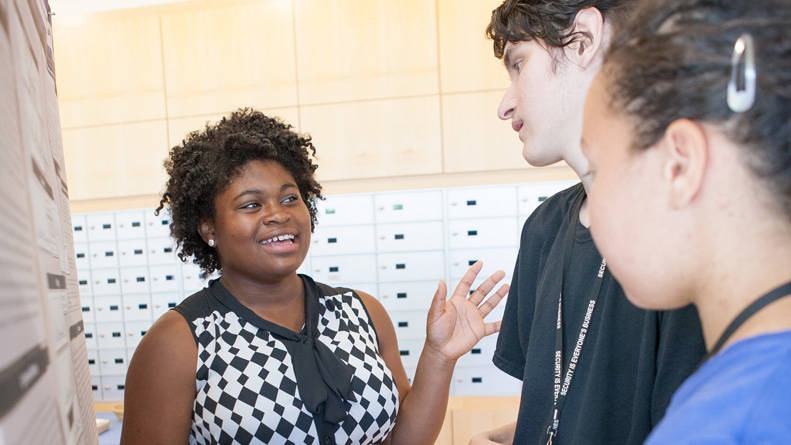 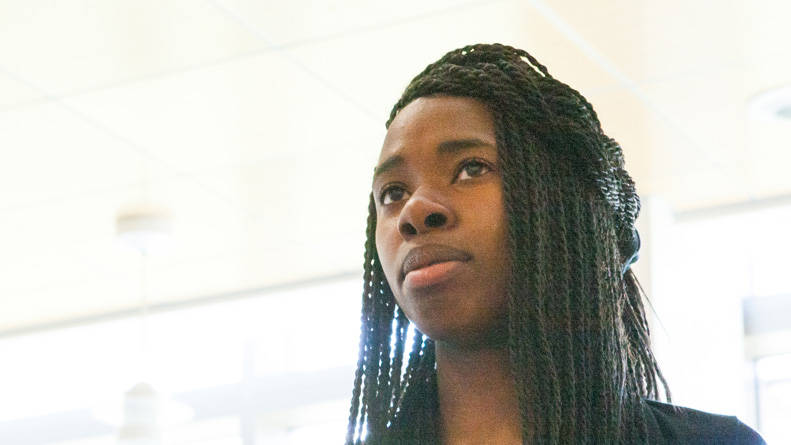 Jasmine Johnson attended the White House Science Fair in April to present her work into the relationship between sleep patterns and obesity. 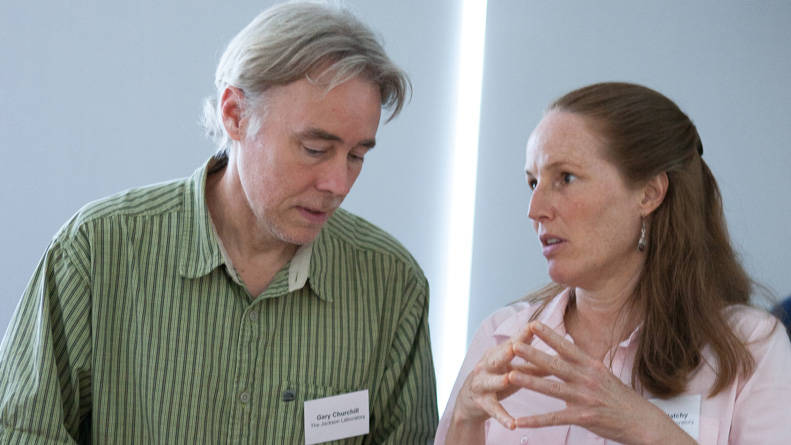 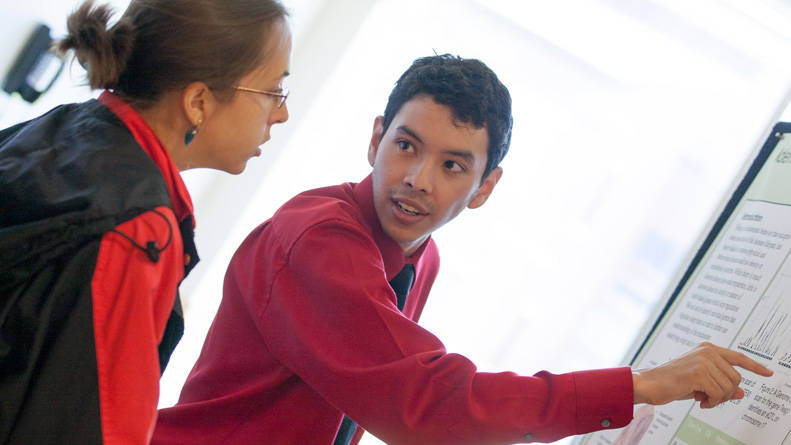 Summer Student Gabriel Vela explains his research. A high school student at the Rockdale Magnet School for Science and Technology near Atlanta, Vela recently concluded his second summer conducting research at the Laboratory. 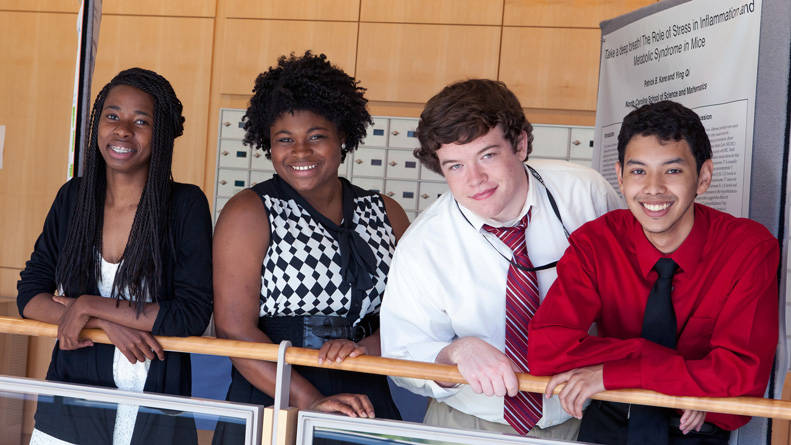 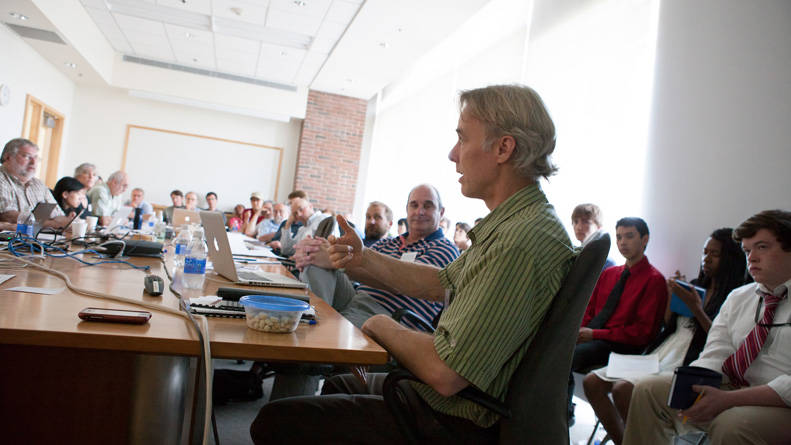 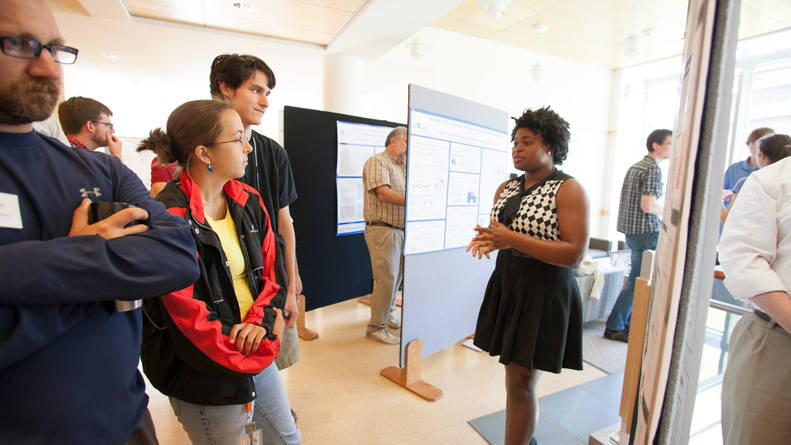 In the monastic calm of the Center for Genome Dynamics (CGD) at The Jackson Laboratory, summer afternoon light filters through the shaded windows. At each desk a computer screen glows on the intently focused face of a researcher, mouse clicks and keystrokes the only sounds in the large room.

High school senior Jasmine Johnson is in the nearby office of Jackson Professor Gary Churchill, Ph.D., the CGD’s director. She slides her laptop computer across Churchill’s desk, and he stares at the screen in silence for a moment. "Wow," he says.

Johnson and Gabriel "Gabe" Vela, who attend the Rockdale Magnet School for Science and Technology in Conyers, Ga., outside Atlanta, have been getting "wow" reactions for their work for two years, since joining the CGD’s innovative distance-learning program in the 2011 academic year.

After the President's speech, Dr. Collins stopped by again and gave me his card, and it hit me that I had been talking with the Director of the National Institutes of Health.

The Siemens Foundation announced that Johnson and Vela were among the 322 high school students nationwide selected as semifinalists for its annual math, science and technology competition. And Johnson was one of two recipients of the National Center for Women & Information Technology’s Aspirations in Computing Award to be invited to attend the White House Science Fair. She presented a poster on her research project exploring the relationship among genes associated with both sleep patterns and obesity.

"Before President Obama gave his speech about education," Johnson recounts, "there were lots of important-looking officials walking around looking at the students’ posters. A few seemed really interested in my project title and stopped by to talk to me."

One of these officials, who introduced himself as Francis Collins, asked Johnson detailed questions about her project. "I talked about having such an amazing time working at The Jackson Laboratory, and just by looking at the analysis, he figured out that Gary Churchill was my mentor. After the President’s speech, Dr. Collins stopped by again and gave me his card, and it hit me that I had been talking with the director of the National Institutes of Health. He told me to say hi to Gary."

She adds with a smile, "I have that business card stowed away for safekeeping."

Churchill, a statistical genomics expert with the quiet intensity of a guru, designed the program when first applying for CGD funding from the National Institute of General Medical Sciences. He and outreach coordinator Susan McClatchy work directly with select students at Rockdale, the Maine School of Science and Mathematics (MSSM) in Limestone, Maine, and the North Carolina School of Science and Mathematics (NCSSM) in Durham, N.C., providing the young people with an immersion experience as systems biology researchers.

"The Center for Genome Dynamics," Churchill explains, "is a program designed to bring multiple investigators together to encourage interaction across disciplines. The idea is to get biologists in the wet lab and computer scientists in the dry lab to have projects that are synergistic. By working together either does more than they can do alone.

"We’re particularly interested in understanding how genomes work and that’s why we call it the Center for Genome Dynamics. We look at dynamic processes of gene recombination, expression—all the processes that are fundamental to the biology of the genome. The wet-bench biologists will do lab experiments and measure things and generate data, and the computer scientists will analyze the data and send interesting findings back to the wet-bench researchers to explore further."

Vela and sophomore Chelse Steele, all students of Rockdale science teacher Amanda Baskett, also were participating in The Jackson Laboratory’s Summer Student Program, residing in the historic Highseas mansion with 30 of their peers and spending their days at the Laboratory working on their independent research projects in the Churchill lab.

NCSSM graduate Patrick "Bo" Kane was also a summer student, in the laboratory of Assistant Professor Greg Carter, Ph.D., and another NCSSM graduate and CGD alumnus, Justin Hendrick, worked as a co-op associate in the Carter lab, building graphics for a software package that shows relationships between genetic markers and physical characteristics, or phenotypes.

Hendrick recounts how NCSSM teacher Bob Gotwals recruited him for the CGD program. "I got an email from Mr. Gotwals and it just said, ‘Come see me,’ so I didn’t have any idea what it was about! But I was immediately excited about this because I got to do code and study biology, because I love both." Kane adds, "I’m not a huge fan of biology, but I do like modeling: using computers to tell us things about data that otherwise are difficult to perceive."

Gotwals, whose background is in quantum and computational chemistry, says, "Just getting into our school is highly competitive, and the students we pick for the CGD program are truly the best of the best. Our school motto is ‘Accept the greater challenge,’ and these students have the curiosity and the work ethic that are required to be a good researcher. You can’t tell that from a paper application—you have to work with students in the classroom to know who really belongs in this independent research setting."

MSSM biology teacher Deborah McGann was the first teacher to bring students into the CGD distance-learning program. "It’s been win-win-win all around," says McGann. "The computational biology course has opened so many doors for the students who have participated. To have somebody like Gary Churchill actually listen with interest to what they have to say really helps them believe they can contribute to the scientific community."

During the academic year, Churchill and McClatchy "meet" remotely with the students once a week in a 90-minute online session. "We realized early on," Churchill says, "that we wanted to use that time for interaction with the kids, rather than lectures."

So the CGD team, including the high school teachers, developed a series of online modules to train students in the basic skills they need for their independent research projects. One of their modules, Quantitative Trait Mapping, won the Science Prize for Inquiry-Based Instruction from the American Association for the Advancement of Science (AAAS), and the team published an essay in Science.

"Not many high school science teachers get to publish in Science," McGann notes.

McClatchy notes that because the CGD distance-learning program requires such intensive interaction with the students and their teachers, "it’s not really scalable. However, what is scalable is the Quantitative Trait Mapping module. We would like to see it placed in undergraduate biology courses, where the faculty will already have the requisite scientific background to incorporate the module in their courses."

Free access to the online module, McClatchy adds, "means that colleges and universities lacking wet lab facilities can provide their students with a real research experience. We have high hopes that it will scale up and scale up big. Really big."

Besides offering the Summer Student Program to talented high school and college students for more than eight decades, The Jackson Laboratory has coordinated and hosted the Maine State Science Fair for high school students since 2011, sending the first Maine students to the INTEL International Science and Engineering Fair.

"It's hard to overestimate the value of hands-on research experience for young people aspiring to a career in science," says Tom Litwin, Ph.D., vice president for education. "And as biomedical research becomes more data-driven, the CGD's distance learning program is providing students with the mathematical 'chops' they will need to succeed."

It's hard to overestimate the value of hands-on research experience for young people aspiring to a career in science.

On a recent morning Litwin is at the back of a crowded conference room, dimly lit for a PowerPoint presentation. He is here to listen to the students’ presentations to the CGD’s review board, including scientists from NIGMS, The Jackson Laboratory and other research institutions.

Steele steps up next to the screen and introduces herself, as confident and clear-voiced as a seasoned scientist. She gives a brief overview of her project, explaining, "My research began about a year and a half ago when my lab partner and I sat in on a research talk by Jasmine Johnson on the genetics of sleep back at our school. Larry and I became interested in the fact that her data showed that obesity increased with sleep deprivation over time, and we decided to focus our research in the pancreas and its interaction with the obesity phenotype."

Kane’s, Johnson’s, Vela’s and Hendrick’s presentations follow Steele’s in quick succession, and the room empties out to the corridor for a poster session, each student answering detailed questions from the CGD board members.

David Botstein, director of the Lewis-Sigler Institute for Integrative Genomics at Princeton University, declares, "Over the last 50 years, biologists have not been data-driven or quantitative. Every other science has become quantitative, so chemists and physicists and engineers can barely talk to biologists, and vice versa."

Waving a hand in the direction of Vela, who is animatedly talking with a Jackson Laboratory scientist, he says, "This education program is doing something that’s really very important, which is to be quantitative from the beginning. Training young people in quantitative methods is really getting at the heart of that problem."

Webinar: Generate Quality Data by Ensuring the Health and Genetic Quality of Your Mouse Colonies