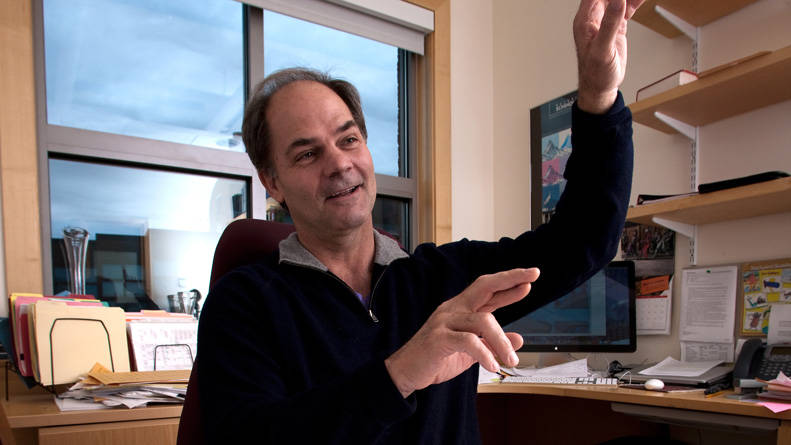 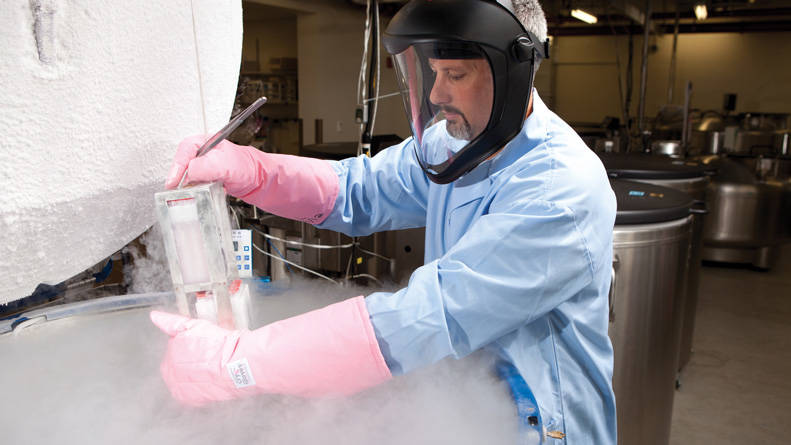 The Jackson Laboratory's research in reproductive and developmental biology has made profound contributions to human medicine, and the legacy continues.

In the 1960s and 1970s, Laboratory researchers developed the exacting techniques needed to grow, develop and store gametes, the reproductive cells that, when fully developed, are known as eggs and sperm. They did their work with mice, but the discoveries translated readily to humans. For example, it laid much of the groundwork for the world's first "test tube" baby in vitro fertilization (IVF) successes.

On the face of it, Bob Braun, Ph.D., the Laboratory's vice president for research, studies sperm development. His work, however, has implications for hormone signaling, RNA storage and regulation, and stem cell biology.

The RNA work arises from an interesting paradox, in that it takes longer to develop a rodent sperm (35 days) than it does to develop and give birth to an embryo (20 days). Along the way, the cells that become sperm undergo many changes, the most important of which is meiosis. But before the final developmental stages, their genes shut down.

We could extract sperm stem cells from boys about to undergo chemotherapy, then transplant the undamaged cells back at a later date.

We could extract sperm stem cells from boys about to undergo chemotherapy, then transplant the undamaged cells back at a later date."All the messenger RNA (mRNA) required to code for proteins during differentiation is made ahead of time," says Braun. "The mRNA has to be stored, then accessed when the proteins are needed. RNA regulation is really important. There are a lot of people interested in it, and RNA biology is a hot field now."

The stem cell research also has potential to be far-reaching. Stem cells take one of two paths—either remaining stem cells through self-renewal or differentiating into mature cells. Braun's work has demonstrated that sperm stem cells remain uncommitted for far longer than previously thought. Understanding the basic processes behind what determines staying stem cells versus committing to differentiation—and how these cells can revert back to self-renewal—will provide important insight into stem cell function.

"If we can maintain germ stem cells in vitro, that could have benefits for fertility treatments," says Braun. "We could extract sperm stem cells from boys about to undergo chemotherapy, then transplant the undamaged cells back at a later date."

Senior Research Scientist Mary Ann Handel, Ph.D., is hard at work on the project that brought her to The Jackson Laboratory full-time in 2002: generating and characterizing mouse models for male infertility.

"There were very few models available to study male infertility, because in the days of spontaneous mutants, if a male was infertile he was set aside," says Handel. "So we started a mutagenesis program, and it has been very successful. Researchers all over the world now use the mutant mouse strains in their research."

An important clinical goal—male contraception— has been elusive, but the search has provided important understanding into meiosis, the process through which sperm (and egg) precursor cells halve their chromosomes from 46 to 23. Each parent therefore contributes half the chromosomes in a fertilized egg.

"We have found several mutations that help with research into meiosis and the control of sperm cell division," Handel says. "What determines that it's time to start? What are the checkpoints if it goes wrong? Finding answers will help us move forward."

Professor John Eppig, Ph.D., focuses on the development of oocytes, which mature into egg cells. He has learned a lot about the complicated give-and-take signaling that occurs between oocytes and the cells of the ovarian follicle in which they develop, essential to the development of healthy eggs.

The discoveries have led to some breakthrough experiments. Eppig was the first to culture an oocyte from the later stages of development through to fertilization in the 1980s. Then he performed a feat that garnered widespread attention: he cultured all stages of egg development—from early precursor cell through fertilization—to produce a mouse (named "Eggbert") in the 1990s.

Eggbert was, notes The Scientist's 2005 profile of Eppig, a "huge achievement." It showed what oocytes need, as well as what they don't need, to develop into viable eggs. The understanding is crucial for improving medical options for infertile women, and it also provides the foundation for better methods of contraception.

Today, Eppig continues to investigate how oocytes develop within the body. In time he seeks to explain another tantalizing mystery—how are oocytes held in limbo, for decades in the case of humans, awaiting the final stages of development leading to mature eggs and ovulation?

Super-cooling embryos, eggs and now sperm to -196 degrees Celsius in liquid nitrogen effectively suspends them through time, with no ill effects when they are brought back out of the cryopreservation tanks. Tens of thousands of children and countless animals have been born of frozen embryos, and Laboratory researchers have long been leaders in making cryopreservation more practical and more effective.

The Laboratory's Larry Mobraaten, Ph.D., first established the Frozen Embryo Repository (now known as the Cryopreservation Resource) in 1979. All of the Laboratory's valuable mouse strains are cryopreserved now, both for efficiency and to ensure a secure archive. But at first the value of such a resource was not widely perceived.

"The first NIH grant I applied for was rejected, like all first grants are," remembers Mobraaten. "I called the project officer at NIH to get more information so I could try to revise it. He just laughed, and I asked him what was wrong. He said, 'Don't you know, we're trying to get rid of all those damn mice!'"

Eventually the idea caught on, however, and in 2012 the Laboratory celebrated the 25th year of its cryopreservation course, through which it teaches other researchers its latest techniques. Progress within the overall cryopreservation program continues under the leadership of Rob Taft, Ph.D., and Michael Wiles, Ph.D., with the latest breakthrough a practical way to cryopreserve, thaw and activate sperm. The process is useful for assisted reproduction, and the work also provides important information about what a sperm needs to be able to fertilize an egg.

An obsession with precision

The excellent work in the field being done at the Laboratory now is built upon a formidable reproductive and developmental biology legacy. But in the early days the work was anything but straightforward. Eppig

recalls that when he arrived at the Laboratory in the late 1970s, he entered a rather strange world. "The work being done at the Lab was fantastic, but what characters!" exclaims Eppig. "Wes Whitten, Leroy Stevens, Peter Hoppe—they were obsessive, almost paranoid about parts of their research."

Whitten made a crucial contribution from the finding that gametes and early embryos use a different metabolism from what had been assumed. He developed a culturing medium with a different fuel source for the cells that made such a big difference that it's now called "Whitten's Medium." Hoppe worked with early nuclear microsurgery and cloning experiments, in which he attempted to transfer the genetic material from a donor cell to a recipient egg cell. He too was fanatical about how his media and reagents were prepared.

Of the early researchers, however, Eppig thinks Stevens, now known as one of the originators of stem cell research within the research community, never received the wider credit he deserved in his time.

"He was small and quiet and always underplayed his contributions," says Eppig. "But he was an incredible guy, terrifically brave. In World War II he completed many dangerous surveillance assignments, the kind that had high mortality rates."

Stevens investigated teratomas, strange cancers whose cells grew into specific tissues. Tumors would have unexpected things in them—hair, teeth, muscle cells and more. The potential of the cancer cells to develop into mature tissues caught Stevens' attention, and he showed that these cancer cells were like embryonic cells, which also grow and divide into many different tissues.

The importance of his work wasn't widely appreciated until later, however. "Maybe his bravery carried over to his research program," says Eppig. "People thought he was kind of nuts to pursue it, but he laid the groundwork for modern stem cell research."

Eppig's work builds on that of that of Whitten, Hoppe and Stevens, and he happily credits them for their contributions. "I have my own focus on water for my media and I'm a stickler in how I use it. I learned that and more from my predecessors here, and working with them gave me a huge advantage in my own research."

Eva Eicher, Ph.D., was another formidable Laboratory researcher in the reproduction and early development field. While particularly interested in sex determination—the molecular events that determine the development of organisms as female or male—Eicher's contributions transcended a narrow focus.

"Eva was a real intellectual force," says Handel, who collaborated with Eicher on research to identify infertility mutations in mice as far back as 1978. "She was a superb geneticist who grasped how to pose a question and then answer it using definitive genetic models in her research. You look at the names of mouse strains here and there are so many with the letters "ei" in the nomenclature, which means she developed them."

When she retired from the faculty in 2007, Eicher was honored at the Laboratory with a two-day special symposium on mammalian genetics and sex determination attended by many leading researchers in the field.

"She really shed light on the big picture of how sex determination works in the mouse," says Handel.

The earliest stages of life provide today's researchers with a window on processes that have broader implications.

"The developmental biology field is changing and now carries with it a wider scope," says Braun. The "R&D" research program at the Laboratory has contributed a tremendous amount to the field in years past, including important clinical advances to fertility treatments and contraception. The future clearly holds even greater potential.