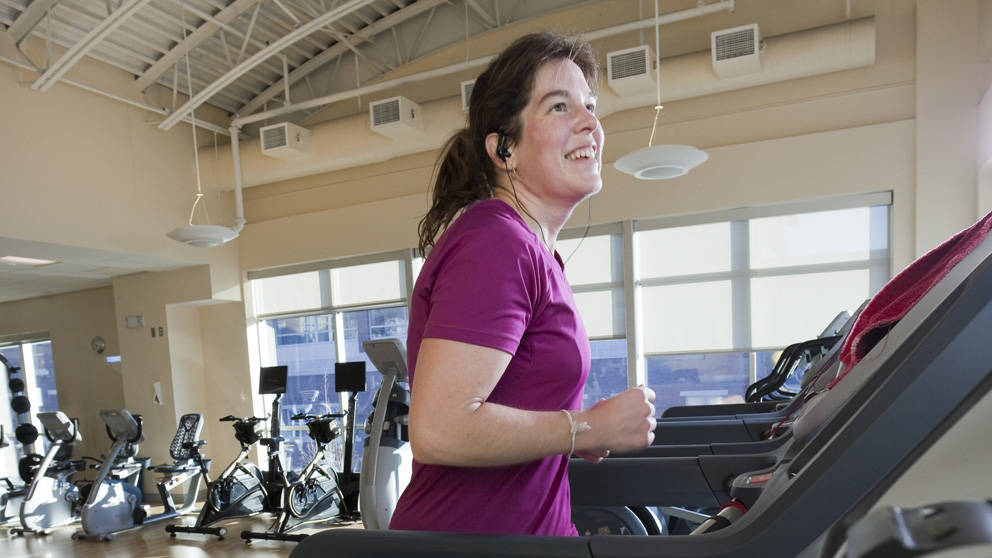 Christa Brey had a lot on her plate when she joined The Jackson Laboratory in May 2008.

There were, of course, the usual challenges of starting a new job. Beyond that, however, she was taking a hard look at her life in general. Her mom was overweight and struggling with health problems at a relatively young age. Brey was also "big" and saw herself following in her mother's footsteps. But what she found when she arrived at the Laboratory changed her life and set her on her own journey to becoming a marathon runner.

"If you're unhappy with your health, it's a big problem," says Brey. "When I came here I saw that there were a lot of resources available to help me change my habits. I was able to use the fitness center here often, started paying more attention to my diet, set small goals for myself, and just kept on going."

Brey took advantage of a new Laboratory program called JAXfit. Launched in 2006, JAXfit provides employees with the ability to take control of their own health and wellness. In addition to the new fitness center, there are classes, lunch and learns, and other programming to boost employee wellness awareness and participation.

JAXfit provides employees like Brey with the opportunity to take control of their health. It has also helped the Laboratory boost productivity.

I was able to use the fitness center here often, started paying more attention to my diet, set small goals for myself, and just kept on going.

Study after study indicates that wellness programs provide employers with a positive return on investment. Employees who take time for wellness activities—exercise, nutrition education, smoking cessation or something else—are more productive overall. So providing employees with an ability to spend 30 to 60 minutes on their own wellness usually translates into positive returns for the employer as well as the employees.

JAXfit has also helped rein in insurance expenses. Like all institutions, the Laboratory faces skyrocketing medical benefit costs. For self-insured institutions, the problem can be magnified by poor employee wellness. On the other hand, it also offers an opportunity given that improving the wellness of employees has a direct impact on benefit costs.

"The goals of JAXfit are to help employees become healthy, wealthy and wise," says Ben Billings, the program coordinator. "As the program launched we received data that healthcare costs for Laboratory employees were very high, even for Maine, where overall costs are higher than the national average. So, in addition to providing wellness opportunities, we wanted to provide education and resources to help everyone become more thoughtful healthcare consumers. JAXfit and thoughtful benefit design have contributed to healthcare savings that have resulted in no increase in insurance costs for either the Laboratory or employees for the last few years."

Of course it can take a lot to grab people's attention. In 2010 the Laboratory added a deductible to its insurance coverage. At the same time, JAXfit provided a "Passport" incentive that allowed employees to reduce or eliminate the deductible by completing wellness activities and education.

"We've come a long way," says Billings. "We try to design the program in a way that makes you ask 'Why wouldn't you want to do it?' but it can be hard to change the culture to one that focuses on wellness and preventative care.

The deductible was a wake-up call. For many employees it was a nudge, but some others saw it as a kind of slap in the face. But we all have to take responsibility for our health, and we've heard many great stories about how people have found something that's really helped them and how they are able to keep it going."

JAXfit's programs began receiving external notice and acclaim only a couple of years after the program launch. In 2009 JAXfit received a Well Workplace Gold Award from the Wellness Council of America and was awarded a Maine Fitness Award in the category of "Healthy Workplace Large Business Category" from the Maine Governor's Council on Physical Activity.

In 2011 it was awarded the Irv Marsters Wellness Champion Award from the Wellness Council of Maine, which recognizes "leaders who have used their skills, knowledge and resources to benefit people and serve as examples for others to follow in advancing wellness in Maine."

While awards are nice, the employee physical and financial health metrics have been more impressive. Health care risks since 2007 are down sharply across the board—blood pressure by 35 percent, weight by 13 percent, tobacco use by 33 percent and so on. The number of employees classified as low risk for health issues overall has risen by 50 percent, while those in the high risk and very high risk categories have fallen by a combined 83 percent. It's no surprise then that, contrary to national trends, per person medical expenses at the Laboratory fell 10 percent between 2008 and 2011.

JAXfit programming continues to be refined, and activity programs remain the most visible part. An early walking program, in which teams vied to accumulate the most steps tallied on pedometers supplied by the program, saw enthusiastic participation. More recently, exercise classes— Zumba, yoga, core fitness—are regularly taking over space in the fitness center or Roscoe's dining hall. And an inter-institutional competition between the Laboratory and the University of Maine, named "Big Bears to Little Bears" in homage to the university's black bear mascot, brought personal trainers to the Laboratory and raised the activity levels even higher.

For 12 weeks in late 2011, it was common to see groups of employees running up stairs or jumping around—a form of exercise called plyometrics actually involves a lot of jumping around—in the fitness center. It was a Laboratory team, Team Flabu-less, that bested all others from either institution to take top honors. But the individual stories were in many ways more significant, as employees, many of whom had never before consistently exercised, gained fitness and lost weight under the watchful eyes of skilled trainers. The program generated such a positive buzz that it was renewed for early 2012. Signups began more than a month before the program began again, and every team slot was filled inside of a week.

While more and more of Christa Brey's peers are becoming active in the fitness center, her own path has taken her far beyond the Laboratory. In late 2010, in fact, she signed up to run the Maine Marathon in Portland in October 2011.

Brey trained throughout the year, often exceeding her planned training mileage and always working toward her goal of running 26.2 miles. And so, on a rainy, windy day that challenged even experienced marathoners, Brey not only finished her first marathon; she finished strong and in "great spirits."

"The marathon was awesome," says Brey. "I didn't walk, and I wanted to do another one right away."

Although now an experienced and committed runner, Brey remains connected with those who are just starting their own physical transformations.

"I'm doing my own thing with my training at this point, but when I began losing weight I had a lot of people ask me how I was doing it and ever since I've been able to point them to the fitness center and all the resources the Laboratory provides. It's a great feeling when you take care of your own wellness, and it's been wonderful to share it."