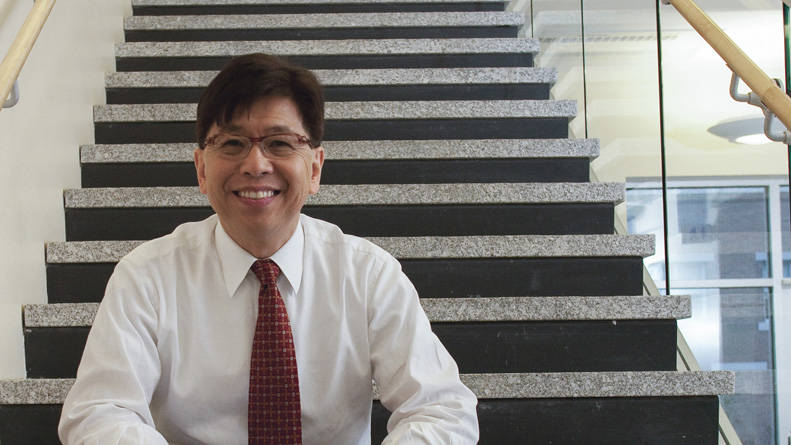 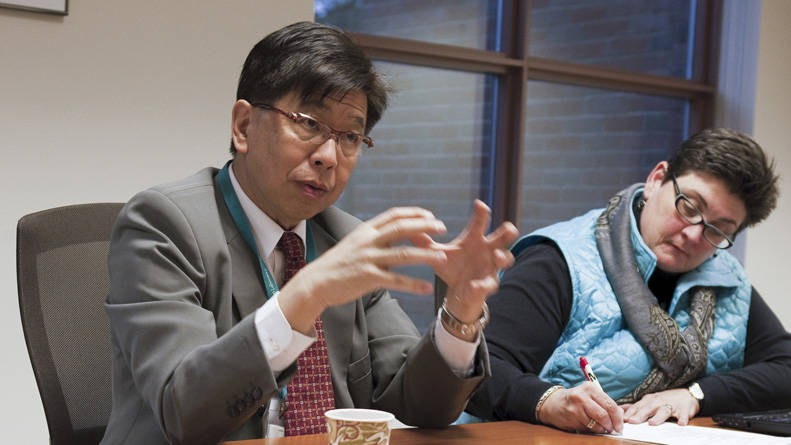 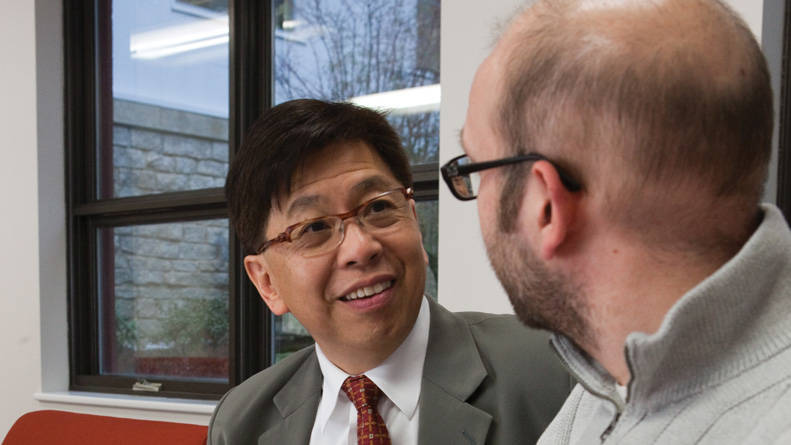 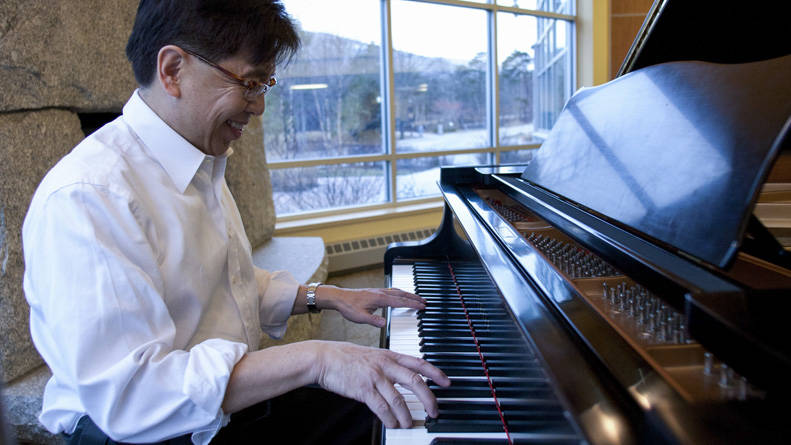 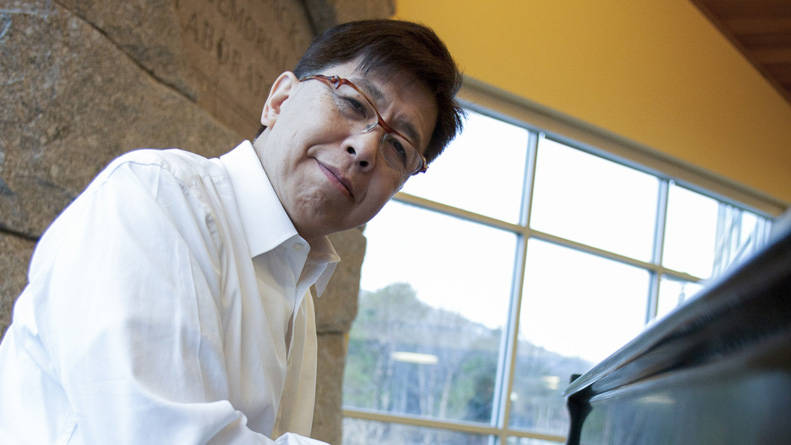 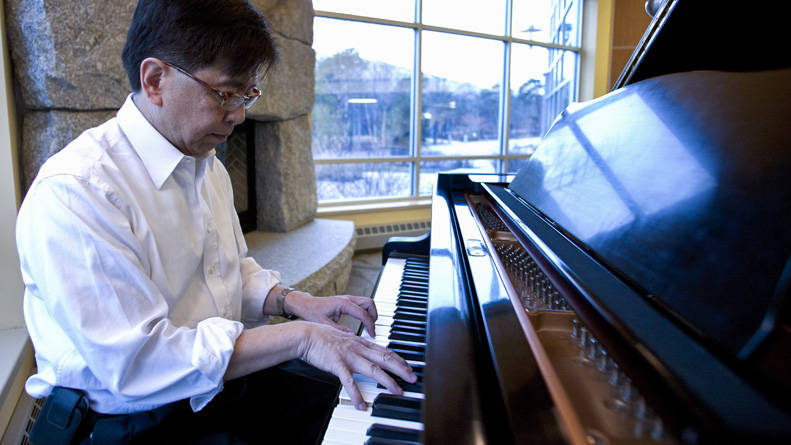 Edison Liu's extraordinary reputation preceded his arrival in January 2012 as the new president and CEO of The Jackson Laboratory. And it set the Bar Harbor campus abuzz.

"Ed was the smartest guy in the room, by a logarithm," said a researcher who met with Liu before his arrival.

"He has this incredibly fertile mind gushing incredibly creative ideas at a high rate," said a board member.

"Being with him is like drinking from a fire hose," said a senior executive.

Everywhere he goes on campus, people are inspired.

Everywhere he goes on campus, people are inspired. These first impressions of Liu as a prolific idea man are confirmed daily. Meetings with him often morph into brainstorming sessions in which he floats ideas and prods others for theirs.

When Dr. Richard Woychik, the Laboratory's president and CEO for eight years, departed in January 2011 for a position in North Carolina, Brian Wruble, then board chairman, knew that finding the right successor would be crucial.

"This is the single most important function a chairman or a board can carry out," says Wruble. "We took it extremely seriously."

Wruble led a search committee through several months of "very intense activity" to identify about 90 candidates from around the world and then winnow the list to a final few. Liu, an award-winning physician, researcher and administrator with international experience, was the first to be interviewed, via teleconference from Singapore.

"He came through as a man with very, very powerful ideas with tremendous force of personality," Wruble says. "He just blew everybody away" when he first visited the Laboratory after that interview."

Liu was offered the job and accepted it in August 2011.

The Laboratory's scientific faculty and staff have quickly embraced Liu, says Professor Robert Braun, Ph.D., vice president for research. "There is excitement and optimism in the hallways," Braun says. "One can't help but get swept up by his enthusiasm for the beauty of science. Despite being on board for only two months, and having never worked on the mouse, Ed seems to already get the unique culture of JAX, the sense of community that we all share and the power of mouse genetics to investigate the biology of health and disease. These are fun times at the Laboratory."

The Jackson Laboratory has for the last eight decades been devoted to basic research in mouse genetics. Liu's vision is to strengthen that legacy while starting an entirely new one, a transformative expansion into human genetics and medicine. And he will do so at a most opportune time: the blossoming of the genomic era.

"We are truly at an inflection point in human history where we will be able to engineer many solutions to most of the health problems that we face," Liu says. "We will marry the power of new genomic technology—which I hope to bring to JAX—with our historical strength in mouse genetics to find new ways to treat and manage human disease."

Due to rapid advances in gene-sequencing technology, it's now feasible for scientists to read the whole genome—the complete genetic makeup of an organism. The great challenge is to analyze this voluminous genomic data to discern how multiple genes, in all their variations, affect health, disease and drug response.

"If we are successful," Liu says, "we can imagine a future where your doctor will scan your genome—and, for example, that of your cancer—and tailor a treatment that is personalized and unique for you, in combinations that work better than anything we have now."

Liu is leading the development of a new research institute in Farmington, Conn., that will move the Laboratory into genomic medicine. The Jackson Laboratory for Genomic Medicine brings human-genetics researchers and computational biologists together to study the genomic complexity of disease, in partnership with scientists and physicians at Connecticut medical centers and researchers at the Laboratory's campuses in Maine and California.

"I want us to be the center of the world for complex genetics using the mouse as the model system," Liu says. "When we couple the new genomic technologies with the knowledge of the investigators and with the immense mouse resources, I think we can make a huge difference in the next wave of discovery for human disease."

'A man of extraordinary energy'

Liu, whose boyish looks betray his 63 years, powers through long workdays with vigor cloaked in a calm, confident demeanor.

"I really like what I do, so it's easy to be energetic," Liu explains.

Says Brian Wruble: "Ed is such a man of extraordinary energy. He's dynamite."

During recruitment negotiations, Wruble talked with Liu by phone during business hours on the East Coast. In Singapore it was the middle of the night.

"I don't know how he does it," Wruble says. "I think there almost must be more than one of him. He's got doppelgängers out there."

"The guy never sleeps" is a refrain heard often at the Laboratory, and it's not far from the truth. Liu typically goes to bed around 1 a.m. and rises at 6:30 a.m. Sleep was even more elusive as Liu transitioned from his Singapore job to his new one in the U.S., making several grueling 18-hour flights across 13 time zones.

"I can nap almost anywhere," he says, a trick he learned in his medical internship and residency.

Liu was 5 when his parents brought him and his younger brother to the United States in 1952 on a boat from Hong Kong in search of economic opportunity and a better life. The family found both in San Francisco's Chinatown, where Liu's parents established a family-medicine practice.

"I was exposed to medicine and the life of a doctor very early in my life," Liu recalls. "My family were all medical doctors—my mother, my father, my uncles, cousins."

Following the family tradition, Liu prepared for a career in medicine. He majored in chemistry and psychology at Stanford University, where his freshman roommate, Lee Salisbury, came to know him as "very focused and somewhat driven."

Recalls Salisbury, now a family law attorney in Pasadena, Calif: "Ed, unlike nearly everyone else I knew as a young person, had a vision of what he wanted to do with his life, which was not idle talk, and he followed through to be where he is now. At the same time, he had the warmest relationships with more people than pretty much anyone I've ever known. I've met a lot of memorable and interesting people, but Ed is at the top of the list."

After medical school at Stanford, Liu served his internship and residency at Washington University's Barnes Hospital in St. Louis. There, in 1980, he met a young nurse, Margaret Bedient. Today Ed and Maggie are in their 28th year of marriage and are the parents of three children.

"Pushing chemo was my life's goal" at the time, Liu says.

After his clinical training, Liu's scientific curiosity got the better of him, and he branched out into research.

"As I transited through medical training it became obvious to me that there were bigger questions out there with completely unknown answers that could make a difference in treating patients," Liu says. "So going into the laboratory I was able to explore avenues and niches that, as a clinician, were not available to me."

He studied yeast genetics as a postdoctoral fellow at UCSF in the laboratory of J. Michael Bishop, who later shared the 1989 Nobel Prize in Physiology or Medicine with Harold Varmus for their research into the origins of retroviral oncogenes.

Liu's dual career as a physician and scientist flourished. He treated cancer patients; researched breast cancer; taught and mentored students; and directed other cancer research in progressively larger jobs, first at the University of North Carolina at Chapel Hill and then at the National Cancer Institute (NCI), where he was in charge of 1,200 employees, including 100 principal investigators.

He left NCI in 2001 to become the founding executive director of the Genome Institute of Singapore. In 10 years he built the GIS into a world-renowned research institute with 27 laboratory groups and 270 employees.

Liu's curriculum vitae is a muscular 44 pages. It details his 30 professional appointments, his co-authorship of more than 300 scientific articles, and his many honors including the Brinker International Award for basic science research in Breast Cancer; the Rosenthal Award from the American Association for Cancer Research; and the President's Public Service Medal for helping Singapore resolve the SARS crisis.

He is serving his second elected term as president of the 1,200-member Human Genome Organization, which fosters collaboration between genome scientists around the world.

So how does a man "who never sleeps" relax?

"First of all my work is play," Liu says. "But beyond that...where I find the most relief, besides being with my family and friends, is really in music and in literature."

Liu started taking classical piano lessons at 7 and later migrated to jazz, enjoying the freedom to improvise. Playing and composing are among his passions to this day.

On a winter morning in Roscoe's, the Laboratory's cafeteria, he sits down at a Yamaha baby grand piano and launches effortlessly into When Sunny Gets Blue, Over the Rainbow and Friends, an original composition he played at his farewell party in Singapore.

"He was a prodigious jazz pianist even at the age of 17," remembers Lee Salisbury. "I am sure had he chosen to pursue that as a career rather than science, he would have gone just as far or further in that field."

Liu is an avid reader who has belonged to various reading groups. He is drawn to biographies, history and political philosophy.

His recent reads include Francis Fukuyama's The Origins of Political Order; Alexis de Tocqueville's Democracy in America; Robert Kaplan's Monsoon: The Indian Ocean and the Future of American Power; China by Henry Kissinger; Bismarck by Jonathan Steinberg; and The Rational Optimist by Matt Ridley.

Just the kind of books an idea man would be expected to read.