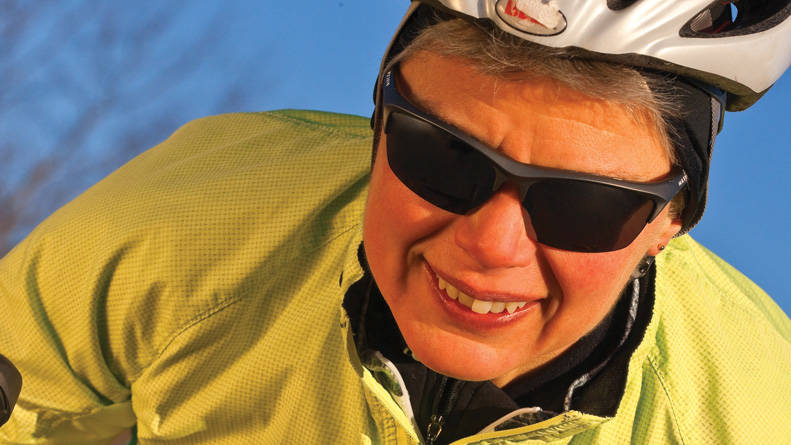 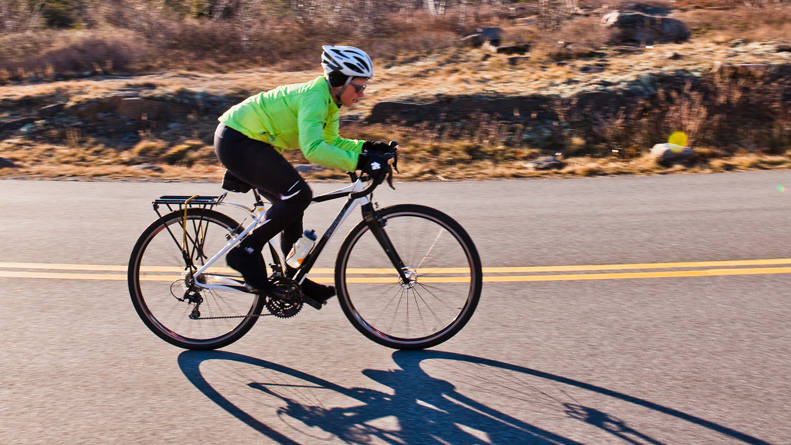 In the photo, the bicycle racer in full Tour de France-style gear is on a hill so steep the wheels are aligned with diagonal corners of the frame.

The racer is Jackson Laboratory Professor Carol J. Bult, Ph.D., the photo is proudly displayed on her office shelf, and the hill is the punishing 22-degree incline near the finish line of the Mt. Washington Auto Road Bicycle Hill climb in New Hampshire's White Mountains.

"I'll never be the fastest person to race up Mt. Washington," Bult says with her characteristic cheerful smile, "so my goal is to be the oldest person."

She says she feels the same about her work: "I want to be able to do what I'm doing for as long as I possibly can, because it's very fulfilling."

Bult is a computational biologist with research programs in lung cancer, birth defects, pain management and bioinformatics. It's a wonder she has time to do any racing at all, let alone volunteer for the local search and rescue team, perform with her trumpet in the Bar Harbor community band, take bird-watching hikes or go mountain-bike riding with friends on the carriage roads of Acadia National Park.

Bult's career started in the Washington, D.C., area, at the Smithsonian Institution and The Institute for Genomic Research (now known as the J. Craig Venter Institute).

"I was really fortunate in the opportunities I had in Washington," Bult recalls. "I got to work on some really groundbreaking, landmark genomics projects. But I was spending two and a half hours a day commuting, and working very long hours, and there wasn't time for anything else."

When she moved to Bar Harbor, Maine, in 1997 to join The Jackson Laboratory's faculty, Bult decided to put work and life in better balance.

"I realized that I can make more contributions to science here, thanks to the Laboratory's people and infrastructure, while also contributing to my local community, in one of the most beautiful parts of the world."

From her first years at The Jackson Laboratory, Bult has been part of the Mouse Genome Informatics consortium, building the genetic and genomic databases that the world's scientific community depends on. The first sequencing of the mouse genome a decade ago yielded a kind of genetic parts list, and Bult's group has been annotating that list with information about how those parts work, drawing from research published at the Laboratory and institutes around the world.

Bult also collaborates with Jackson computational biologists and statisticians to mine the databases in search of patterns that could reveal clues to biological pathways and networks.

I want to be able to do what I'm doing for as long as I possibly can, because it's very fulfilling.

"By finding relationships between genes that are consistent across many different data sets," Bult explains, "we might surmise that gene A and gene B are functionally related in some way. We can then use the mouse to experimentally validate these predictions."

Armed with vast quantities of functional data and new data-mining techniques, Bult is now exploring the genetic basis of lung diseases such as cancer and pulmonary fibrosis. Her team uses genomic profiles of the intricate process of normal lung development to identify the genes and pathways that are likely to be critical to disease initiation and progression.

"We start with electronic catalogs of known and predicted gene functions and networks. Then we zero in on a specific tissue at a specific developmental time to find candidate genes that might be relevant to the disease of interest," she explains.

"This is really a systems approach to understanding cancer and other diseases," Bult says, "and it's becoming the signature approach of The Jackson Laboratory."

In February, one of the world's top journals, The Proceedings of the National Academy of Sciences, published a paper Bult co-authored with Patricia K. Donahoe, M.D., director of the Pediatric Surgical Research Laboratories at Massachusetts General Hospital. The researchers reported on their discovery of 27 new candidate genes for congenital diaphragmatic hernia (CDH), a common and often deadly birth defect.

Babies born with CDH—representing one in every 3,000 live births—have a hole in the diaphragm that separates the abdominal cavity from the chest cavity. Their lungs don't develop properly, and even after surgery the babies may suffer fatal respiratory complications. With her Jackson colleague Julie Wells, Ph.D., Bult generated gene-expression profiles—snapshots of gene activity—for embryonic mouse diaphragms at multiple stages of development.

Filtering the resulting data through newly designed algorithms, they then predicted genes likely to contribute to diaphragm defects.

"We asked which genes in our developmental data sets work together in common pathways, and which of these pathways contain previously known CDH genes from human studies and mouse models."

Collaborator Donahoe says, "The integration that Carol devised for this study can be used to study many other congenital anomalies. We cherish her expertise, creativity and scientific generosity, without which our collaborative research could not have been done. Her work has set the stage for many more projects in the future to uncover the genetic causes of congenital diaphragmatic hernia and other birth defects."

The Bult lab is also taking a fresh approach to pain response. There's a wide range of pain sensitivity in both human and mouse populations, and Bult is seeking novel genes associated with pain susceptibility, working with Jill Recla, who recently earned her Ph.D. on this study. The standard experimental approach to finding these genes would be to cross a mouse that is highly resistant to pain with a pain-susceptible one, cross their offspring and examine the second generation.

"You can find genes using that approach," Bult notes. "But the two kinds of mice you started with represent very little genetic diversity, so your results may not be generalizable to a whole population, and they tend not to translate well from the mouse into the human."

"We've used this Diversity Outbred population as a basis to search for genes that condition individual susceptibility to pain response," Bult says.

The researchers have identified several candidate genes that have never before been implicated in pain. "This is opening up our understanding of what pain and pain response is in completely novel ways," she adds.

Bult's palpable passion for her work in understanding how living things work goes back to early childhood.

"I was a science-y kid very early on," she recounts. "I was always a naturalist. What I liked to do was go out in the woods with my dog, and I'd watch birds and catch things and set them free or bring them home to study."

She says her parents encouraged her interests, though her mother was afraid to come into her room to see what might be living under her bed, and there was a memorable incident involving snakes chilling in her grandmother's refrigerator to make it easier to photograph them. Bult earned a B.S. in biology from George Mason University and her Ph.D. in genetics from the University of New Hampshire.

"I wanted to be a scientist since I was old enough to know you had to have a job, but I didn't think I'd be the kind of scientist I am today," Bult muses. "I thought I would be a naturalist. Instead I'm working on understanding the genome, which drives life. That's a pretty great path to be on."