A life of contribution 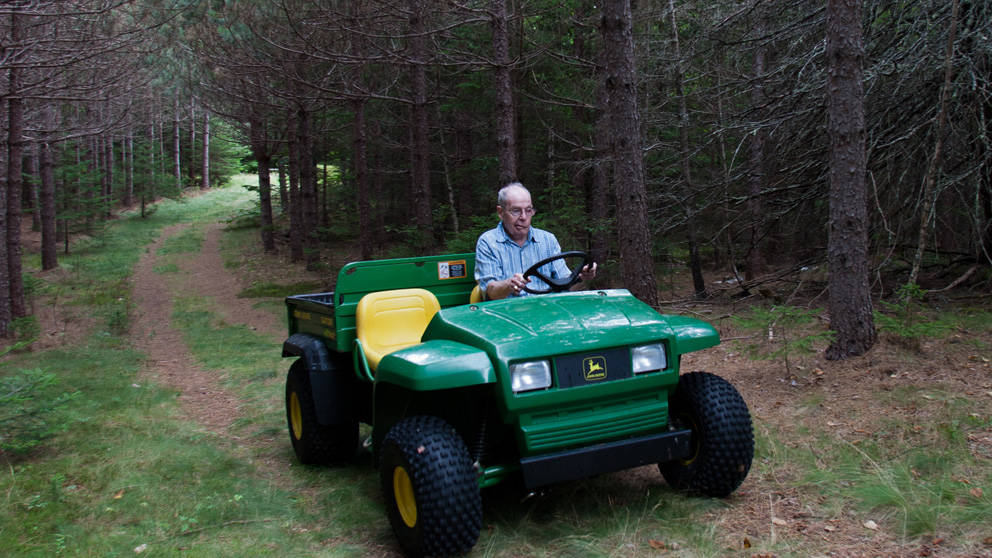 Jackson Laboratory Professor Emeritus Douglas Coleman, Ph.D., is wrapping up his Friday morning workout on a stationary bicycle in the Laboratory's employee fitness center. It is fitting that he is a familiar face at the facility because it was named in his honor.

Glancing out the window at the brilliant summer sunshine and green mountains surrounding the Laboratory, Coleman tells Janet Anker, another morning work-out regular on the bike next to him, that he's on his way to his weekly volunteer duties at the Wild Gardens of Acadia. "The 'Wild Ladies' will be waiting for me," he says with a smile, a fond reference to the Gardens' organizers, his longtime friends. Coleman volunteers in honor of his late wife, Beverly, who had worked on the gardens for more than 25 years.

Now 81, the retired scientist is more active than most people half his age. When not working with the "Wild Ladies," he spends most mornings outdoors on the scenic waterfront land of his home in Lamoine, Maine, a few miles north of the Laboratory along Frenchman Bay. He travels the world, already making plans for a passenger-boat trip to the fjords of Norway after a recent trip to Holland.

"I plunged into retirement with the same enthusiasm that I had for research," Coleman wrote recently in an autobiographical profile. "My love of the outdoors and concern for the environment led me to become actively interested in forest management, land protection, conservation and other ecological issues. I've spent long hours each day rehabilitating our woodlot, making recreational trails that the public, especially students, are encouraged to use for both recreational and educational purposes. In all things science as well as environment, I've tried to leave things better than I found them."

Canadian-born Coleman was the only son of parents who had little formal education. "I was encouraged to excel in school," he recalls. He became interested in biochemistry while an undergraduate at McMaster University and earned his Ph.D. from the University of Wisconsin in 1958. Faced with several career options, Coleman decided to join The Jackson Laboratory's scientific staff as a research scientist working with, among others, George Snell, who would go on to win the 1980 Nobel Prize.

"This decision was transformative," he says. "The Jackson Laboratory had fascinating genetic disease models, interactive colleagues and Acadia National Park as a backyard."

Since his retirement in 1997, Coleman has accumulated some of the highest honors of the scientific world, primarily for his pioneering contributions to understanding the genetic components of obesity.

In the 1970s, Coleman conducted a landmark series of experiments that led him to propose the existence of a "satiety factor" that would account for obesity and type 2 diabetes among certain mice in The Jackson Laboratory's colonies. Later, armed with new tools such as gene mapping, Rockefeller University Professor and Howard Hughes Medical Institute Investigator Jeffrey Friedman would identify that factor as leptin, a hormone that regulates appetite and body weight.

The scientists' work showed that chemical and genetic factors—not just willpower and eating habits—are involved in obesity. Their discoveries provided a window into the genetic complexities of obesity and offered the first possibilities for pharmaceutical treatments for the rare cases of human obesity that are specifically due to defects in leptin processing.

"I do not care for honors or awards; they embarrass me. "Coleman and Friedman shared the 2009 Shaw Prize in Life Science and Medicine, widely regarded as the "Nobel of the East," as well as the 2010 Albert Lasker Basic Medical Research Award, the top American prize in biomedical research.

Coleman himself won the 1977 Claude Bernard Medal of the European Diabetes Federation, the McMaster University Distinguished Alumni Award in 1999, and the 2005 Gairdner Foundation International Award. He was elected to the National Academy of Sciences in 1998.

I do not care for honors or awards; they embarrass me.

Well known among his Jackson Laboratory colleagues and friends for his modesty and plainspoken honesty, Coleman shuns the limelight that now shines on him. "I do not care for honors or awards," he says. "They embarrass me."

Coleman has created yet another post-retirement role for himself: philanthropist. With his share of the $1 million Shaw Prize award, Coleman established two $100,000 endowments at The Jackson Laboratory to support research and education. The Douglas Coleman Research Fund supports Laboratory investigators, with preference given to early-career scientists who are studying obesity and diabetes. The Beverly Coleman Memorial Fund supports young students and educational programs.

"I never expected all these accolades," Coleman says, "and my two sons are already financially stable. So I wanted to make a contribution to future scientists."

In July 2012 Coleman received The Jackson Laboratory's Philanthropy Award in recognition of his generous donations. It's somewhat ironic that what may be Coleman's greatest research contribution is only peripherally related to the work that garnered all the awards.

His longtime friend and colleague, Professor Emeritus Ed Leiter, Ph.D., a renowned authority in type 2 diabetes, points out that Coleman was the first to recognize the importance of genetic background in understanding diseases. Before he came to The Jackson Laboratory, Leiter reviewed a paper by Coleman and others showing that the same mutation led to different effects in different strains of mice. Leiter says that paper, now widely hailed as a hallmark in genetics, established the influence of "modifier genes," other genes that enhance or reduce the effect of a specific mutation. "Since then searching for genetic modifier genes has been a mainstay of Jackson Laboratory research," he says.

Science dominated much of Coleman's life, but today it is just one of many interests. "I'm glad my career was when it was," he reflects.

He enjoyed the hands-on, almost artisanal aspects of 20th century research. "We had to synthesize our own reagents. To me this proved you were a real chemist, what we were trained for. Today everything comes in a kit!"

And unlike today's researchers, who spend most of their time seeking grant funding to support their work, he notes, "Ed (Leiter) and I, and our peers, had the luxury of spending full time at the bench doing our research ourselves, not delegating it to others. Grants were easy to get and were not hard to write."

The Jackson Laboratory provided Coleman with a close-knit environment that was very different from the university setting he was trained in.

"Here it was more like a family, with people from different disciplines interacting every day," he says. "I came here as a biochemist and got into biochemical genetics, and became a jack-of-all-trades. I'd never find another group of colleagues like this anywhere else."

In looking back over his career, he likes to quote Louis Pasteur, who said, "Luck favors the prepared mind." Says Coleman: "My mind was prepared by many mentors at The Jackson Laboratory."