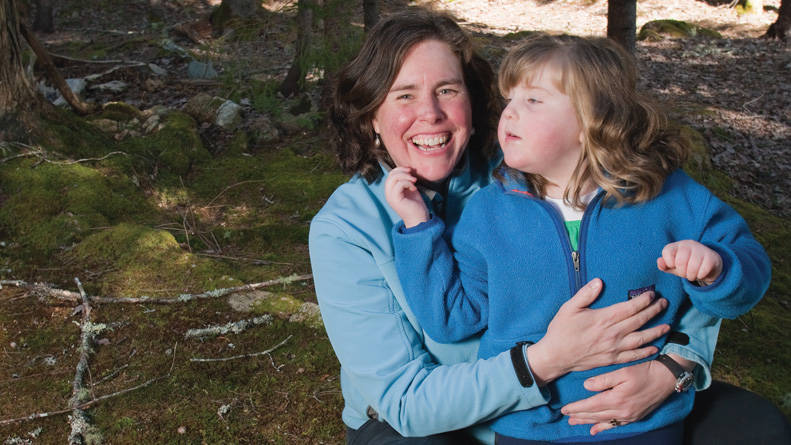 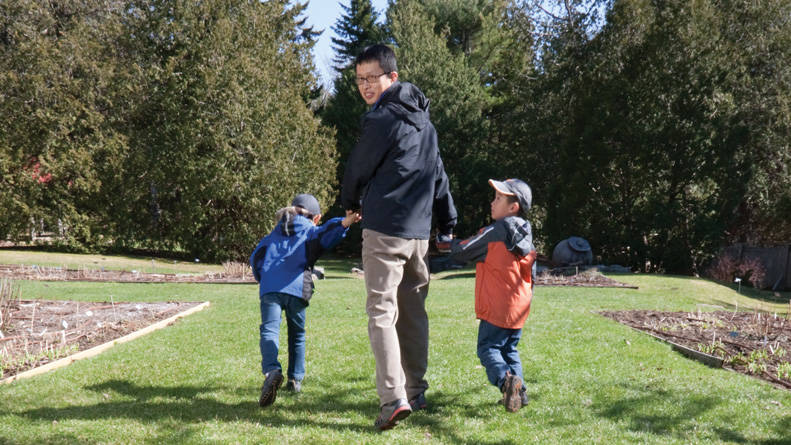 Ask a new parent what he or she is most worried about, and it won't take long before the word "autism" comes up.

The Centers for Disease Control and Prevention estimates that one child in 110 has some version of a so-called autism-spectrum disorder. But a recent study in South Korea bumps that to an alarming one in 38, suggesting that many milder cases are going undiagnosed.

Autism-spectrum disorders such as Asperger's syndrome, autism and Rett syndrome share certain characteristics, including social withdrawal. Patients also show impaired language skills, repetitive behaviors and motor disabilities. In severe cases these symptoms can affect the very tools humans have to connect with one another, to communicate, to feel empathy, to build families and friendships.

At The Jackson Laboratory, Assistant Professor Zhong-wei Zhang, Ph.D., is working to understand the causes of Rett syndrome as well as autism-spectrum disorders in general. "These are all developmental disorders of the brain, and they all show defective communications between neurons," Zhang says.

Eliza's a reminder that there's this whole spectrum of disease presentation—it's not one size fits all.

Autism-spectrum disorders are among the most genetic of neuropsychiatric diseases, and may involve many genes important for brain development.

In the case of Rett syndrome, about 99 percent of patients have mutations on a single gene, MECP2. This gene provides instructions for making a protein that regulates the production of many other proteins in the brain. The mutations in the gene, which appears on the X chromosome, have severe developmental consequences. Because girls have two X chromosomes, a second, healthy copy of MECP2 more or less compensates for the defect. Male embryos with the mutation, lacking this second copy, seldom survive more than a few days past birth.

A baby girl with Rett syndrome may appear to develop normally in the first eight to 16 months of age, but then her brain stops growing and may even reduce in volume. Tragically, Zhang notes, "they may lose the language ability and motor function they've already acquired." Function in later life varies from patient to patient, but many are wheelchair-bound with severe physical disabilities; some never learn to speak or make emotional connections with other people.

The human brain has about 100 billion interacting neurons, earning it the title "most complex object in the known universe." During development, connections form between neurons, then some of these connections are pruned away and new ones made in an almost unimaginably intricate rewiring process. That this process sometimes goes wrong is probably not surprising.

Healthy brain function, Zhang explains, involves "a kind of yin-yang balance" between excitation, which makes neurons more active, and inhibition, which reduces that activity. "These disorders appear to involve a disruption in the balance in selective regions of the brain, and both excitation and inhibition are affected in Rett syndrome and, most likely, other autism-spectrum disorders."

Zhang says he expects more Rett-related mutations to be discovered as researchers comb through the genomes of patients. "Where I think I can make a contribution," he says, "is to understand how those mutations relate to the disease and then try to come up with ideas for treatment. Ideally, we would want to design interventions that are early enough—before the onset of Rett syndrome—to prevent the disease from happening at all."

"Watching my sons grow has provided a fascinating glimpse at how the brain develops," he says, speaking of grade-schoolers Simon and Alain. "They go through periods of accumulating lots of new language and social skills, and then they hit these little plateaus when they're not learning as much. It's possible to imagine that some patients with autism-spectrum disorders become stuck in these plateaus. And it gives me hope that it's possible to overcome them."

Building on the discovery of the MECP2 mutation by Huda Y. Zoghbi of Baylor College of Medicine, several researchers developed mouse models containing the mutation. Most notably, in 2007 the journal Science published the work of University of Edinburgh researcher Adrian Bird, Ph.D., demonstrating the reversal of Rett syndrome in mature mouse models with late-stage disease.

While these mice reflect the classic, severe symptoms of Rett syndrome (including the slowdown and reversal of brain development, reduced interaction with other mice and decline in motor skills), they don't reflect the great range of variation among Rett patients. Lutz is out to change that, inspired by an extraordinary little girl.

The first thing anyone notices about Eliza Sprague is her warm and outgoing personality: She's a hugger and a giggler. She's also bright, active and coordinated; she loves music and she loves to dance. "For someone who's supposed to have poor motor skills," says her mother, Meghann Harris, "she can bean her dad with a baseball with great accuracy."

Eliza's departure from the "standard case" of Rett syndrome is why Lutz is interested in her condition, as well as captured by her charm. Lutz is responsible for ensuring that the best mouse models of human diseases—ALS, Parkinson's disease and Rett syndrome, to name just a few—are available to the worldwide scientific community.

Lutz says she met Harris' parents-in-law through her husband in 2009, and learned about their granddaughter's diagnosis of Rett syndrome. Soon after, Lutz contacted Harris and the two met for a long walk around the local YMCA indoor track, Eliza in tow.

He declared Eliza would never walk or talk and would be mentally retarded. It was heartbreaking, you know?"I've really enjoyed getting to know Meghann, her husband Shawn Sprague, and her kids Eliza and Henry," Lutz says. "When you think of all the papers you've read, all the scientific meetings you've gone to, you don't really get the parent's perspective. Eliza's a reminder that there's this whole spectrum of disease presentation—it's not one size fits all."

In fact, while Eliza does have a mutation in the MECP2 gene, her specific mutation has never before been documented—just the kind of discovery that Zhang predicted will begin to emerge more frequently now that genetic testing for suspected autism-spectrum cases is increasing.

He declared Eliza would never walk or talk and would be mentally retarded. It was heartbreaking, you know?

Harris says Eliza was born with great Apgar scores, the standard test of a newborn's condition. After early breast-feeding problems were resolved, the baby appeared to be growing normally, but then Harris—a first-time mom—started to notice she was missing some of her milestones. "She didn't track with her eyes at 1 month, and she didn't roll over at 3 months, and she didn't sit up at 6 months, and she didn't take first steps at a year. She was always just a little bit behind."

At Eliza's 1-year checkup, a new pediatrician immediately referred her to a neurologist. "I was shocked," Harris says. "I didn't see it coming. No one had said anything to us at the 3-, 6- and 9-month visits. But evidently her head circumference had started to plateau instead of following the bell curve, and that was a huge indicator that something was awry."

And when the neurologist turned up the unique MECP2 mutation, Harris says, "He said he wasn't able to confirm or deny that this mutation was causing her symptoms, yet he declared she would never walk or talk and would be mentally retarded. It was heartbreaking, you know?"

Harris was determined to prove that neurologist wrong, and she and Shawn have worked tirelessly with Eliza to build her physical and mental skills. "She did eventually roll over, sit up, hold a stand, and at 20 months, one of the happiest days of my life, she took her first step. We went to the YMCA every single day and passed her between Shawn and me, and just taught her to walk. She did it—she never complained. She works so hard at improving." Harris adds that in addition to improving her gross motor skills, Eliza continues to gain language.

Harris describes Lutz as "a great resource for educating me and keeping me up to date. She's also been great at introducing me to other key people in the Rett community. She introduced me to Monica Coenraad, who's the executive director of the Rett Syndrome Research Trust in New York City, and then Monica, who is a parent of a child with Rett syndrome herself, introduced me to a specialist in New York.

"Cat has broadened my whole world. She's just phenomenal," Harris says. "She also has taken such an interest in Eliza that she's really advocating for her. When she goes to these meetings around the country, she brings Eliza up and people are starting to get interested in Eliza's milder form of Rett. Now she's even talking about developing a mouse model of Eliza. It's just so cool!"

According to Lutz, this bold "Eliza mouse" concept fits with The Jackson Laboratory's goal to expand the number and quality of resources available to Zhang and other scientists studying autism-spectrum disorders.

"The mouse models that have been developed so far are the most classic mutations," Lutz says, "the ones that are found most often found in patients with severe symptoms. But rare mutations like Eliza's could provide a window of knowledge into cases of atypical Rett syndrome that are so mild they might even escape diagnosis, and which may require altogether different drug development strategies."

Harris calls her little daughter "amazing" and says "she's constantly surprising people. She teaches me every day how to enjoy life, laugh, push through challenges and reach my goals. I believe that The Jackson Laboratory is going to find a cure for Eliza in my lifetime."

(Postponed to 2022) Modeling Hearing and Balance Disorders in Mice: The HEar@JAX Workshop