Finding a way to give 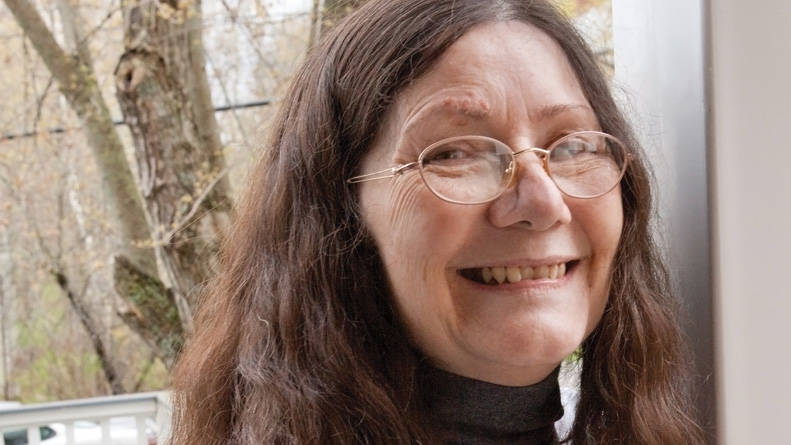 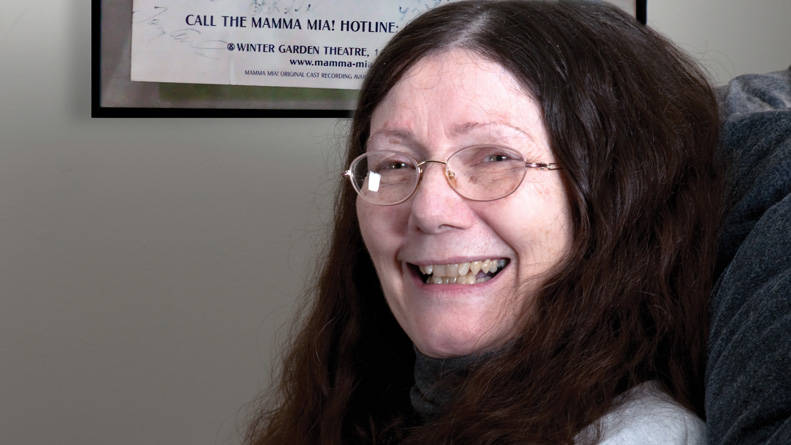 Just as amyotrophic lateral sclerosis (ALS) claimed the life of New York Yankees Hall of Famer Lou Gehrig in 1941, Huntington's chorea is best known for robbing American culture of another popular folk figure—singer and songwriter Woody Guthrie, who died in 1967.

American physician George Huntington first documented the progressive degenerative brain disorder in 1872. The term "chorea" was added as a derivative of the Greek word for "dance," as one of the disease's signature characteristics is involuntary, jerky body movements. About one in 10,000 Americans carries the defective gene that can trigger the disease. Those with a gene defect for Huntington's have a 50-50 chance of passing it on to their children.

I have everything I need, and I want to help find a cure for this disease. It's important that I do this. It matters.

A Husson College graduate and former certified public accountant, Cathy Alley lives in Richmond, a small town north of Portland, Maine. Her small apartment within a public assisted housing project is one of many clustered inside the aging and long-abandoned three-story, red brick Richmond High School building. Despite seemingly living from hand to mouth, she began sending money to The Jackson Laboratory in September 2010 to help with its ongoing Huntington's research.

"I have everything I need, and I want to help find a cure for this disease. It's important that I do this. It matters."

"When I have extra money at the end of the month, I send it so that the researchers at the Lab can help people like me who have this," she says, a thought that requires a very difficult three minutes of vocal expression. She speaks two or three words at a time, each phrase bursting forth like a long-suppressed cough. Her words are punctuated by long, lingering and uncomfortable silences as she musters the urge, the courage and the physical ability to make herself understood. Contributing significantly to basic research on Huntington's, she says, was on her "bucket list," as were her recent trips to New York City to take in "Mamma Mia!" on Broadway and to see rock star Sting in concert. Among her prized possessions is a Cirque du Soleil coffee mug, a souvenir of another excursion to Manhattan's theater district.

Having grown up in Bar Harbor, home to The Jackson Laboratory since 1929, Cathy Alley knew all about the Laboratory before genetic disease began ravaging her family. She was at her mother's side in 1992, when she died of Huntington's chorea in a nursing home at age 55. "I've always known people who work there," she says of the Laboratory. "I believe in research, and I don't have those horrible credit card bills each month, so I can [make a donation] if I have something left over at the end of the month."

While there is no in-house research team focusing exclusively on Huntington's, The Jackson Laboratory contributes to such research worldwide by providing an expanding array of genetically engineered mouse models that mimic the disease as it is expressed in humans. There are now several different models available, each providing a unique expression of Huntington's disease onset and severity. Some models are engineered to facilitate study of the brain and central nervous system function affected by the disease, while other models are more suited for studies of the voluntary muscle movement impairments associated with Huntington's.

"One of the most promising therapeutic strategies for Huntington's is to target the expression of the Huntington mutant protein," says Research Scientist Cathy Lutz, Ph.D., director of The Jackson Laboratory's Genetic Resource Science Repository. "If we turn off the expression of the disease-causing gene, we can halt the progression of the disease. The existing mouse models we offer are used extensively for this purpose and have allowed for the identification of many promising new therapies."

The Jackson Laboratory's in-house research into the biomolecular mechanics of the neuromuscular degeneration associated with ALS dovetails with the biomechanics associated with Huntington's chorea.

"Understanding what sickens motor neurons— which trigger voluntary muscle response—in these late-onset neurological disorders is critical for designing rational therapeutic strategies," says Associate Professor Gregory Cox, Ph.D., whose research at The Jackson Laboratory is centered on ALS. "Unlike ALS, which has both genetic and sporadic forms, Huntington's disease has a single genetic cause that has allowed researchers to focus their efforts in a single direction. We hope to learn from the specific strategies employed in Huntington's disease to target our treatments to the spinal motor neurons in ALS animal models and, ultimately, in patients like Cathy Alley."

Given Cathy Alley's somewhat fragile financial circumstances, a Jackson Laboratory Development officer tried—and failed—to persuade Cathy to re-think her plans of making additional contributions. "I have everything I need, and I want to help find a cure for this disease," she told the officer. "It's important that I do this. It matters."