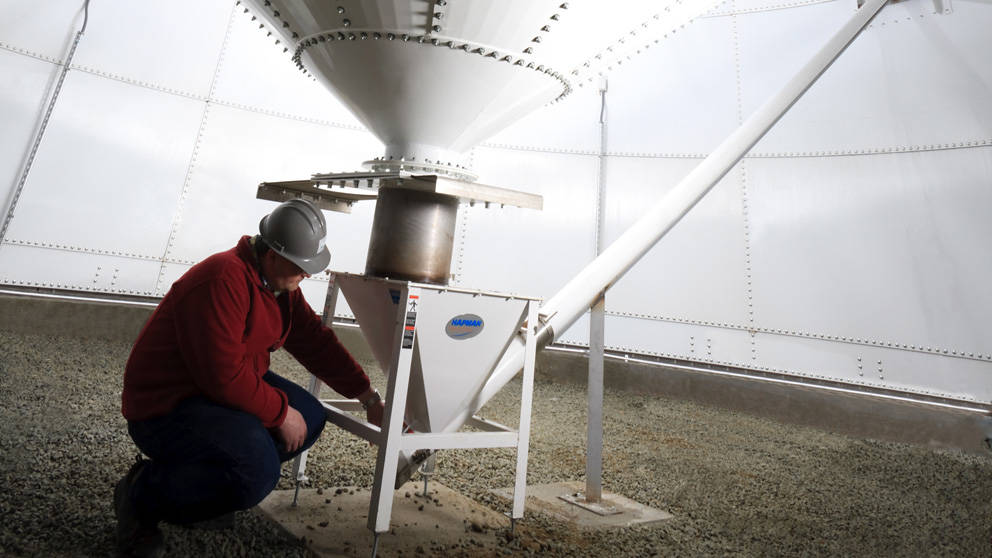 After years of planning and construction, The Jackson Laboratory is now using Maine sourced wood pellets to help power its campus.

Working with Petrokraft, a Swedish company specializing in high-performance, low-emission boiler systems, the Laboratory in 2011 fired up a biomass boiler that is the epitome of state-of-the-art efficiency in generating steam for conversion to electricity. Not only does the wood-burning plant significantly reduce the Laboratory's fuel oil consumption and greenhouse gas emissions, its design provides energy at a lower cost, significantly cutting the Laboratory's utility costs.

"This biomass boiler is reducing the Laboratory's fuel oil consumption by 75 percent, which is about 1.2 million gallons a year," says John Fitzpatrick, the Laboratory's senior director for Facilities Services. "It is allowing us to replace foreign-sourced heating oil with wood pellets that are Maine grown, Maine harvested and Maine processed. In year one, we are looking at savings in the range of $400,000 to $500,000, just by switching fuels. And there are huge savings environmentally. We’re removing 13.5 thousand tons of CO2 (carbon dioxide) a year from our emissions profile.”

Given our demand for wood pellets, we are putting $1.8 million into Maine's forestry and manufacturing industries.

The $4.4 million biomass boiler project is the most ambitious endeavor to date in the relentless effort to operate the Laboratory in efficient and environmentally friendly ways. Funded with the help of a $1 million grant from the Efficiency Maine program, the project marks a significant achievement for both the Laboratory and the state. The project earned the designation “Renewable Energy Project of the Year” in 2013 from the Association of Energy Engineers for the northeastern U.S. region.

The Petrokraft boiler uses wood powder as its primary fuel. The wood arrives in the same pellet form that is already widely available as fuel for household pellet stoves. Tankers deliver 32 tons of pellets at a time, storing them in an on-site silo. As needed, the pellets pass through hammer mills, which crush them into a fine, powdery sawdust conveyed to the boiler for combustion.

"This boiler is supplying the Laboratory with about three-quarters of its power needs," says Facilities Engineer Norm Burdzel. "For their residential heaters, people usually buy 40-pound bags of wood pellets. This boiler burns two bags' worth of pellets every minute. We have a dumpster to collect the ash, but the burner is so efficient that only a tiny fraction of the raw wood fuel—.5 percent—emerges as ash. We anticipate emptying the dumpster only once every 45 days."

While the technology was commissioned from a Swedish supplier, the project represents a Maine-based effort. "Given our demand for wood pellets, we are putting $1.8 million into Maine's forestry and manufacturing industries," says Fitzpatrick. Adds Charles Hewett, Ph.D., the Laboratory's executive vice president, "Our new pellet boiler, the largest of its kind in North America, is a win-win-win for the Maine environment, the Maine economy and The Jackson Laboratory. Substituting pellets for imported oil reduces the emission of carbon dioxide and sulfur dioxide; it will support and maintain dozens of Maine jobs; and at current fuel prices it will save the Laboratory nearly $2 million a year in energy costs."

The biomass boiler's large annual infusion of revenue into Maine's economy also enhances The Jackson Laboratory's status as one of Maine's economic pillars.

"Nearly 94 percent of our revenues is derived from out-of-state and out-of-country sources," says Hewett. "Eighty-five percent of that revenue—nearly $75 million—is spent in the state. In a time of fragile economic stability, The Jackson Laboratory is delighted to be part of the solution in terms of shoring up Maine's economy."

The completion of the Laboratory's biomass boiler marks a beginning, not an end. Going forward, the boiler must operate efficiently and reliably for many years to come. Jason Chapman shakes his head.

"The boiler presents a significant challenge. There are so many rotating parts. Each burner assembly has 125 wires leading to it. We're going to have to get a really solid baseline before it goes online and monitor it closely."

Chapman's official title is "Maintenance Mechanic II," but that's a woefully inadequate descriptor by now. In less than four years, he has developed skills that, appropriately enough, make the maintenance of the Laboratory's complex machinery a technical science unto itself. Chapman brought with him a solid mechanical background, but since joining the Laboratory in 2007, he has acquired state of Maine licenses as a Journeyman Plumber, Journeyman Electrician, Journeyman Oil Burner Technician and is completing his certification as a Vibration Analyst.

"The sky's the limit with this place," he says. "If you have a good attitude and are willing to learn, you can go anywhere here. It's all about what you want to do and what responsibilities you are willing to take on. The opportunities are showing up every day."

The opportunities include complicated equipment such as the new boiler. Vibration analysis is a highly technical skill that allows Chapman to characterize mechanical vibrations and use them to actually predict when equipment will fail.

"We can detect a bent shaft, misalignment, bearing faults or even a loose bolt," says Chapman. "We can detect faults before a machine breaks down and slows production. We use the data collected from our vibration analysis to predict when a machine will fail, and we do what we can to prevent that, which improves reliability and saves money."