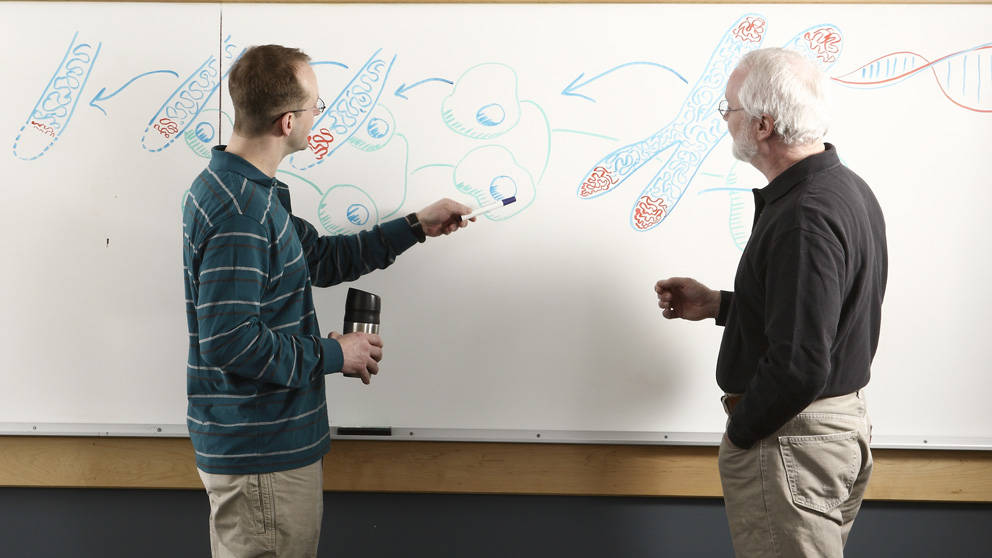 Headlines all over the world reported The Jackson Laboratory's breakthrough findings: Mice receiving the drug rapamycin lived significantly longer than untreated mice. The mice in the experiment were 20 months old when they received the treatment—in human terms, that's almost Social Security-eligible—and their lives were not just longer but healthier, with the usual diseases of aging postponed.

So is an anti-aging pill on the horizon? "Not so fast," says Jackson Professor David Harrison, Ph.D., who led the research team that included scientists at the University of Michigan and University of Texas Health Sciences Center. Rapamycin suppresses the immune system, he explains, and helps prevent rejection of transplanted kidneys and other organs. It works by adjusting cell growth and other cell functions in response to environmental cues.

"But it also makes you much more vulnerable to infectious diseases," Harrison cautions. "So no one should take this drug in hopes of living longer. It may do more harm than good, as we know neither optimal doses nor when it should be taken to obtain anti-aging effects."

The research illustrates that fundamental cellular processes throughout your body are in control of how fast, or how slowly, you age. Scientists at The Jackson Laboratory, a National Institute on Aging Nathan Shock Center of Excellence in the Basic Biology of Aging, are investigating these processes to find new opportunities for increasing healthy lifespan, or "healthspan."

From a strictly biological standpoint, growing old is a luxury. Maintaining our species requires us to live long enough to reproduce and, if possible, raise our offspring to childbearing age. According to Centers for Disease Control statistics, in 1900, the average American lifespan was just 49 years; about 10 percent of infants (a whopping 30 percent in some cities) died before their first birthday, and almost 1 percent of women died in childbirth.

Today, thanks largely to modern public health advances including antibiotics, better sanitation and control of once-lethal childhood diseases such as type 1 diabetes, an American man can expect to live past his 78th birthday, a woman to nearly 81. That's a whole generation's worth of life.

Unfortunately, those three "bonus" decades can come with many serious health complications.

"The fact is," says Kevin Flurkey, Ph.D., a research scientist in Harrison's lab, "our genes are designed to develop our bodies to an optimal state for our reproductive years. After that, our cells keep dividing and our genes keep working, but evolution has no good reason to continue that optimal state.

"This will be obvious if you've ever chased your grandchild around the yard or tried to match the athletic feats of your youth," Flurkey adds.

Right now, every one of the trillions of cells in your body is in some stage of renewal. We start out life as a single-celled egg that gets fertilized. Then cell division takes over, first to build an adult human being and then to maintain all those cells. Every time a cell divides, so do your chromosomes, and there's always the chance a little DNA can be lost in the process.

...each chromosome end is capped with structures called telomeres. Since chromosomes are linear, you can picture them like shoelaces that are made extra-long, with little plastic tips to protect the ends.

Jackson cancer researcher Rick Maser, Ph.D., explains, "Cells cope with this by putting what we think of as irrelevant, repeating DNA sequences at the end of chromosomes as a kind of buffer zone. And, each chromosome end is capped with structures called telomeres. Since chromosomes are linear, you can picture them like shoelaces that are made extra-long, with little plastic tips to protect the ends."

As we get older, Maser says, repeated cell divisions can eat away at the buffer zone and protective ends, exposing the DNA to damage. "We clearly see that happening in older individuals, and it may be one of the contributors to aging," Maser says. "All kinds of errors can be introduced that way, some benign and some deadly. For example, if you break a chromosome apart you can lose an important gene on that end segment that doesn't get carried onto the daughter cells. If that gene is p53, a really important tumor-suppressor gene, that gene is now lost and you're that much more susceptible to cancer."

Intriguingly, our bodies also produce a kind of shoelace-repair kit in the form of telomerase, an enzyme that has a unique ability to bind to chromosome ends and synthesize more of those repeats. "There might be applications where you might want to add back telomerase," Maser says, "for instance, where lung tissue is degrading because of disease, or knees are deteriorating due to repetitive injury. A little bit of telomerase, carefully administered for a short period of time, could rejuvenate the tissue."

However, there's a big caveat to thinking of telomerase as a fountain of youth: Telomeres also protect cancer cells and allow them to continue dividing.

"You don't want to take a pill to activate telomerase throughout your body," Maser warns, "because you might have some cancer cells you don't even know about that could start growing inappropriately."

Cancer: the ultimate disease of aging

"It's clear that aging is the biggest risk factor for cancer," says Associate Professor Kevin Mills, Ph.D. "You can think of age as the most potent carcinogen. And at the same time, cancer is maybe the biggest disease of aging. So there's this very intimate relationship between the two, and it's not totally obvious what that is. Why do we become so cancer-prone as we age?"

Mills investigates chromosome damage and repair mechanisms in aging and cancer. He notes that in early life, we have "souped-up repair mechanisms" that help us through our reproductive years. "DNA damage may occur, but it's counterbalanced by repair." At some point during aging, repair mechanisms can no longer keep up with accumulated DNA damage, raising the risk of cancer.

In theory, Mills says, there's no biological imperative to maintain those energy-intensive protective mechanisms in older individuals, so they decline. "That's all very speculative, but these evolutionary theories of aging are important in thinking about why we have these changes in repair mechanisms over time," Mills says.

It's an odd fact of life that very elderly people actually have lower cancer incidence than people in their 50s, 60s or 70s. "In young individuals, cancer incidence is generally low, and it increases exponentially with age," Mills says. "And in very aged populations it drops again. So this would suggest that here you're in this protected phase in youth, then you move into a cancer-risk phase in late middle age, but then you get out of cancer risk and you get just degeneration."

Cells in very old individuals appear to be less metabolically active, Mills explains, leading to slower accumulation of damage, "but we think because the DNA repair mechanisms have virtually disappeared, the damage continues unabated."

Besides cancer risk, researchers have identified a long list of physiological changes that occur naturally during the aging process. According to Flurkey, these "biomarkers of aging" are normal and are not in themselves consequences of disease, but may contribute to diseases associated with aging.

For example, bone density changes, a situation that may or may not lead to osteoporosis. Collagen, present in cells throughout the body, becomes stiffer—a mild irritant when it results in creaky knees, but a major health hazard when it hardens arteries. Changes in the immune system mean you're protected from the same flu you got 10 years earlier but are less able to fight this year's strain.

Flurkey and Harrison are now looking into how rapamycin affects these specific biomarkers, and are also now in the process of testing several other drugs for their anti-aging properties. And in work that spans the nearly four decades of Harrison's research at Jackson, they are exploring specific gene variants that are associated with long lifespan.

Until the biological secrets of aging are unlocked, lifestyle changes are the best path to a long and healthy life. According to Flurkey, "recent studies of healthy and very long-lived people overwhelmingly show that plenty of exercise, no smoking, moderate drinking, a plant-based diet and stress reduction make a difference. It's all about making the most of your genes."