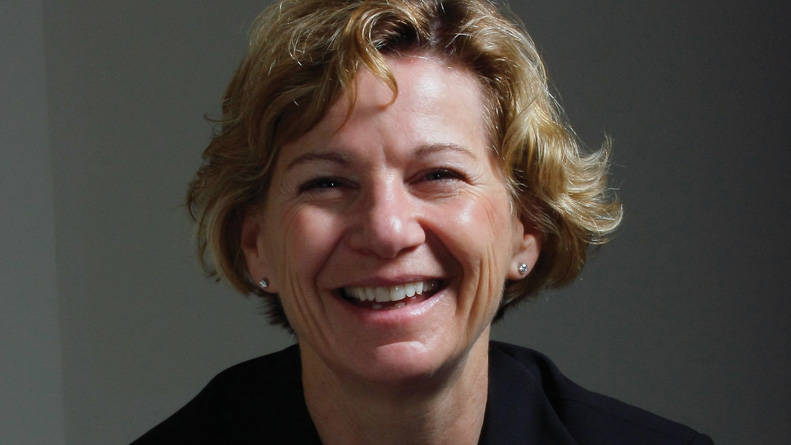 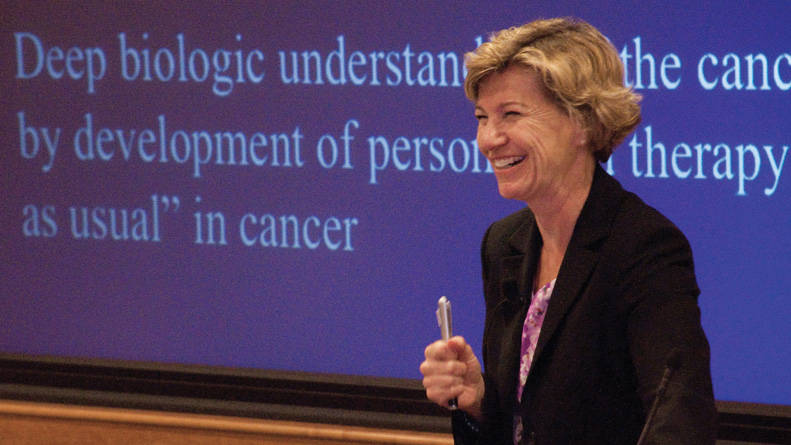 Dr. Susan Desmond-Hellmann is the incarnation of The Jackson Laboratory's institutional passion: Leading the search for tomorrow's cures.

Desmond-Hellmann was chancellor of the University of California, San Francisco (UCSF) for five years before being named Chief Executive Officer of the Bill & Melinda Gates Foundation in 2014. A former physician whose clinical curiosity was centered on cancer, she spent 14 remarkably successful years immersed in cancer drug development research at the pharmaceutical giant Genentech. That work resulted in an ever-expanding inventory of new drug treatments that now offer hope to patients battling advanced forms of breast, colon and lung cancers.

In the summer of 2010 Desmond-Hellmann made her first trip to Maine to deliver the keynote address at The Jackson Laboratory's Discovery Day event. She was first introduced to the Laboratory by Dr. Julius Krevans, a former UCSF chancellor and a long-time member of the Laboratory's Board of Trustees. In his introductory remarks to the Discovery Day audience, Krevans described his "quite extraordinary" successor at UCSF as "one of the most powerful women in academic medicine and pharmacology in the United States and the world."

In her speech, Desmond-Hellmann stressed the importance of basic science research in preventing, treating and curing cancer and other intractable genetic diseases.

Great science like the work being done here is going to make life better for human beings.

"Great science like the work being done here is going to make life better for human beings," she told her Discovery Day audience. "I want to change medicine. And I don't want things to be a little bit better, but a lot better. In terms of cancer patients, extending their lives is good, improving their quality of life is good, but curing their cancer is best."

Desmond-Hellmann understands that there is no such thing as turn-the-crank biology. "The reason that we had wonderful success at Genentech is that great science creates great things for patients," she says. "But great science isn't enough by itself. You still need great translation and clinical medicine, but nothing happens without great science. The basic, basic biology of knowing what happens on a molecular level is essential to understanding what's going on at the genetic level.

"You could put a bunch of robots at The Jackson Laboratory to do gene sequencing and animal work, but science isn't a widget factory," she continues. "Science is about thinking, paying attention and deeply learning and understanding. The best scientists I know—basic scientists and clinical scientists—pay attention. Even with the human genome, there are still people who think we can just plug in a computer and a gene sequencing machine and all of truth about biology and life will spit out the other end. Wrong. It still needs thinking, collaboration and brainpower. It isn't plug and play."

Born in California's Napa Valley, Desmond-Hellmann was one of seven siblings with grandparents who had emigrated from the wilds of western Ireland. While growing up in nearby Nevada, she often lingered in her father's drugstore in Reno, listening to his discussions with local doctors and their patients. A self-described "fierce" student, she went on to earn her medical

Desmond-Hellmann and her husband spent two years as visiting faculty at Makere University in Kampala, Uganda. While in Africa they taught and did research on HIV-AIDS and cancer. Upon returning to the U.S., she went into private practice in Kentucky, doling out what little hope existed 25 years ago for patients with advanced cancers.

"Being a full-time community doctor in Kentucky taught me how difficult it is to treat cancer patients and how awful it is to have a conversation with a cancer patient when you've run out of ideas or helpful therapies," she says. "I just hated that. I felt like such a failure. I knew how bad it was for the patients and their families. It wasn't as physically demanding as other things I've done, and yet I would feel exhausted on those days when I had to give people bad news. And there were plenty of those days, especially if it was a relapse."

Her work in drug development—two years at Bristol-Myers Squibb and another 14 years at Genentech—was rooted in her passion for taking on cancer.

"I worked so hard for 16 years, harder than on any other thing I've done," she recalls. "There was a sense of urgency and the ability to make a difference, and you could really see things change. It wasn't just seeing our teams of scientists and clinicians develop all these wonderful drugs; it was literally how people think about cancer treatment. I left private practice having discussions about hair loss, nausea, vomiting and running out of great things to try, and I go to a world where I was part of changing things so they're not like that anymore. And they are not; it's much better. I'm not declaring victory, and it needs to get better still, but I was able to see clearly that, if you do really great science and really great product development, wonderful things happen. Man, that was awesome."

Desmond-Hellman is something of a pioneer in the emerging science of personalized medicine—using genetic insights to deliver the right drug at the right time in the right dose to the right person. In November 2009, Forbes magazine named her as one of the world's seven most "powerful innovators," calling her "a hero to legions of cancer patients." The seven were selected for their curiosity, empathy and leadership.

"Everybody's excited now about personalized therapy," she says. "The new and different impediment now is how expensive, unreliable and unpredictable drug development is. If you had a more cost-effective way of doing drug development, a company could afford to invest in finding therapies for orphan diseases [diseases that affect relatively few people]. We can do one of those every now and then, but that has to be balanced by oncology products in breast cancer, colon, lung and others that affect large numbers of people. The issue now is using all we're learning to make drug development quicker and, for patients, more reliable and affordable. We need to take advantage of all these remarkable discoveries, and we need to do that in our lifetimes. I'm over 50 now; I want to see this happen while I'm alive. It will require hard work that sometimes involves going down paths that don't work out.

Desmond-Hellmann describes as "chaotic" the indefatigable career path that took her to the pinnacle of academia. She says she brought to the many challenges of her position at UCSF an incredible passion for making life better for patients. "I'm a clinical doctor at heart," she says. "I wanted Genentech to succeed, and I wanted us to improve things. That drive and that passion were really important parts of my contribution. I love learning. I'm inquisitive. I'm a junkie for data and information. On the negative side, I have a bit of a short attention span. It's not that I'm bored; I just need new things. I like learning, and I seem to have learned the most when I've been a little bit uncomfortable, working out of my comfort zone."