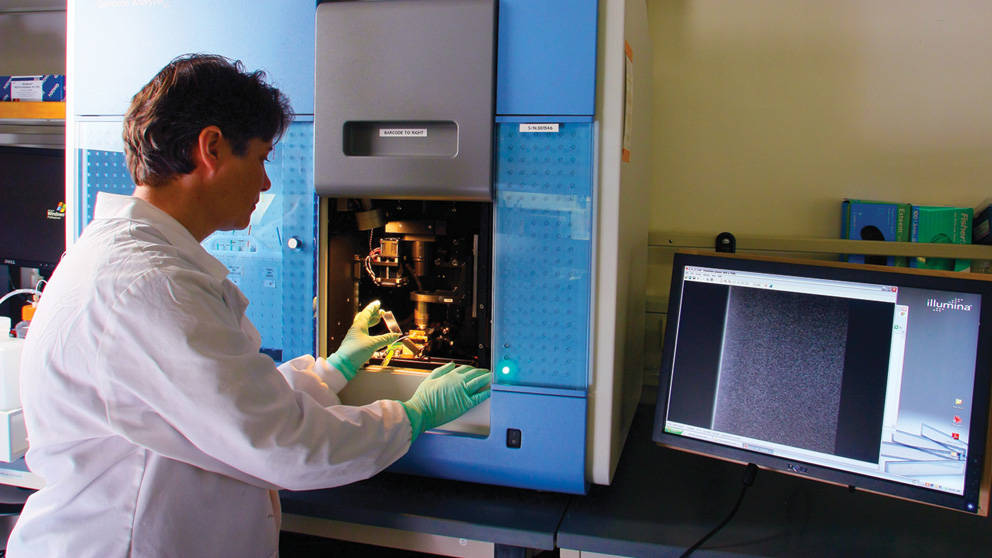 Eric Antoniou, Ph.D., and Sandy Daigle are working with power these days. A lot of it.

Antoniou, who manages The Jackson Laboratory's gene-expression services, and Daigle, a gene-expression technician, are in charge of running the Laboratory's new Illumina "nextgen" (next generation) sequencer. Their work reveals the composition of DNA in cells, which is made up of the DNA bases A, T, C and G. Sequences of those letters represent each gene or genetic region. Sequence data are at the heart of genetics research.

Until recently, the Laboratory relied on a sequencer that uses what is known as the Sanger sequencing method, which yields sequences of around 1,000 bases. Now, with the Illumina sequencer, Antoniou and Daigle are producing sequences of millions of bases at a time. The Illumina technology is about 35,000 times more powerful than the Sanger method, allowing researchers to discover what's happening across entire genomes with far better precision.

It's like trading hiking boots for a supersonic jet when you have a long distance to travel.

The Illumina will dramatically speed up discovery using JAX®Mice models.

"With the old sequencer, pinpointing a mutated gene was very expensive and very slow—it could take years," says Antoniou. "And researchers sometimes still couldn't find the mutation and would have to give up. With the Illumina the same process can take as little as a few weeks. The Illumina will dramatically speed up discovery using JAX®Mice models. Scientists can now get right to studying the molecular mechanisms of the diseases."

This giant leap alone would be sufficient reason to acquire the sequencer, but it's only one of the instrument's many applications. In fact, Laboratory scientists already have developed experiments that take full advantage of its capabilities and capacity. The sequencer can reveal what genetic sequences are actually being expressed, how modifications to the DNA structure itself (the DNA-protein complex known as chromatin) regulate gene expression and new ways to study cancer.

Associate Professor Kevin Mills, Ph.D., is interested in the latter, and he foresees enormous benefits for his research.

"The Illumina sequencer speeds things up by an order of magnitude, and at the same time you obtain results that are much more precise," says Mills. "We work with translocations [exchanges of genetic material between chromosomes] in cancer, and this technology will now give us the ability to find the exact place where the translocation occurs, right down to the single base level."

Even more exciting is the potential to do experiments—and make discoveries—that were previously so prohibitively time and labor intensive that they wouldn't even have been attempted.

"For example, tumors can be very heterogeneous. That is, they have many different kinds of cells in them, some very rare like cancer stem cells," says Mills. "It wasn't at all practical to characterize all the different genotypes before. Now we can do that much more thoroughly, and look at all the different cell types in a tumor very efficiently. It's a huge step forward for our cancer research."

The workings of nextgen sequencers are complex. The Illumina machine uses fragmented sample DNA, a DNA template, fluorescent dyes combined with lasers and precise optics, and other high tech machinations to generate a complete genomic sequence. The output, in the form of images that capture patterns of bases labeled with the fluorescent dye, is massive. It will put significant new demands on the Laboratory's data management and storage capabilities.

The Illumina sequencer's overall efficiency and cost-effectiveness is astounding, however. Acquiring the sequence of an entire mammalian genome takes roughly two weeks and less than $50,000. And it takes place within a box that sits on a normal lab countertop. Compare that with the Human Genome Project, an international effort that published the first complete human genome sequence in 2002. It took more than a decade and $3 billion, which shows just how far and how fast sequencing technology has progressed.

Funded by the Maine Technology Asset Fund and the National Center for Research Resources, the Illumina sequencer is the first of its kind in Maine. It will also be available to researchers at collaborating institutions, including the nearby Mount Desert Island Biological Laboratory, the University of Maine, the Foundation for Blood Research and the Gulf of Maine Research Institute.