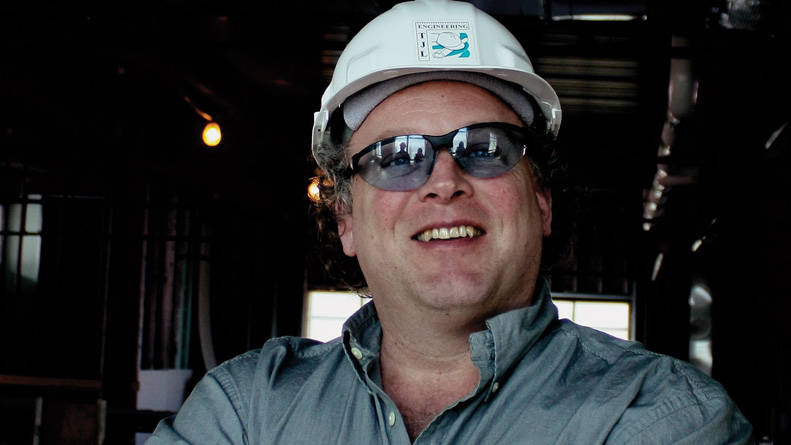 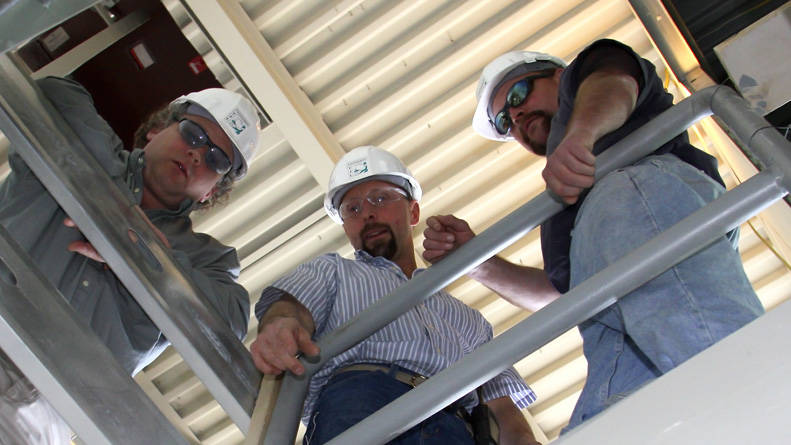 The lure of a college buddy's seaside lobster bake brought a young John Fitzpatrick from his native New York to Downeast Maine in 1986.

Almost three decades and a full head of hair later, he's still here. As the senior director of facilities services at The Jackson Laboratory in Bar Harbor, Fitzpatrick now juggles the ever-changing challenges of keeping Laboratory facilities in Maine, Connecticut and California up and running 24/7/365.

"I consider myself extremely fortunate to be surrounded by co-workers who look beyond job descriptions and do whatever it takes to support The Jackson Laboratory's mission and its round-the-clock operations," he says. "It takes a lot of collective skills, competence and, most importantly, dedication on the part of the entire facilities staff. The people in my group are problem-solvers, and every one of them does an amazing job of keeping our research and vivarium infrastructure clean, attractive, secure, operational, efficient and environmentally responsible."

“The people in my group are problem-solvers, and every one of them does an amazing job.”

Fitzpatrick has applied his considerable expertise to every sort of physical plant problem-solving imaginable. Along the way, he's garnered the trust, respect and considerable esteem of the Laboratory's Senior Management Team and others who benefit constantly from his can-do, mission-accomplished work style.

"Fitz's casual style of dress and his easygoing demeanor hide a razor-sharp focus on serving his customers and delivering value for the Laboratory," says Fitzpatrick's boss, Charles E. Hewett, Ph.D., the Laboratory's executive vice president and chief operating officer. "Under his leadership, Facilities and Engineering delivers all projects ahead of schedule and under budget."

The people in my group are problem-solvers, and every one of them does an amazing job.

Among "Fitz's" finest-hour engineering successes, Hewett says, are the state-of-the-art Functional Genomics and East Research facilities in Bar Harbor, the Laboratory's Sacramento, CA campus, and the Jackson Laboratory for Genomic Medicine research center that was dedicated in October 2014.

"We've received more energy conservation awards than I can count, won National Park Service recognition for night-sky-friendly lighting, and our grounds look better than ever," Hewett says. "Who would think that such a frumpy-looking guy could deliver all of that? But he does, and more."

Fitzpatrick chuckles at the descriptor "frumpy." He's been called "lumpy" and more than once "grumpy," he says, but never "frumpy." Fitz says he admires Hewett's management style.

"Chuck is awesome to work for," Fitz says. "He lays out the problem, tells us what he needs as an end result, and leaves it to us to go solve it. We consider everybody in the Facilities group to be a problem-solver, from the engineers to the maintenance staff to the functional services folks to the security staff. We are a service organization. We solve problems."

His team’s biggest challenge to date was the planning and construction of the Laboratory’s new $135 million JAX Genomic Medicine research center in Farmington, Conn. “It was a pretty challenging schedule,” Fitzpatrick says, especially during a time when his seven-member engineering and technical services staff was also managing more than $20 million in construction projects at JAX’s Sacramento, Calif., facility and another $15 million at the Bar Harbor campus.

“Nobody on the JAX team had ever designed or constructed a genomics facility before,” he confesses. “That was a little challenging, but both our internal Facilities Engineering team and our external designers developed a very flexible and functional facility.”

As the deadline approached for having an occupancy permit in hand in September 2014, Fitz promised, “We’re going to be done on time, on budget—all the things we said we’d do when we signed our agreement with the State of Connecticut.” As it turned out, he was right on both counts.

Another accomplishment under Fitz’s belt was the relocation to Sacramento of the Lab’s California facility that first opened in nearby West Sacramento in 2001. The alchemy required to convert an existing warehouse into a high-tech laboratory began in earnest in late 2007 after the building's original design was scaled back to accommodate budget constraints.

"We pulled off the California project under budget and on deadline, emphasis on 'we.' It was very much a team effort, and in some cases even a family effort that involved relocating Norm Burdzel (and his family) to Sacramento to serve as The Jackson Laboratory's on-site project manager for nearly a year," he says. "We were expected to open up the first Monday in 2009, and we opened the doors at 8 a.m. January 5, 2009. The construction budget we were working under was $38.1 million, and we came in at $37.5 million. That was $600,000 The Jackson Laboratory could spend on something else that it badly needed."

Successful completion of the project within a 13-month window was dubbed "The Miracle on Raley Boulevard" by some of those involved in the breakneck pace of the work. "It really was a miracle to a certain extent," Fitz says. "When we got out there in

earnest in November of 2007, we had to gut the interiors to a shell, we hadn't been permitted and design documents were approximately 50 percent complete, so to turn all that around in really under 12 months by the time the final construction contract was signed and executed was quite an accomplishment.

"Doing construction in California is entirely different than executing work in Bar Harbor," Fitz says. "One big difference that had to be overcome was the permitting process. It was just painful. It is what it is, but this was a variable that we were not prepared for going into the project and we didn't account for the delays during the original scheduling exercise. If it wasn't for the great relationship Chuck Hewett and others cultivated with the economic development staff in Sacramento, we probably wouldn't have opened for business until March or April. They streamlined our permitting process and pulled a lot of strings with city government. We were promising Sacramento 100 jobs, and that was important to them back then, as it is now."

One operational area that consumes much of Fitz's time and talents is energy conservation. While conservation efforts have been successful, energy costs are variable from year to year and the bottom line tends to keep going up due to expansion of facilities in Bar Harbor, Sacramento and Farmington.

"We monitor market price for power and fuel, and solicit bids from electrical service and fuel oil providers when the market is favorable, and we've been able to keep our costs flat through market timing," he says. "Electricity in Maine is primarily driven by natural gas prices. When gas prices were below $5 per million BTUs, we locked electricity rates for 18 months at a very reasonable rate. When we can, we strike and hit."

The Laboratory received a $1 million grant partially funded through the Regional Greenhouse Gas Initiative, an East Coast greenhouse cap-and-trade program, to help pay for an energy-efficient heating conversion. Under the guidance of Fitz's team, the Laboratory is now offsetting most of its fuel oil consumption with a high-tech biomass boiler that generates steam by burning wood pellets, a byproduct of Maine's most plentiful renewable resource, trees.

"With the price of wood products today and the federal grant, there are some pretty significant savings," he says. “And it represents huge savings environmentally: 13.5 thousand tons of CO2 a year that we will be removing from our emissions profile."