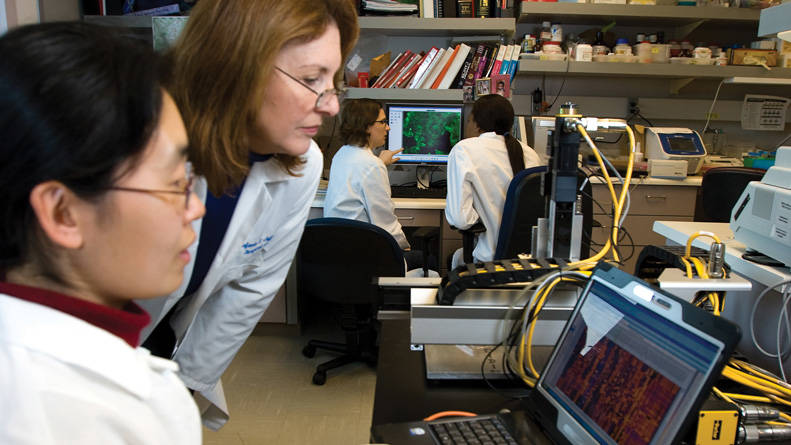 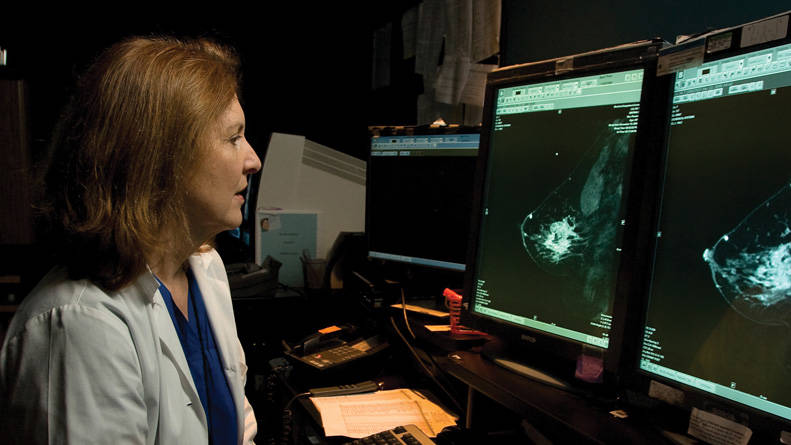 Stefanie Stein's fascination with the biomolecular complexities of life took root as a young girl.

"When I was about seven, I used to catch tadpoles and take them home to dissect and look at them under a microscope," she recalls. "I've always been a very curious person."

Decades later, Stefanie Stein is now Stefanie Stein Jeffrey, M.D., a cancer surgeon, breast cancer researcher and inventor at the Stanford University School of Medicine. She's also an active supporter of The Jackson Laboratory, donating her royalties from a recent invention to student research programs at the Laboratory. It was at the Laboratory's Summer Student Program for high school and college students that she first encountered basic science research that led to her lifelong fascination with biomedical science and her career as a cancer surgeon and researcher.

"I was a junior in high school, and it changed my life," she says. "I was always a math-science person, but I had never been exposed to real scientists doing real research. I learned about the molecular aspects of science, which back then wasn't a part of a high school science curriculum. It showed me how scientists think and what kinds of questions they ask. Just doing it hands-on was really interesting, as was having the stimulation of peers, and learning about the projects that my other friends at the Laboratory were doing. One of the most important things I learned was that science can be a lot of fun. Not only is it rigorous and interesting, but it's fun!"

The body is a miracle. And there's a great sense of wonder when you're actually inside, seeing what's going on.

Some of that fun came at her expense. "I wish I had a picture of when I tripped, going down a stairway while carrying a tray of fertilized eggs for one of my experiments," she recalls with a laugh. "I ended up sitting amidst a mess of smashed egg yolks and whites, and all my friends walked by saying 'I'll have mine scrambled' or 'Sunnyside up, please.' The experiment was ruined, but it was quite funny."

That summer also brought her face to face with her mentor, Dr. Margaret Green, the wife of Laboratory Director Earl Green and a prominent scientist in her own right. "Seeing a totally dedicated woman scientist was wonderful," Stein says.

After high school, Stefanie Stein headed to Harvard University, where she majored in chemistry and physics. "But I was still very interested in biology," she says, "and during the evenings, weekends and summers while at Harvard I did research in protein synthesis and later glucose metabolism. I ultimately decided that I wanted to do something in science that would help people, which led me to medical school at UCSF [the University of California, San Francisco]. At that time, women comprised only about 20 to 25 percent of most medical school classes, and, having been one of very few women in Harvard physics classes, I wanted to go to a medical school with more women; at UCSF, women made up 40 percent of the class."

After graduating at the top of her medical class, she remained at UCSF for a general surgery residency, a perfect match for someone good with her hands.

"In high school, I was a state sewing champion," she says. "My next door neighbor, who was a home economics teacher, had one of those old, black, pedal Singer sewing machines. She taught me to sew in eighth grade."

That early love of working with her hands persisted through medical school and influenced her to become a surgeon. "So now, rather than sewing clothes, I'm sewing on people. It's a source of immediate satisfaction, because when somebody has a problem, you can cut it out. It's very concrete. Someone comes to you with cancer, and you take the cancer out. It's also really something of an honor to be inside someone's body. It's pretty amazing. The body is a miracle. And there's a great sense of wonder when you're actually inside, seeing what's going on."

Earlier in her career, Jeffrey spent most of her time in the operating room or taking care of patients. Now she spends the majority of time doing research. After specializing in breast cancer surgery, she now realizes that insights she is gleaning through breast cancer research may eventually prove to be more curative than hands-on surgery.

"What's nice about breast cancer is that you cure most of your patients surgically," she says. "But to cure patients who are not cured by surgery, a therapy needs to impact the biology of the disease. After spending 25 years of treating patients with a scalpel, on a one-by-one basis, I now hope to discover knowledge that could affect thousands of women in the future.

"Breast cancer, like other solid tissue cancers, is a very heterogeneous disease, and the molecular aspects of it are very, very interesting. I was very fortunate to be at Stanford University, which was ground zero for pioneering the development and use of DNA microarrays to analyze gene expression in breast cancer. Instead of studying one or two genes, we were simultaneously measuring the expression of tens of thousands of genes. By analyzing tumors globally, we were able to classify breast cancers into different molecular subtypes that are now internationally acknowledged and used for drug testing and treatment. It was an honor to be a key member of the original Stanford/Norway team that accomplished this work."

Microarray analysis of cells in primary tumors evolved into the development of a biodevice known as MagSweeper, recently licensed for commercialization by Stanford University. Jeffrey saw the level of heterogeneity among cells in the original cancer, but asked which specific cells spread to other parts of the body to cause metastases. It is those cells that require further therapy. Most cancer therapy kills rapidly multiplying cells. However, treatments that target specific aspects of a cell's biology are proving more effective and potentially less toxic. Determining which cells require targeting thus becomes essential.

"People had been counting circulating tumor cells, which are tumor cells found in the blood of cancer patients and appear to be involved in the spread of cancer throughout the body," she says. "Counting had been correlated with response to therapy and patient prognosis. But I was more interested in characterizing these cells. I had used three different commercially available devices to try to characterize these cells. I wasn't able to, so I decided to go out and invent my own."

To accomplish this, she led a team of scientists from Stanford's Genome Technology Center and the School of Engineering. The team met weekly for two years and tested a variety of

configurations, resulting in an automated device that captures purified tumor cells from blood for single cell genomic analyses. The original prototype was built with funds donated by one of Jeffrey's patients. She and other cancer researchers are now using the MagSweeper to capture and analyze up to 96 genes that are expressed by circulating cancer tumor cells on a cell-by-cell basis. That information is helping Jeffrey and other clinicians customize treatments and identify cancer patients who are more likely to benefit from a particular cancer drug.

"There are hundreds of drugs in the pipeline, but it's extraordinarily expensive to run clinical trials on each drug," she says. "If a drug is shown to help only 5 to 10 percent of people with a certain kind of cancer, that drug might be thrown out, even though it might be really beneficial for that 5 to 10 percent. The Holy Grail is developing diagnostics that will identify who those people are, instead of throwing the drug away and trying something else. In developing this aspect of personalized medicine, you want to find the most effective and least toxic drug that helps one patient although it may not help another. Identifying the types of cells involved will help guide therapy, but there's a lot of molecular biology left to do on these cells." Jeffrey is also funded to test novel drug therapies and uses Jackson Laboratory mice in her research.

A long-time financial supporter of The Jackson Laboratory, Jeffrey has irrevocably earmarked all royalties she earns from the device as continuous financial support for the Summer Student Program.

"I wanted to give back to the Laboratory, and 'pass it forward' as they say, so that other students could have the same opportunity I had at The Jackson Laboratory, which had such a great impact on my life," she says. "I'm hoping that maybe this will stimulate scientists of the future."