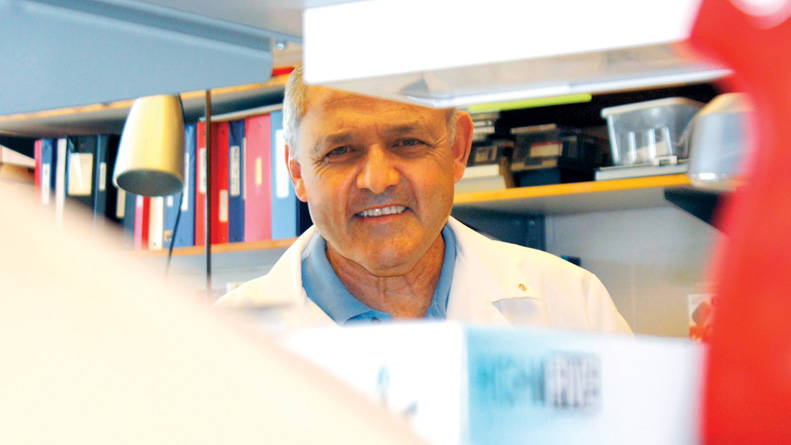 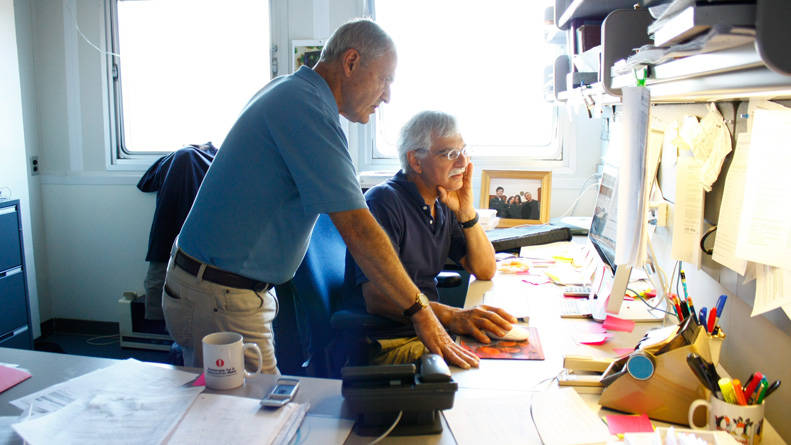 It's a good thing that the fishing in rural Maryland is lousy, at least compared to the great fishing throughout Downeast Maine.

"I applied for two postdoctoral positions, one at the National Cancer Institute in Bethesda, Md., where I was offered a position, and one here at The Jackson Laboratory," says Professor Leonard Shultz, Ph.D., whose active and ongoing career as a researcher at The Jackson Laboratory began in 1972. "My Ph.D. work in microbiology focused on a bacterial factor in rabbit platelets, and I soon realized that the work I wanted to do in immunology would require continued research with genetically defined lab animals, and the animal model of choice was the laboratory mouse. It didn't take long to find out that The Jackson Laboratory was the pre-eminent, world-class research facility to acquire knowledge about the mouse as a model of human disease."

A day of interviews in Bar Harbor left young "Lenny" Shultz with a second postdoctoral job offer. Why did he choose the remote Jackson Laboratory over the prestigious National Cancer Institute? "Everything else being equal, what made the big difference is that the fishing was better here," he says with a laugh. "When I was at UMass, working on my Ph.D., I was awarded the state prize for the largest landlocked salmon and now have the pin hanging on my office wall."

Over his 40-plus years at The Jackson Laboratory, Shultz studied a group of spontaneous mutations that cause perturbations in blood cell production and the immune system. The focus of these studies has been to increase the understanding of the development and regulation of the immune system in normal and disease states. He has also applied this knowledge to develop novel strains of immunodeficient mice that support engraftment with human blood cells. That work has earned Shultz an international reputation for his innovations in developing what are known as "humanized" laboratory mice.

Of the more than 7,500 strains of mice maintained at The Jackson Laboratory, there's one strain that is consistently in great demand. Formally known to researchers worldwide as "NOD.Cg-PrkdcscidIl2rgtm1Wjl/SzJ (005557)," it's a mouse model best known within The Jackson Laboratory as the "5557 mouse," or, even more commonly, "Lenny's mouse."

This growing JAX® Mice inventory of humanized mice is enabling biomedical researchers at The Jackson Laboratory and in countless research centers worldwide to circumvent a basic biological conundrum: Many potentially fatal human blood infections are caused by organisms that do not infect mice or other laboratory animals. The solution? Create a lab mouse with human blood.

The genetic engineering challenge confronting Shultz, his in-house research colleagues and his global collaborators was breeding a mouse model with an immune system that was not so robust that it would reject human tissues or cells and not so weak that it offered the mouse insufficient protection from infection with normal bacterial flora and premature death. After engrafting human blood stem cells into the bone marrow of a "Lenny mouse," the mouse's bone marrow developed a unique blood cell population that includes up to 50 percent human white blood cells as well as some human red blood cells and platelets.

"This mouse serves as a bridge between in vitro studies with human cells and human clinical trials," he says. "These mice are the bridge that connects laboratory mouse research and human research into infectious diseases such as HIV, malaria, ebola and dengue fever. This humanized mouse provides insights into living human biology that aren't otherwise possible. Up until this mouse was created, the use of humanized mice as a model for human immunity was limited by their relatively short life span and by their innate immunity, which limited the ability to introduce human tissue, blood cells and stem cells. With both low immunity and a relatively long life span, this strain enables the determination of long-term drug efficacy, as well as safety."

Shultz and his research teams have spent the last 25 years improving immunodeficient mouse models that serve as hosts for engraftments of normal as well as malignant human cells. "It's been a long road in developing this mouse, and we are not at the end of the road," he says. "We have 40 or 50 genetic crosses going on, which will be useful in studying a number of human diseases, including diabetes, muscular dystrophy and amyotrophic lateral sclerosis. The diabetes models enable in vivo testing of human pancreatic beta cell populations derived from early stem cells. There are dozens more models coming up."

Thinking back on his earliest days at The Jackson Laboratory, Shultz recalls the importance and the influence of the atmosphere of mentoring that surrounded him while at work. As a newly minted postdoc, he was rubbing elbows—then, as he does now—with Nobel-caliber scientists, all eager to share their insights with Shultz and other young faculty and staff. In hindsight, his mentors—Don Bailey, Margaret Green, George Snell, Priscilla "Skippy" Lane, Doug Coleman—are prominent among the Who's Who of The Jackson Laboratory's 80-year history. Over the years, Shultz has earned his own reputation as a mentor who is always eager to stoke the passions that bring young scientists to Bar Harbor. He has mentored predoctoral, postdoctoral, college and high school students, many of whom have since established themselves as successful scientists.

"I do some mentoring, but probably not as much as I should," he says. "I do a lot of mentoring for students in other labs. I get e-mails all the time that say 'How do you do this?' and a lot of them are from students, and you just talk them through it."

Melissa Cox’s résumé now includes having spent the past two years as a postdoc in the Shultz lab after earning her doctorate in genetics at Texas A&M University. In recounting her work at The Jackson Laboratory, she can't seem to find enough superlatives to describe time she spent working under Shultz's tutelage.

"Lenny is extremely kind and very good at working with people who have different levels of understanding of the work he's doing," says Cox. "He collaborates with the top people around the world, yet he shows the same respect to the postdocs and other students who pass through his lab. He loves to laugh and joke, and he never stops thinking in terms of developing new ideas for research and collaboration."

Cox remembers Shultz keeping a close eye on her research and serving as a source of ceaseless encouragement. "He used to come over to my bench and say, 'Is it Eureka! yet?' He is so smart and well-respected all over the world, and at the same time he's so personable. Lenny is amazing."

Shultz is approaching 70 but doesn't see retirement as an option. He remains in great demand as a collaborator on new humanized mouse models and as a speaker at seminars and conferences worldwide. Shultz recently joined Nobel Laureate and Jackson Laboratory alum and trustee David Baltimore in addressing the Second International Workshop on Humanized Mice in Amsterdam. Meanwhile, his research programs have now generated over 300 peer-reviewed publications, and he is as busy as he's ever been, engineering new mouse models that are critical to ongoing research in human immunology, diabetes, infectious diseases, cancer and regenerative medicine.

"When folks retire, there is all that talent that is bored and has a lot of time," he says. "As more and more people are using our models, you'll find me in my lab for some time to come. I'll keep doing it for as long as it's fun. Besides, you can't fish around here, really, 12 months out of the year."