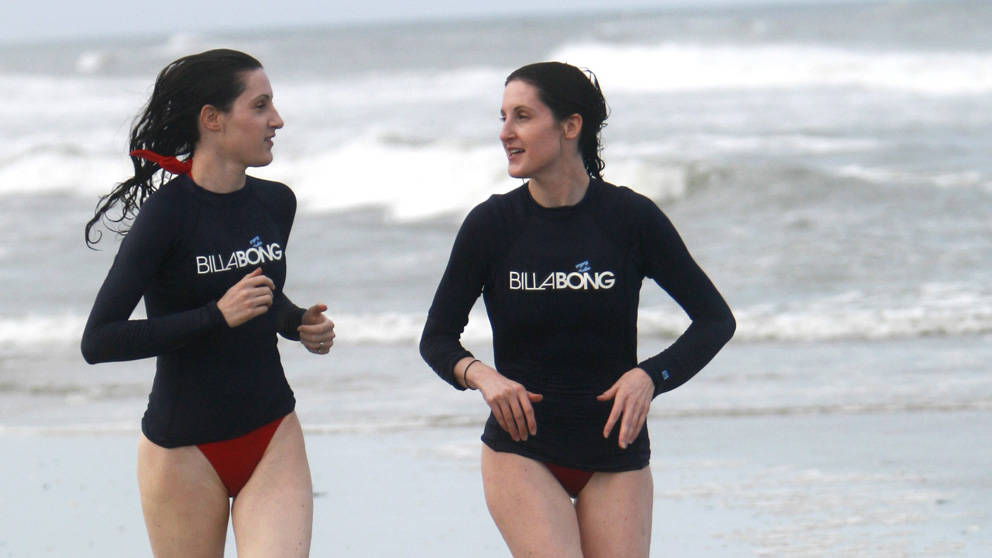 When college coeds Anne and Erin Spillane arrived in Bar Harbor, Maine, for The Jackson Laboratory's Summer Student Program in 2001, their excitement was tempered by pangs of intimidation.

Their assigned mentor, faculty member John Sundberg, D.V.M., Ph.D., was a principal investigator with decades of experience who took his science seriously. His lab was studying genetic skin diseases in mice as models for human diseases.

The Spillane sisters, rising juniors at Cornell University that summer, had little knowledge of skin and no particular interest in it. Anne was looking into oncology, and Erin was considering neurobiology.

But under the methodical tutelage of Sundberg and his lab staff, Dawna Boggess and Kathleen Silva, the identical twins soon grew comfortable in their own skin research.

"John was very patient with us and would sit down at a microscope and go through the five layers of skin with us," recalls Anne.

"He had thousands of pathology slides," adds Erin.

Anne did phenotyping research and Erin gene-mapping research, both on a mutant mouse model for chronic proliferative dermatitis, an inflammatory skin disease. Their summer culminated with papers on their research and formal presentations to their peers, parents and Jackson faculty.

"They did a great job in their presentation," says Sundberg, who remembers the twins as "hard working and very focused—two of the best summer students I ever had. I pushed them very hard, but they seemed to go with the flow."

More than a decade after their summer in Bar Harbor, the Spillane sisters, now in their early 30s, could probably teach their Jackson mentors a thing or two about the treatment of skin diseases. After graduating from Cornell, they both went on to medical school at the University of Maryland and then served residencies in dermatology with the U.S. Army.

"I think John would be stunned to learn we know where the epidermis is," Erin says with a chuckle.

It was Anne who discovered the Summer Student Program when she saw a brochure for it posted on a wall at Cornell. The prospect of living in Highseas, the Laboratory's seaside mansion next to Acadia National Park, with 30 of their peers and doing bonafide biomedical research with seasoned scientists—all while getting a stipend —was too great an opportunity to let pass.

Their father, Tim, remembers his daughters plotting, "If you want to go to med school, that Jackson internship is the one you want."

"That's a great institution," he says. "It was good for the girls to see how serious people are about research."

Recalls Anne: "It was a very formative time of our lives. What a wonderful place to have ended up. It was fantastic, and looking back I couldn't be more grateful for the opportunities that The Jackson Laboratory gave us."

"We really enjoyed our time with the lab that we got placed with," Erin says. "We got to learn a lot about how research works. I didn't know a lot about that."

Careers in research or medicine weren't the twins' original goals when they were growing up on a 5-acre farm in Glenmoore, Pa., an hour's drive northwest of Philadelphia. When their mother, Donna, brought home a pony one day on a whim, the girls soon thought they had found their calling as equestrians.

They rode horses competitively through their teens and received Olympic-caliber training. Anne rode with a dressage team that won a U.S. Pony Clubs national championship, and Erin rode on a show jumping team that was national runner up.

The girls, who awoke daily at 5 a.m. to feed the animals and muck their stalls, were so passionate about horses, they were certain they would train them professionally one day.

A sobering event suddenly reined in those plans. One of Erin's riding coaches, a young man who had devoted his life to competitive riding, was killed in a riding accident. "It had a huge impact on her because she saw a lot of herself in him," says Donna. "It was devastating for her."

The tragedy impressed on both girls how dangerous and difficult the riding lifestyle was. Having one of their prized horses go permanently lame and another one euthanized only magnified that reality.

Disheartened, they turned their attention to college and were accepted at Cornell, where their interest in science and medicine—and that chance encounter with a brochure—led them to The Jackson Laboratory and new career ambitions.

"We didn't leave the Laboratory saying we want to be a dermatologist," Anne recalls, but their Jackson experience, along with other influences, did push the sisters toward clinical medicine. "Dr. Sundberg taught us a lot," Anne says. "Sometimes knowledge begets interest."

It wasn't until after they had finished their clinical rotations in medical school that Anne and Erin decided on dermatology. "It's one of the best fields out there," Erin says. "It has a huge potential to make a difference in people's lives."

That's particularly true for Army doctors. Anne, who was stationed at Brooke Army Medical Center in San Antonio, treated many soldiers with severe burns and wounds suffered in Iraq and Afghanistan. At Walter Reed Army Medical Center in Bethesda, Md., Erin saw a lot of exotic tropical diseases that are difficult to diagnose.

After completing their residencies in 2011, the twins owed the Army at least four years of service for paying their way through medical school. When their Army duty is over, they want to establish a private dermatology practice together in a small town as close as possible to their parents and sister, Caitlin, 25, and have children and horses.

"Our family is very close," Anne says, "so to be together is very important."

She and Erin credit their parents for much of their success in science and medicine.

"We're fortunate in that we came from a good home," Erin says. "Our parents want us to be happy. They always impressed on us the importance of education."

"I think we're very lucky in that our parents set us up for a successful life," says Anne.

The sisters remember their parents going out of their way to enrich their learning. When Tim, who owns a specialty roofing company, shattered his ankle in a fall on the job, he made sure his orthopedist spent some time with the girls, showing them his surgical tools and explaining his methods. He also arranged for one of his roofing clients, a heart specialist, to allow the girls to observe one of his surgeries. And at dinner, the family had a ritual of discussing the girls' assigned reading of the front section of The Philadelphia Inquirer.

"We encouraged the girls to look at the world through a creative, expansive lens," Tim explains.

He and Donna believe the special bond of being identical twins and best friends also catalyzed their daughters' success.

"That really is a gift from God to have a soul mate from birth that you can be completely open with and have no pretense," says Donna.

"We've always appreciated it as a great thing in their lives," says Tim. "What a gift to have someone so close to you to push you on."