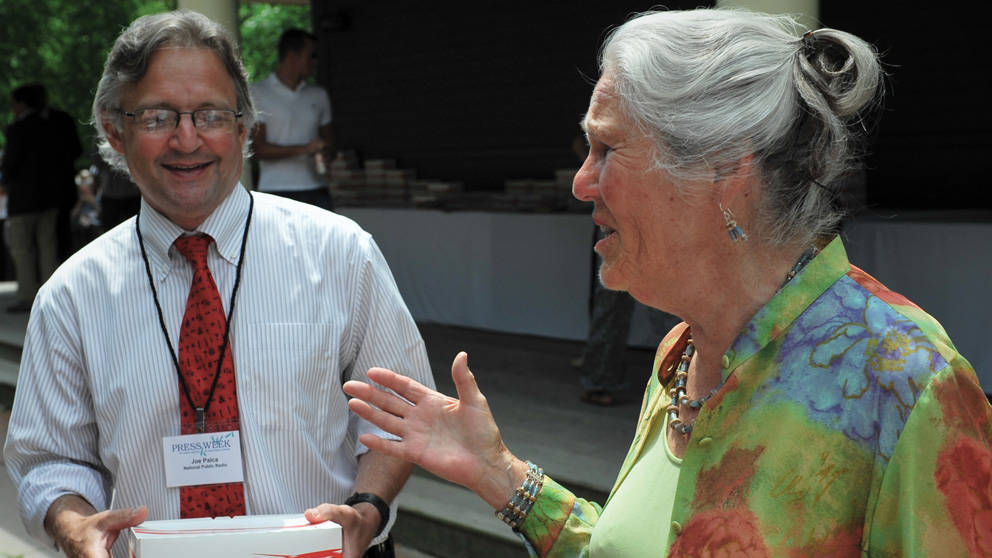 Veteran journalist Joe Palca, Ph.D., translates science news for more than 23 million listeners of National Public Radio and also serves as the back-up host for NPR's Talk of the Nation Science Friday. The Search caught up with Palca when he came to Bar Harbor to moderate two panel discussions at a day-long Symposium on Biomedical Science and Medicine in the Next 50 Years.

Q: How did you first learn about The Jackson Laboratory?

A: It was 19 years ago, as a young—or at least younger—reporter for Science magazine, that I heard talks here that I still think about today, from geneticists talking about mitochondrial DNA and imprinting and epigenetics. These were fascinating insights into a world I didn't know much about at the time, insights that are still relevant, 19 years later. It was a great entry for me.

Q: As a science reporter, do you bring some element of skepticism to the stories you develop as you try to answer the question "So what?"

A: Skepticism is important. These actual things we call "breakthroughs," which is a word we never use, are totally, totally rare. If you get penicillin, and suddenly people are walking around who would otherwise be dead from a bacterial infection, I'll give you that one. But, after that, it gets pretty hard.

I'm sure that there are times when I've made it seem like it's all tied up in a neat little package. Inevitably, in every case that I can think of where I did a story that seemed to explain something, there's probably been some further advance that either made it more subtle or more complicated or more difficult than I made it sound. I could start every story: "A minor advance occurred today in science." That's the truth, right? They're all little steps, but they're all interesting. There is always going to be something new to be discovered.

Q: Why should people, specifically, your radio audience on NPR, be interested in basic science research like what's being done at The Jackson Laboratory?

A: I think there are two reasons. One is that understanding biological organisms is like understanding the universe—it's cool. What could be more interesting than that? Why wouldn't you want to know what makes things work? The other thing is maybe, just maybe, one of these things will actually take us in a direction that will revolutionize medical therapy. That would be great. I'm not totally confident, but who knows?

Q: Given that science is so dynamic, where answers beget new questions, do you ever find it frustrating to be reporting on questions for which there are no known answers?

A: We're not going to know the answers to most of the questions that I've reported on. I could go back through my entire reporting career and probably say that nothing that I've ever reported on is definitive. Once you accept that, then everything is interesting. You could walk through The Jackson Laboratory and tell 800 interesting stories, including things that you didn't even know were interesting. Who would have known that there's a mouse, called Sharkey, that has extra teeth? What does that mean? Wouldn't it be interesting to know what that's all about? I would love to know how that happens. Everything is interesting. It's just a question of finding the interesting people with the interesting story and then getting it on the air.

Q: Of the hundreds of stories you've researched and reported on, what's the one story that stands out?

A: The one I liked the best was the story in 2005 or 2006 about when they first looked at the human genome and said there were 3 billion base pairs, and that only one percent is important and the rest is junk. I did this story that said well, maybe three or four percent is important and the rest is junk. That was a story that said: Don't be so smart; there's stuff that appears to be junk, but maybe it's important. Now we're up to three percent.… I'm hoping I can live long enough to say 'Well, now it's up to 12 percent, or 18 percent or 25 percent, or maybe it's all interesting.' What you don't know is what's really interesting, and things are happening at a pace that's hard to fathom.