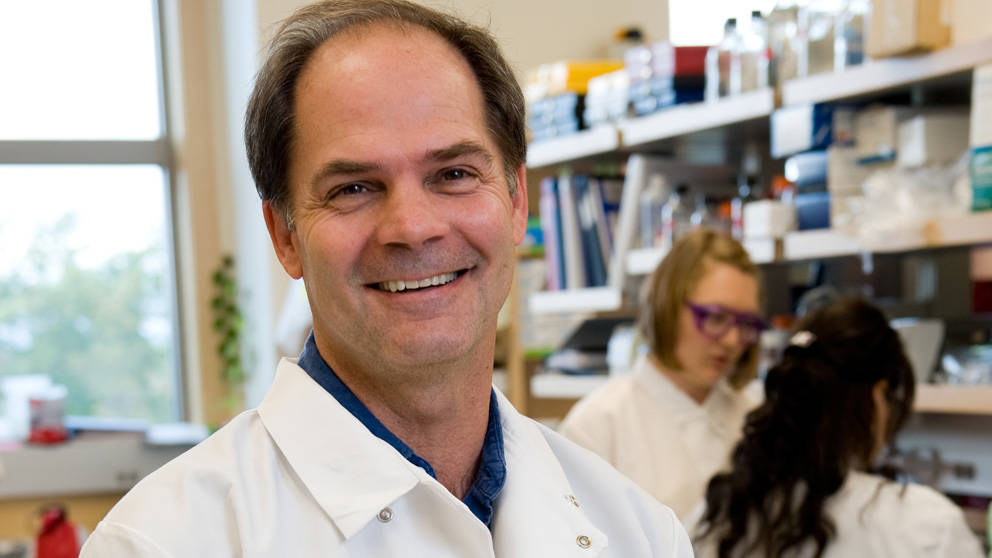 As an undergraduate at the University of Colorado- Boulder in the 1970s, Robert Braun spent two summers driving a tractor trailer rig for a national moving company. He was so adept in the job that the company offered him his own truck when he graduated.

"I had never really seen the country," Braun recalls, "so I thought it would be a good thing to do."

For the next two years he “hauled bedbugs” full-time, crisscrossing all 48 continental United States and Canada. The pay and the scenery were good, but the long, lonesome highway seemed headed toward a dead end. The recombinant DNA revolution was opening wide new vistas in science at the time, and he was intrigued by the view. His mind drifted back to his favorite course as an undergraduate student: molecular genetics.

"I decided that's what I wanted to do."

So one day he parked his 18-wheeler at the University of California-Santa Barbara library and went inside to look up graduate programs in molecular genetics. He made a U-turn for science that day and never looked back. He applied to several programs and accepted an offer from the Tufts University School of Medicine in Boston, where he eventually earned a Ph.D. He spent most of the next 21 years conducting research in reproductive biology and teaching at the University of Washington School of Medicine, achieving a full professorship in the Department of Genome Sciences in 2006.

If you were in severe difficulty, he's the person you'd want with you. He is absolutely totally dependable, and I have never ever seen him flustered.

And then The Jackson Laboratory called in 2007. The organization was expanding its research program and needed an accomplished scientist to lead it as associate director and chair for research. The Laboratory and its location, Bar Harbor, had left a favorable impression on Braun when he spent a sabbatical at the Laboratory in 2001. "The Jackson Laboratory is a world-class institution," he says. "A colleague whom I respect told me this is the most important job in the mouse genetics world. I knew what a great place it was to work and what a great place it was to live."

He was offered the position and accepted it. In the fall of 2007 he moved to Bar Harbor with his wife, Madeleine, and their infant son, Caden. "This is an opportunity that really only comes around once in a lifetime," he says. "It was a chance to sign up for an adventure that could enrich our lives."

Braun is responsible for leading the Laboratory's research staff of almost 500 scientists and technicians. A coming wave of retirements and a planned expansion of the faculty are allowing him to help reshape much of the Laboratory’s research talent. A parallel challenge is to retain and mentor the new recruits as well as the faculty and staff already at the Laboratory.

“The leadership style I want to have is one based on trust, respect, transparency and consensus,” Braun says. “That's my style. I am a listener. I believe everyone has something to contribute."

In addition to leading the research staff, he oversees his own lab. The team is using mice to elucidate the genetic network that regulates self renewal of the male germline stem cell, to study the mechanism of temporal protein synthesis during germ cell differentiation, and to determine the role of testosterone in the formation of sperm cells.

"The big picture for my lab is trying to understand the genetic basis for infertility in men," Braun says. "Another part is how to develop a male contraceptive. We need solutions beyond a condom. A pill is the long-term goal."

Dr. Andrew Wright, professor emeritus of molecular biology and microbiology at Tufts University, mentored Braun during his graduate studies there. He says his former student has exceptional people skills for leading the Jackson research staff and his own research lab.

"He's extremely genuine and very encouraging to others," Wright says. "That's a fantastic thing to have when you're head of something like (research at) The Jackson Laboratory. People need encouragement. Beneath Braun's gregarious exterior - "he's got thousands of jokes; he's a great raconteur," Wright says - is an intensely competitive man with strong resolve.

"He doesn't let things stand in his way. He's got a lot of purpose in his life. He demands high standards of people. He wants to push people to do the best they can do."

"He's pretty driven," agrees Braun's wife, Madeleine, who also has a Ph.D. and has held various scientific-management roles at the Laboratory since arriving with her husband. "He focuses on a problem to the point of getting it done. He's very creative and is a natural leader. He's also really optimistic."

Though he relishes his lofty new perch atop the world of mouse genetics research at the Laboratory, Braun never aspired to it.

"I'm not about climbing ladders," he says. "I'm about pursuing my passion, being honest with myself, and pursuing every day for what it's worth. My goals have always been to do the very best science I can and to enjoy myself, and then see what happens."

Something he does climb is rocks. Big ones.

"His climbing portfolio is deep", says his sister, Patty Braun, a pediatrician in Denver. "He has climbed all over the world and has done those 'big' climbs like The Nose on El Capitan. He has taught me how to climb and has the ability to push me to my limit yet keep me safe."

Braun has made more than 15 climbing trips to California's Yosemite National Park, home of El Capitan. Locally, he climbs in Acadia National Park at the Precipice, Great Head and Otter Cliffs, often with fellow faculty members and climbers Simon John and Gary Churchill.

"Climbing requires a lot of concentration, and for some people it's highly stressful," Braun says. "The fact that it's so intense forces me to take my mind off of science. It rejuvenates me like nothing else."

Wright, also a fellow climber, marvels at his coolness under pressure.

“If you were in severe difficulty, he's the person you'd want with you. He is absolutely totally dependable, and I have never ever seen him flustered.”

"He and I have been under situations from tranquil to very stressful," Wright says. "If you were in severe difficulty, he's the person you'd want with you. He is absolutely totally dependable, and I have never ever seen him flustered."

Don Wendland, another long-time friend and climbing partner, recalls a tense moment on El Capitan when a haul bag containing 100 pounds of gear became snagged on an overhang 50 feet down. "I was being the typical Don - impatient and excitable," Wendland says. "The trailing Braun freed the bag and popped up on the other side of his partner with a quip to break the tension. He said, 'P is for patience, Don.'"

"From a young age, he did things with more vigor than most," says Patty Braun. "He rode his tiny dirt bike down Pike's Peak with a buddy, started climbing in the Garden of the Gods while in high school, and was a competitive hockey player throughout his youth."

"Despite all of that enthusiasm for thrill, he already was taking science seriously. I remember him winning the regional science fair with some experiment that involved blood. I don't remember his specific aims or hypotheses, just that there was blood in our spare fridge downstairs."

Bob Braun is the middle child of seven. Their father was a barber with an eighth-grade education who fought in the Army in World War II from D-Day to V-Day. Their mother was a waitress and homemaker.

The Brauns instilled in their children a strong work ethic and drive to succeed. "Our parents never had to tell us to study," Braun recalls. "We saw how hard they worked for us. It was obvious to us that education would help us a lot." His siblings include two physicians, a physics professor, an engineering consultant and a cattle rancher.

"They're a very unusual family - highly accomplished," says Wright. "My wife says she gets intimidated by the whole Braun family because they're good at everything. They always had a feeling of responsibility for people, and I think the whole family is committed to doing good deeds."

Says Wendland: "There's a profound level of service deep in Bob's soul. To be in a position of leadership where he can influence the direction of research is profoundly challenging and fulfilling to him."