The null Nnt allele in C57BL/6J (B6/J) does not affect its responsiveness to diet-induced obesity (DIO). Find out why.

If you research diabetes and/or obesity you may be wondering if the null mutation of the NAD nucleotide transhydrogenase (Nnt) gene (Toye et al. 2005; Freeman et al. 2006) in JAX® Mice strain C57BL/6J (B6/J, 000664) affects its responsiveness to diet-induced obesity (DIO). The answer is "No." JAX scientist Dr. Edward Leiter recently compared the Nnt allele's effects on DIO responsiveness in Nnt-mutant B6/J males to C57BL6/NJ males (B6/NJ, 005304), which have the wild-type Nnt allele (unpublished research, The Jackson Laboratory) (Leiter 2008).

Cohorts of 40 six-week-old males from both substrains were fed a semi-defined diet containing 60% of its calories as fat (Research Diets D12492) for 14 weeks. The initial mean body weight (BW) of both cohorts did not differ, but, during the 14 weeks, the B6/J males significantly outgained the B6/NJ males, and, at the end of the study, weighed an average of 4g more than the B6/NJ males. Dual emission X-ray absorptiometry (DEXA) showed that this difference was due to a significantly higher lean and fat mass in B6/J males (Table 1). Mean non-fasting plasma glucose (PG) levels were also significantly higher in the B6/J males (sampled in eight, 12, 16, and 20-week-old mice).

Glucose tolerance became progressively more impaired in both substrains, but was significantly more severe in the B6/J substrain. Mean plasma insulin (PI) levels in 20-week-old mice were modestly (but not significantly) higher in B6/NJ males, consistent with their less severe IGT response (Table 1). Consistent with the greater adiposity of B6/J mice, mean plasma leptin (PL) levels were modestly higher in 20-week-old B6/J males and significantly higher in these males over time than in B6/NJ males (Table 1).

In summary, Dr. Leiter’s study revealed that B6/J males had a significantly more robust DIO response (higher weight gain, more adiposity, and more severe IGT) than B6/NJ males. Homozygosity for the Nnt mutation did not diminish male B6/J responsiveness to a 60% kcal fat diet. We cannot conclude that the mutant B6/J Nnt allele is the factor responsible for the more robust DIO response because certain strains that are even more DIO-responsive than B6/J, such as NON/ShiLtJ (002423), are Nnt wild-type (JAX® NOTES 2006). Likewise, strains such as A/J (000646), which are DIO-resistant (Surwit et al. 1988), are also Nnt wild-type (Freeman et al. 2006 supplemental material). As in humans, glucose homeostasis in these inbred strains is controlled by multiple genes. 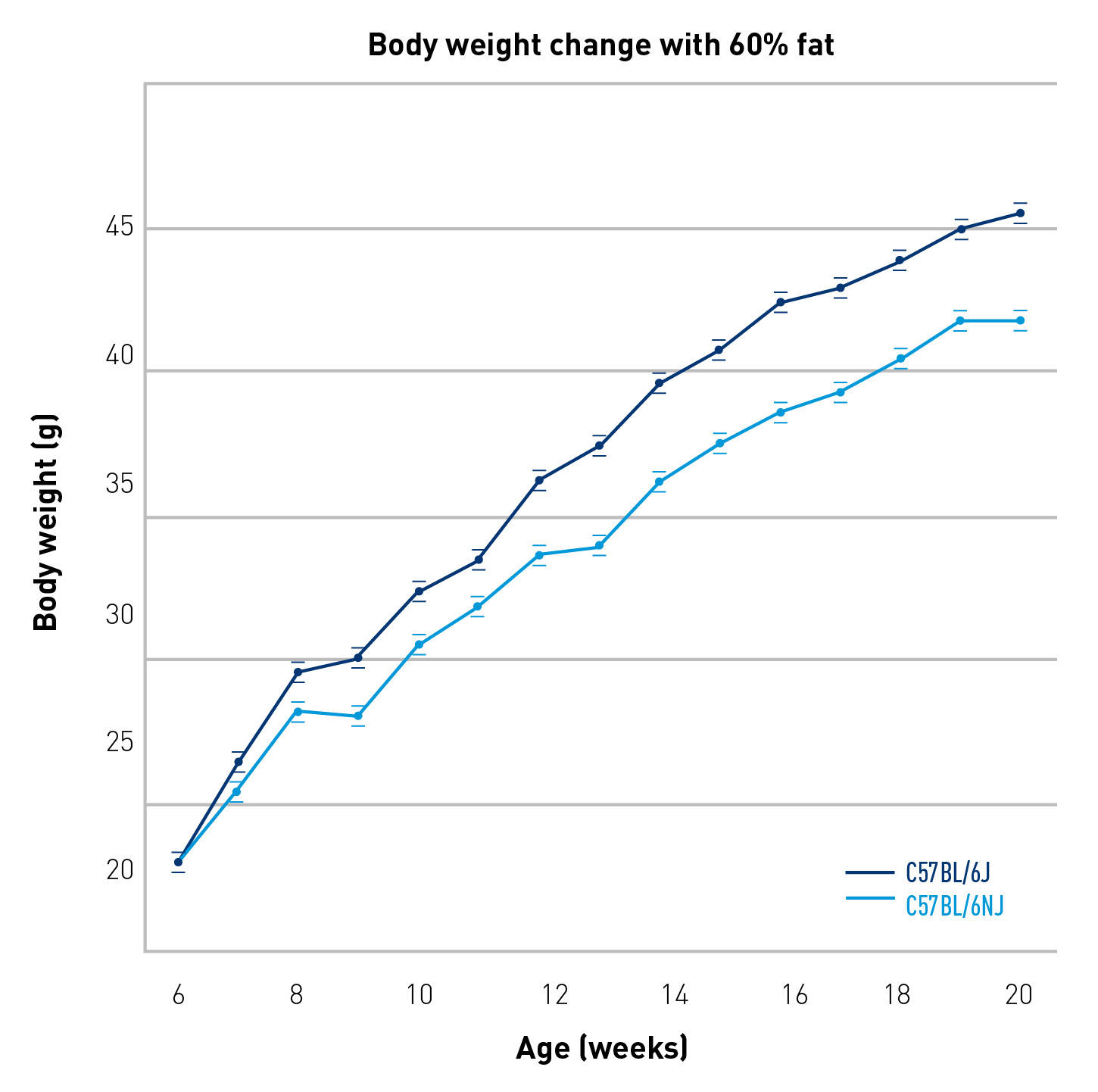