TALLYHO! Most people associate this word with the cry used in the British Isles to excite and prompt fox hunting hounds to chase after their quarry. At JAX, however, TALLYHO has an entirely different meaning. It’s the name of a relatively new polygenic model of moderate obesity and male-limited spontaneous type 2 diabetes (Kim et al. 2001). Unlike popular obesity/diabetes models, such as B6.V-Lepob/J ("ob/ob," 000632) and BKS.Cg-m +/+ Leprdb/J ("db/db," 000642) mice, which have defects in leptin or its receptor, the TALLYHO mice have normal leptin and leptin receptor genes, resulting in much less extreme metabolic syndrome and diabesity phenotypes.

Several JAX scientists have recently added to our knowledge about the TALLYHO mouse: Dr. Adam Kennedy, study director, In Vivo Core Studies, California, recently compared the response to Rosiglitazone, a drug widely used to treat type 2 diabetes, between TALLYHO and db/db males. Dr. Yun Wang, D.V.M., Ph.D., and her colleagues have elucidated some of the molecular mechanisms responsible for the reduced glucose uptake in TALLYHO mice and have tested the involvement of a candidate gene for Tanidd1, a mouse chromosome 19 QTL associated with diabetes in TALLYHO mice. Their results will soon be published (Wang, pers. comm.) These and previous studies indicate that the TALLYHO strain is emerging as a potentially more appropriate model for identifying the molecular defects underlying type 2 diabetes. The most current information about the diabetes and obesity phenotypes of this important type 2 diabetes model is summarized below.

The TALLYHO/JngJ (TH) mouse strain (005314) was developed by Professor Jürgen Naggert’s research group at The Jackson Laboratory by using a backcross/intercross strategy and selecting for male hyperglycemia (Kim et al. 2001). Genome-wide SNP analyses indicate that TH is a Swiss-derived strain, related to ST/bJ (000688), SJL/J (000686), FVB/NJ (001800) and NON/ShiLtJ (002423). Most studies have compared the TH strain to the unrelated C57BL/6 (B6) strain.

*Severity of diabetes and obesity influenced by fat and carbohydrate content of the diet.

Vascular dysfunctions in the aorta of TALLYHO mice are associated with enhanced contribution of prostaglandin H2/thromboxane A2 receptor and cytochrome p450, likely CYP2C6 and 2C9 (Cheng et al. 2007). Similar anomalies in cerebral arterioles and carotid arteries are possibly due to oxidative stress and enhanced activity of Rho kinase (Didion et al. 2007).

We are very excited about the potential of the TALLYHO mouse in biomedical research. Both its unique diabetes and obesity phenotypes indicate that it will offer novel insights into the pathology and treatment of obesity and type 2 diabetes.

Figure 1. TH males responded only to high doses (30.0 mg/dl) of Rosiglitazone administered by gavage. Non-responsiveness to lower doses may be partly due to TH males weighing less and receiving less Rosiglitazone than db/db males. 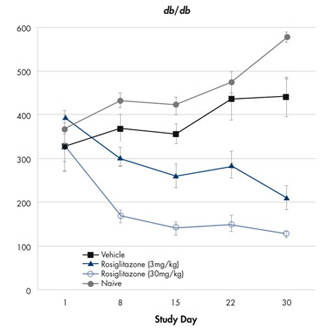 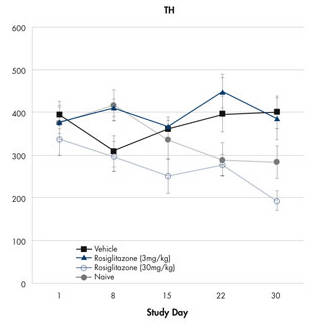 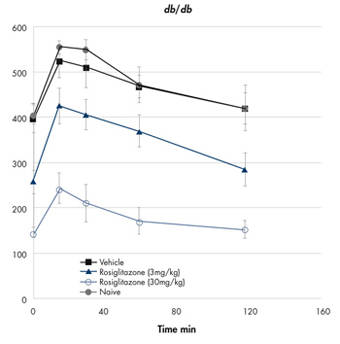 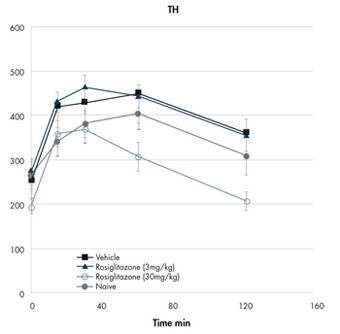