NON/ShiLtJ males: a new model of diet-induced obesity and diabesity

Mouse models are extremely useful for researching obesity, diabetes, dyslipidemia and hypertension - the constellation of phenotypes associated with metabolic syndrome (Fong 2004; Isomaa et al. 2001). NON/ShiLtJ (NON, 002423) mice (the name is derived from "Non-Obese Non-diabetic"), as the name suggests, generally do not become obese when fed a normal 6% fat diet and contain a diabetes resistant MHC haplotype (H2nb1 = Kb, Anb1, Ek, Db). However, they clearly harbor genes predisposing them to type 2 diabetes, as evidenced by early impaired glucose tolerance in males and females. In 2006, a study completed at The Jackson Laboratory, revealed that NON males fed a high-fat diet become obese and diabetic (chronically elevated non-fasting plasma glucose levels greater than 250mg/dl) and are a new model for researching diet-induced obesity (DIO) and obesity-induced diabetes (diabesity).

The study, led by Edward Leiter, Ph.D., and Stephen Linnell, compared the body weights, adiposity, multiple blood analytes, non-fasting plasma glucose levels and histology of relevant tissues in two groups of 10 NON males. In the first group, 4-week old males were fed a chow diet containing 10-11% fat by weight (TestDiet® 5K20) until they were 24 weeks old. In the second group, 4-week old males were fed the same diet for one week and then switched to a diet containing 24% fat by weight (Research Diets, Inc. D12451) until they were 24 weeks old. All mice were weighed weekly, their non-fasting plasma glucose levels measured (every four weeks for mice fed the high-fat diet; weeks 20 and 24 for mice fed the low-fat diet), and their body composition (bone and adipose tissue) determined by PIXImus DEXA (Dual Energy X-ray Absorptiometry). When the mice were 24 weeks old, samples of their blood and urine were collected; levels of several of their blood analytes (including plasma hormones and adipokines) determined; their pancreas, livers, and kidneys removed for histological analysis; and their brown adipose, inguinal, retroperitoneal and gonadal fat tissues removed and weighed. 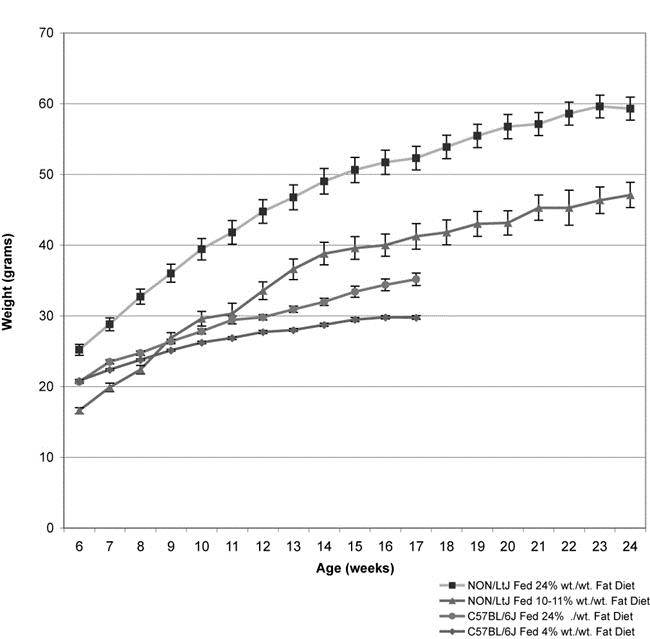 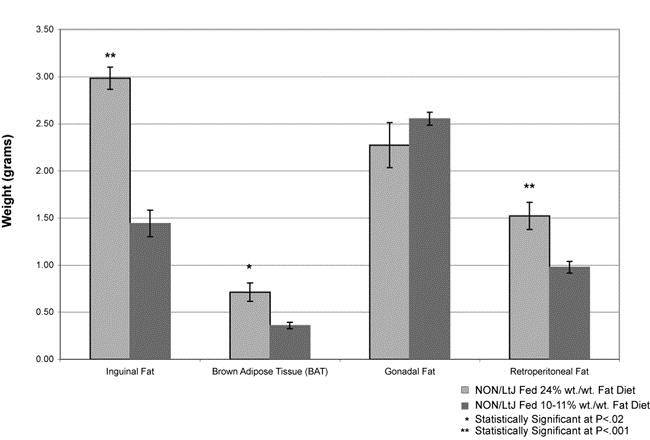 Figure 2. Comparison of mean (± s.e.m) weights of various fat deposits between NON males fed the 24% diet and those fed the 10-11% fat diet. 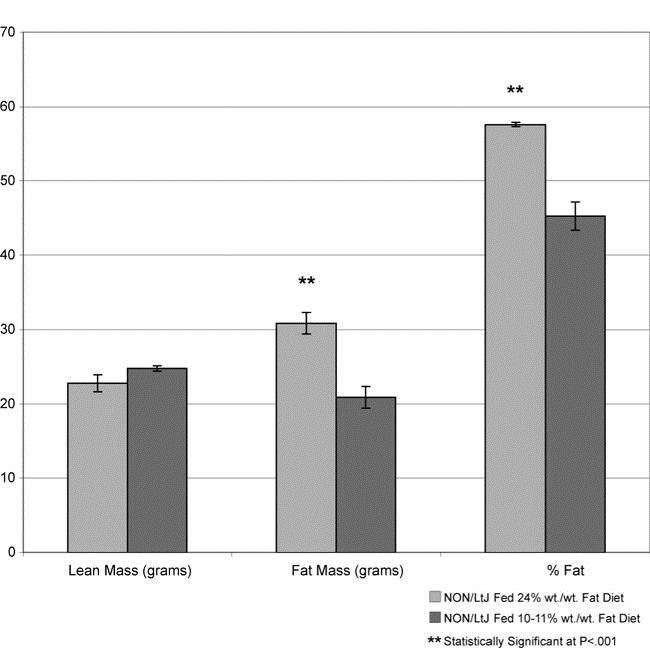 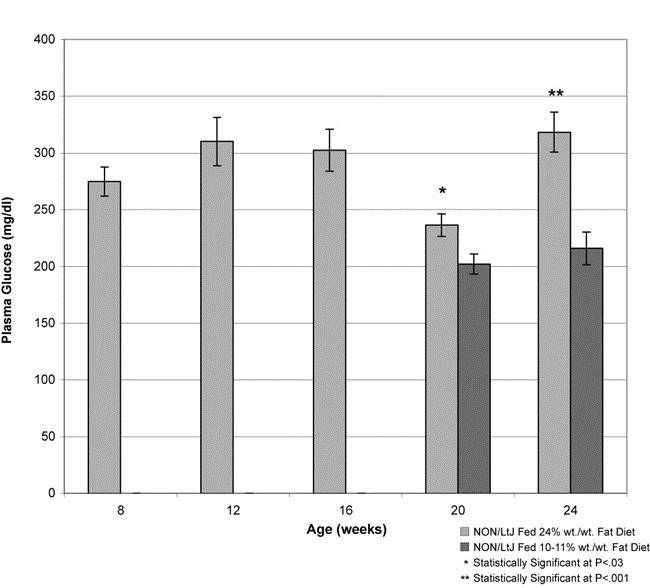 By 24 weeks of age, NON males fed the 24% fat diet had approximately twice as much plasma insulin, leptin, and resistin as did those fed the 10-11% fat diet (t-test, P<0.001). In contrast, both groups of mice had comparable levels of adiponectin. Levels of PAI-1 (known as SERPINE1 in the mouse), a biomarker for hepatosteatosis, were nearly four times greater in mice fed the 24% fat diet (t-test, P<0.001; Table 1). 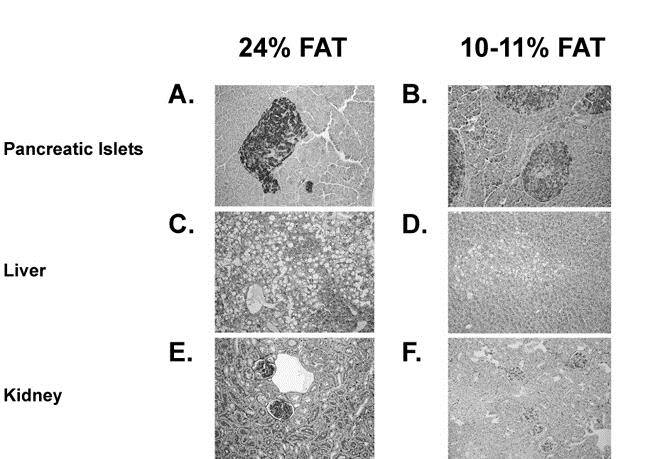 Figure 5. Histological comparison of pancreatic islets (A), liver (C), and kidney (E) tissue from 24-week old NON males fed the 24% fat diet and the same tissues (B, D, F respectively) from those fed the 10-11% fat diet).

Our Breeding Services makes managing your mouse colonies easy and affordable. We'll make sure you get the mice you need when you need them.