Common human diabesity syndromes are polygenic, not monogenic, and the clinical phenotypes of the monogenic models are extreme: massive obesity and hyperphagia, either extremely high or no leptin in circulation, and extreme hyperinsulinism. In contrast, NONcNZO10/LtJ has moderate behavioral and endocrine phenotypes, and males exhibit a maturity-onset transition from impaired glucose tolerance to a stable non-fasting hyperglycemia.1,2 To develop hyperglycemia, this model must attain specified body weight thresholds during peripuberty and afterwards.

Knowing the chromosomal locations of some of these diabesity QTL from both parental strains6 permitted development of NONcNZO10 by two cycles of backcrossing the NZO QTL into the NON genetic background followed by inbreeding with selection for the diabesity-promoting QTL.1,2 The diabesity phenotype conferred by this QTL combination very well models the more common human diabesity syndromes: moderate obesity without hyperphagia and reproductive failure, and only moderately elevated insulin and leptin concentrations in plasma.2

The NONcNZO10/LtJ strain has been under development in JAX® Services since November 2004. Originally, we distributed males when they were about eight weeks old and had been weaned onto an NIH-31 diet containing 6% fat (LabDiet® 5K52). All previously published phenotypes and histopathology of the diabesity syndrome spontaneously developed by NONcNZO10 males are based on this 6% diet.1,2,7,8 However, some customers reported that NONcNZO10/LtJ males weaned onto this diet did not become hyperglycemic (chronically elevated non-fasting glucose level of ≥250 mg/dl plasma) by the time they were 12 to 20 weeks old. So that males would exceed the weight thresholds necessary to force penetrance of hyperglycemia, we weaned them onto an NIH-31 diet containing 10-11% fat (LabDiet® 5K20). These males weighed more than those fed the 6% fat diet at each sampling point, weighing an average 6.5 grams more at the 20 week sampling point (Fig. 1). Over 90% of them were hyperglycemic by the time they were eight weeks old (Fig. 2). Histopathology of pancreas, livers, and kidneys from 22-week old males fed the 10-11% diet was similar to that reported for diabetic 24-week old males fed the 6% diet.2

Upon customer request, we will still distribute NONcNZO10/LtJ males weaned onto a 6% diet, but based on our experiences, we cannot guarantee how many of them will become hyperglycemic. Our standard procedure is to distribute males weaned onto a 10-11% fat diet. Customers wanting these mice to develop hyperglycemia in their facilities should continue to feed them the 10-11% diet. 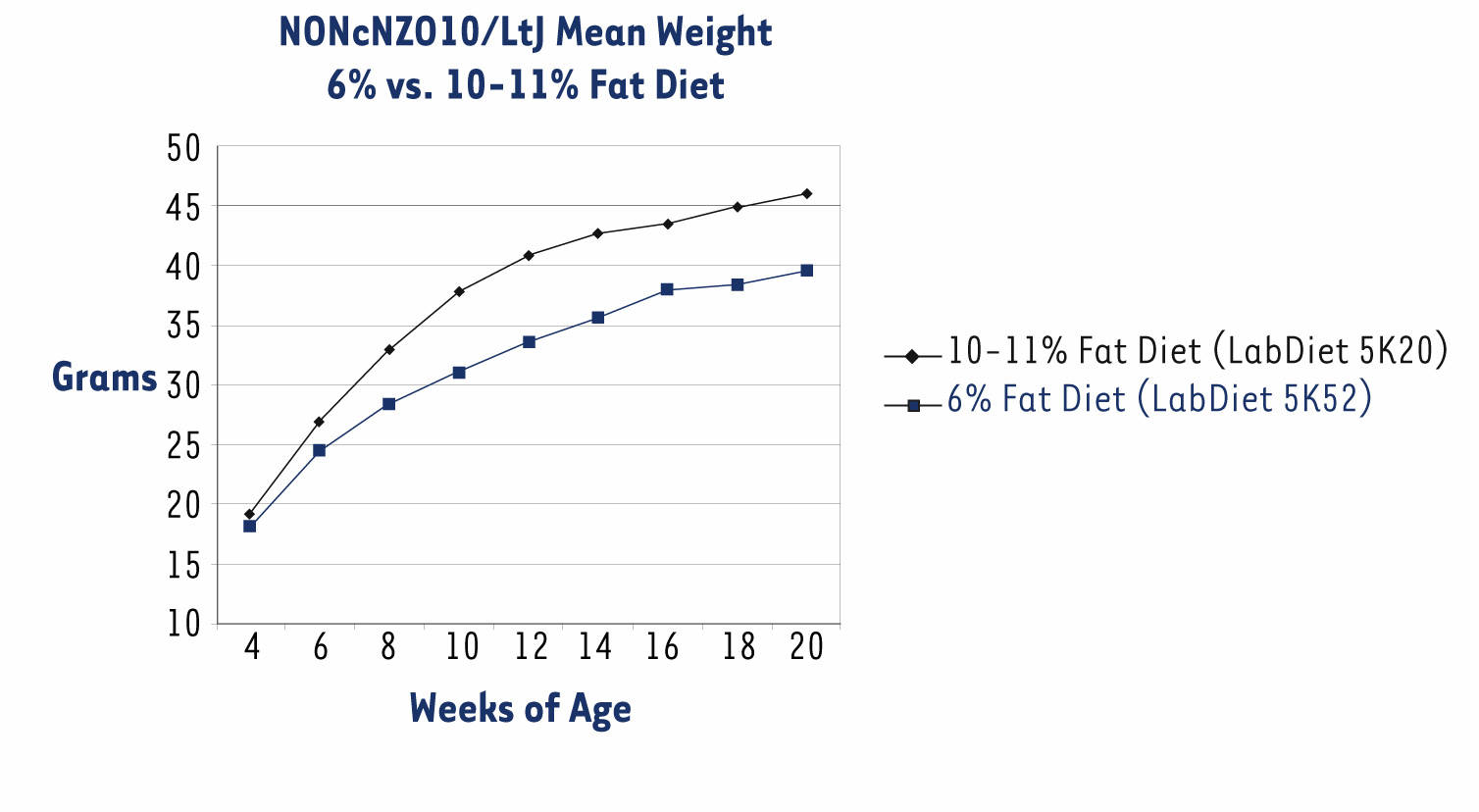 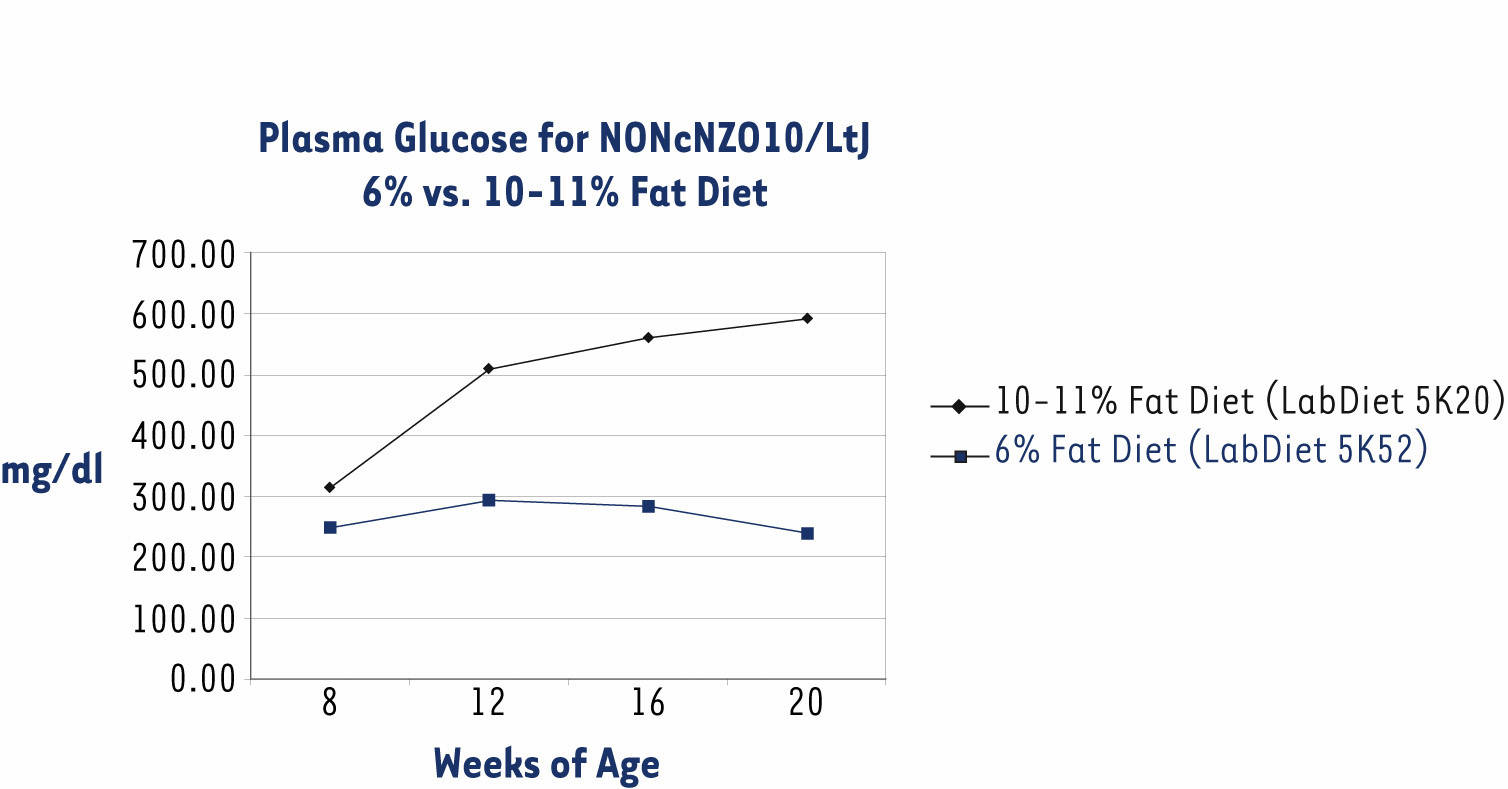 Figure 2. Non-fasting plasma glucose concentrations levels of NONcNZO10/LtJ males fed a 10-11% fat diet were significantly higher than those fed a 6% diet when both groups were over eight weeks old (P < 0.0001; ANOVA with Least Squares Means contrast). Data show mean -/+ SEM for the same group of males shown in Fig. 1.

Because NONcNZO10/LtJ females weaned onto a 6% fat diet are normoglycemic, they can be compared to age-matched hyperglycemic males to evaluate the effects of chronic diabetes on specific phenotypes. However, NONcNZO10/LtJ females have yet to be tested for hyperglycemia when weaned onto a 10-11% fat diet. Initial results indicate that they are able to bring early rises in plasma glucose back into the normoglycemic range as they age.

NONcNZO5/LtJ (Stock Number 004455) males are excellent controls for comparative gene expression studies designed to identify new drug targets: NONcNZO5/LtJ contains diabesity-protective QTL at chromosomal positions where NONcNZO10/LtJ contains diabesity-susceptible QTL, and each have comparable body weights and visceral adiposity.2 Whereas glucose tolerance of NONcNZO5/LtJ males (like that of the parental NON males) is impaired, that of NONcNZO5/LtJ females is normal. In our studies, no NONcNZO5/LtJ males (0/31) fed a 6% fat diet became hyperglycemic; slightly over 10% (1/9) fed a 10-11% fat diet developed chronic hyperglycemia, but not until they were 20 weeks old.9 Because the 10-11% fat diet may combine with impaired glucose tolerance to disrupt glucose homeostasis, a higher frequency of males may develop chronic diabesity when fed the 20% fat diets typically used in diet-induced obesity studies.

In some cases, NZO, one of the parental strains used to develop NONcNZO10/LtJ, may be a good control. Penetrance of diabesity in males is variable, usually not exceeding 50%. Although they have peripheral leptin resistance, NZO mice have central leptin sensitivity, suggesting a defect in leptin transport across the blood-brain barrier.4,5 Males develop hypertension on a diet containing 20% fat.10

NZL/LtJ (Stock Number 005067), a recombinant congenic variant of NZO now available from The Jackson Laboratory, may be a good control for some studies. Although it has the same diabesity features as does NZO, it reproduces better than does NZO.11

Because most of the genetic background of NONcNZO10/LtJ is derived from NON, a Swiss-derived inbred strain, other Swiss-derived inbred JAX® Mice may be considered for metabolic controls. For example, SWR/J (Stock Number 000689) is resistant to diet-induced obesity12 and does not exhibit impaired glucose tolerance,13 as do NON males and the closely-related ALS/LtJ strain (Stock Number 003072). Indeed, the ALS/Lt strain may be of interest to investigators because males are excellent models for an insulin-resistant metabolic syndrome that responds to treatment with anti-oxidants.14

We have a considerable number of new models of diabesity and metabolic syndrome. For more information, contact micetech@jax.org.

13 Leiter EH, Coleman DL, Hummel KP. 1981. The influence of genetic background on the expression of mutations at the diabetes locus in the mouse. III. Effect of H-2 haplotype and sex. Diabetes 30:1029-34.