Thanks to the work of Drs. Loretta Mayer and Patricia Hoyer at the University of Arizona College of Medicine, since the early 2000s, scientists finally have a model that accurately simulates human menopause. The model may help reveal the genetic and physiological dynamics that make menopausal women susceptible to age-related, chronic and cumulative illnesses such as heart disease, diabetes, various types of cancer, osteoporosis, and stroke. It may also shed some light on how hormone-replacement therapy (taking estrogen and progesterone supplements) affects the risks of developing these diseases while alleviating menopausal discomforts.

Finding an appropriate model for human menopause has been difficult for several reasons. Non-human primates experience human-like menopause, but menopause studies in such long-lived mammals are unfeasible. Alternatively, though rodents live for just a few years, and their ovaries are depleted as they age, they neither menstruate nor experience human-like menopause. As a partial solution, researchers developed the ovariectomized (OVX) rodent model. However, OVX rodents do not satisfactorily simulate human menopause because they begin menopause too quickly, skip perimenopause (the one- to 10-year period of irregular menstrual cycles when women experience most of their discomforts), and don't mimic the hormonal cycling of perimenopausal women.

The new model is more realistic. Mayer and Hoyer discovered that the industrial chemical 4-vinylcyclohexene diepoxide (VCD) selectively kills the small primordial and primary ovarian follicles of mice and rats without affecting other tissues. They found that approximately 58 days post ip injection with 160mg VCD/Kg body weight for 15 days, B6C3F1/J mice (Stock Number 100010) begin persistent acyclic diestrus, the equivalent of human menopause. Furthermore, 127 days after the 15-day VCD injection protocol, the endocrine state of these mice mimics that of ovary-intact post-menopausal women (Fig. 1). Their levels of plasma estrogen are non-detectable, and those of follicle stimulating hormone (FSH) are 10 times higher than those in controls (estrogen normally serves as a negative feedback for the production of FSH).

Figure 1. Cyclicity, estrogen levels, and FSH levels are similar in VCD-induced mouse and human menopausal women. The OVX mouse begins menopause quickly and skips peri-menopause, typically one to 10 years before human menstrual cycles cease (post-menopause refers to the year after peri-menopause). Values for VCD-induced menopause are relative to the beginning of the 15-day VCD injection protocol.

Mayer and her colleagues suggest that circulating androgen produced in the ovaries of the VCD mice (an impossible feat in OVX mice) receiving 17beta-estradiol is aromatized to estrogen in the artery walls and, along with the 17beta-estradiol supplements, helps protect the mice against atherosclerosis. As in mice, the ovaries of menopausal women also produce androgen, which may, along with estrogen supplements, be anti-atherogenic. However, in the absence of estrogen, androgen is produced in excess and may make women more susceptible to atherosclerosis.4 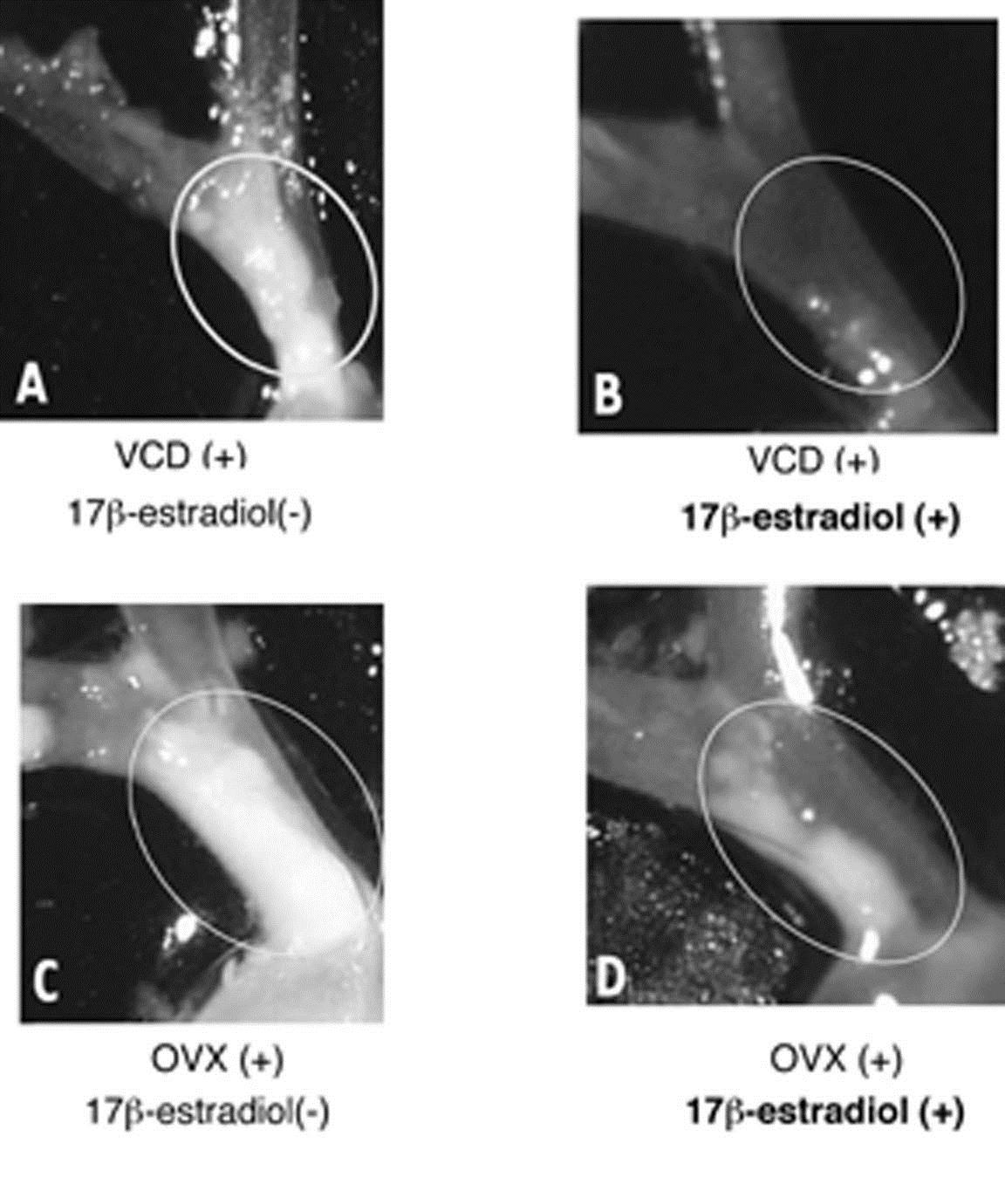 In the last 20 years, the effects of hormone-replacement therapy on the risks of heart attacks, various cancers and other diseases has been intensively and extensively researched. The bulk of the research began in the late 1970s, involved nearly 165,000 women, and was essentially composed of four major efforts: the Nurses' Health Study, the Postmenopausal Estrogen/Progestin Interventions Trial, the Heart and Estrogen-Progestin Replacement Study, and the Women's Health Initiative. So far results generally reveal that though menopausal women who take estrogen and progesterone supplements decrease their risk for osteoporosis and colorectal cancer, they increase their risk for heart disease, stroke, total blood clots and breast cancer.5

Evidence presented at the 2004 meeting of the North American Menopause Society strongly supports the hypothesis that long-term hormone replacement therapy in older women is more likely to increase the risk of heart disease than does short-term therapy in younger women.6 The influence of hormone-replacement therapy on ovarian cancer risk is inconclusive.5