Tyzzer's disease is caused by the obligate intracellular bacterium called Clostridium piliforme (formerly Bacillus piliformis). The microbe was discovered and characterized in 1917 by Ernest Edward Tyzzer, a professor at Harvard Medical School and an authority on avian coccidia. He recovered C. piliforme from Japanese waltzing mice (Mus bactrianus) and published his findings in a comprehensive 37-page article1. Tyzzer provided a very thorough characterization of the agent, including clinical aspects of the disease, epidemiology, pathology and reproduction of disease after experimental inoculation by several routes or exposure to soiled bedding. Bedding that was held for over one year remained infectious for mice.

The host range of C. piliforme is broad and includes all laboratory rodents and rabbits, several wild rodents, domestic animals and several exotic non-rodent hosts. Much of our knowledge about host range is derived from case reports. One common theme is that the animals involved were frequently very young (puppies, kittens, calves, foals) or were immunosuppressed by virtue of another, often viral, infection2-5.

The target organs in animal infections are the intestine (distal ileum, cecum and proximal colon), the liver and, less often, the heart1. Enteric lesions can be severe, often with demonstration of bacilli in epithelial cells and smooth muscle cells of the muscularis mucosa and tunica muscularis interna and externa. The most frequently encountered lesion in all species of affected animals is focal hepatic necrosis. Since the first description of Tyzzer's disease in 1917, there has been only a single case report documenting a C. piliforme infection of a human being6. As was true of the animal case reports, the individual was severely immunosuppressed due to an intercurrent viral infection; however, the single human infection presented as skin lesions rather than the internal lesions described for other species.

The organism causing Tyzzer's disease is unusual. It is intracellular, pleomorphic, spore-forming and motile. Although gram stains indicate that C. piliforme is gram-negative, the organism falls into a category of agents that are "extremely oxygen-sensitive (eos)" and can be shown to be gram-positive only if fixation and staining are done under anaerobic conditions7,8. C. piliforme stains weakly with hematoxylin and eosin, so confirmation is frequently made using silver impregnation or Giemsa stains. The vegetative form, readily visible microscopically, is large and ranges from 8-40 mm in length. The organism does not grow in cell-free medium but does replicate in yolk sacs of embryonic eggs and in certain cell cultures. Vaccine-challenge studies have supported the hypothesis that C. piliforme isolates are morphologically identical but antigenically distinct9,10.

Transmission of C. piliforme occurs primarily by ingestion of spores in contaminated feces. The vegetative form is labile and is not thought to play a significant role in natural transmission. The spores, however, may remain infectious for years.

The severity of disease in laboratory animals varies from subclinical to acute disease with high mortality. Gerbils are particularly susceptible to some, but not all, C. piliforme derived from a variety of hosts. Among mice, strains that are defective in IgM production, such as CBA/N and C3.CBA/N mice, congenic for Btkxid, are reported to be quite susceptible11. Tyzzer's disease was thought to be restricted to mice until 1965 when Allen and co-workers reported disease in laboratory rabbits12. In research facilities, clinical Tyzzer's disease is most often seen in rabbits, gerbils, hamsters and guinea pigs12-16. Infections of mice and rats are most often subclinical17.

The diagnosis of Tyzzer's disease most frequently hinges on light microscopic observation and/or serologic detection. Seroconversion relies on active replication of viable organisms present within body tissues. Gross liver lesions are not always present. Immunosuppression of suspect colonies, in attempts to induce clinical disease, has met with variable success. And gerbils, although very susceptible to many C. piliforme isolates, are not universally susceptible.

Possible sources of C. piliforme include bedding, feed and water. Antibiotic treatment simply drives the organism "underground," reducing obvious clinical disease. Decontamination is difficult because of the spore-forming nature of the bacterium; however, spore inactivation can be achieved by autoclaving supplies and/or by the use of gamma irradiation or ethylene oxide. Treatment with 0.3% sodium hypochlorite or 2% peracetic acid for 5 minutes also inactivates the spores18. C. piliforme spores are resistant to ethanol, phenolic germicidal detergents and quaternary ammonium compounds and show a graded response to formaldehyde based on contact time18. 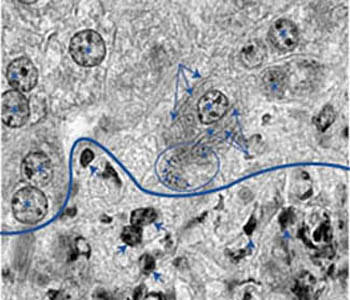 Figure 1. Numerous filamentous Clostridium piliforme bacteria are present in the cytoplasm of a hepatocyte adjacent to the perimeter of a focus of liver necrosis. Long arrows point to some of the many longitudinal profiles while arrows point to some of the cross-sectional profiles present in the blue circled area. Asterisks designate nuclei of infected and non-infected hepatocytes. Cells below the blue line are necrotic, as evidenced by shrunken and pyknotic nuclei. Some of these are depicted with short arrows. (Magnification 1000X)

A team of JAX scientists led by Tanmoy Bhattacharyya, Ph.D. and Natalie Powers, Ph.D. found that…