The making of the 'Live Linkage Map' 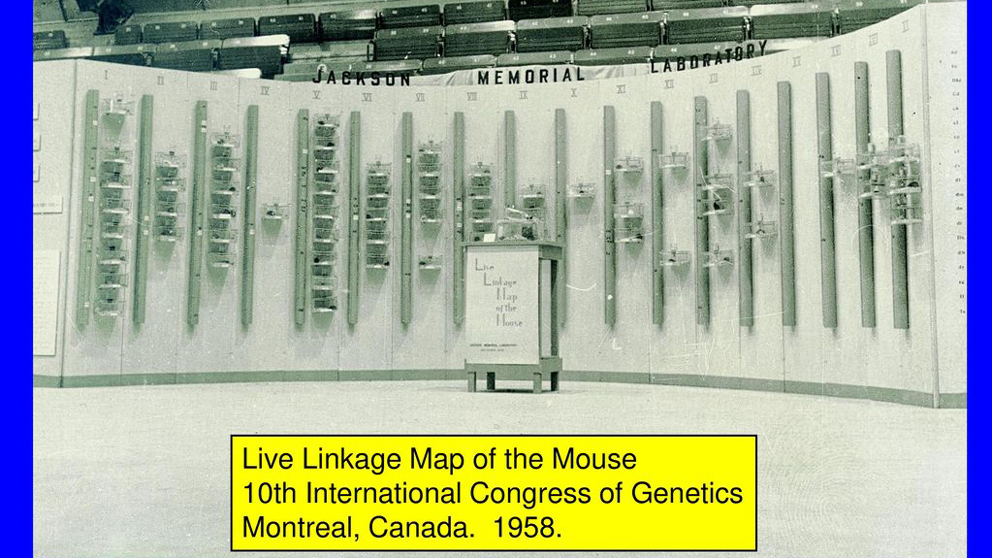 The International Genetics Congress was to be held in Montreal in the late summer of 1958.

It was decided the Roscoe B. Jackson Memorial Laboratory would exhibit a live linkage map of the mouse with mutant mice—in boxes, of course—at the correct position on a large-scale background of the lines representing linkage groups.

"It was a big operation," Margaret Green recalled. The exhibit background was designed by audio-visual head George McKay in consultation with [JAX Director Earl] Green and built under his supervision. In addition, a few mice had to be imported from other laboratories, although almost all of the 60 "genes" were available at the Laboratory.

The completed exhibit with the mice in their plastic boxes was given a dress rehearsal for the Laboratory's annual meeting that August. That evening it was dismantled and the background packed in a rented trailer while the mice were put in the back of McKay's station wagon for an early start the next day. The Plan was to reach Montreal by night.

"Seldon [scientist Seldon Bernstein] went with me," McKay remembered, "and we started about 3 a.m. I remember we had breakfast in Skowhegan," about 100 miles away. All went well as they drove steadily across New Hampshire and Vermont, heading for the Canadian border at the head of Lake Champlain. Entry for the mice into Canada had been arranged by William S. Murray and the wagon and trailer with their loads were to be given immediate passage at a designated customs post.

They had, however, no written laissez-passer and when they reached the entry point at the border the word from above to pass them through had not reached the men at the post. This was in remote Quebec, and the guards' English was scanty. They kept running around talking about "le petit souris," McKay says, but were persuaded after a bit to call McGill University, which was host to the Genetics Congress. With assurances that the mice were indeed headed only to the McGill ice hockey arena, where exhibits were set up, and definitely not to be scattered about the country, the guards let them proceed.

The mice had to spend another night in the car, but the next day, with all the Jackson Laboratory staff attending the Congress lending a hand, the exhibit went up quickly.

When it was ready Earl Green checked it out and then went on a tour around the arena. He remembered that the color projections, the mechanized exhibits, the sound and light of the exhibits which left him crestfallen and feeling that "Nobody was going to come over to our quiet booth and why didn't we put more excitement into the exhibit." Greeting friends and talking as he circled the area, Green became aware of a buzz of voices. He returned to the Laboratory's exhibit to find nearly one hundred people packed around it, while the other exhibits had only half a dozen or so people idly browsing.

It only proved again what had been shown many times before and since, the strong fascination the unusual colors and motions of mouse mutants have for almost everyone.