In this TED-style talk, learn more about how Derya Unutmaz is identifying the biomarkers for chronic disease in order to pave the way for precise diagnoses and new therapies for patients. 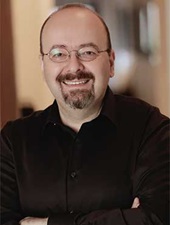 Derya Unutmaz has received his M.D. from Marmara University Medical School, Istanbul, Turkey. He did postdoctoral studies at Novartis, Switzerland and at NYU. He was an assistant professor at Vanderbilt University, where he received tenure and promoted to associate professor.  In 2006, he moved to NYU School of Medicine as tenured Professor of Microbiology, Medicine and Pathology. Since 2015 he has been Professor at Jackson Laboratory for Genomic Medicine, in Farmington, CT, and affiliated Professor at UConn School of Medicine. He is currently the director of Collaborative Research Center for ME/CFS at Jackson Laboratory.

He has published more than 100 original papers, including in Nature and Science, and is a co-inventor in 7 patents. He is the Immunology section editor of PLoS One journal since its inception and frequent reviewer at NIH grant committees. He also served as reviewer in more than 50 NIH study sections and international review committees, and was steady member of NIH, NIAID, AIDSRRC study section between 2009 and 2014. He is currently the director of NIH funded Collaborative Research Center for ME/CFS at the Jackson Laboratory for Genomic Medicine in Farmington, CT.

Today: Chronic fatigue syndrome, (also called myalgic encephalomyelitis or ME/CFS) a highly debilitating and poorly understood chronic disease, affects between 836,000 and 2.5 million Americans. Symptoms include profound fatigue, cognitive dysfunction, sleep abnormalities and pain. This mysterious disease can look similar to many other illnesses and the cause is unknown. There’s currently no test to diagnose ME/CFS, so patients have to endure a lengthy process of elimination before knowing whether they have it.

In the future: Imagine a world in which patients can have their blood samples screened for potential immunological biomarkers of ME/CFS. No stigma, no waiting, no process of elimination: just a smart diagnostic tool that can lead to personalized treatments for the disease.

JAXtaposition: Derya Unutmaz, M.D., JAX immunologist and renowned expert in HIV, is finding ways to diagnose and treat ME/CFS by tracking down the immune, metabolic and microbiome changes that lead to the disease.