Pharmacogenomic test reports provide information about the impact of any variants identified on the function of the metabolizing enzyme. Often this information is provided in the context of dosing considerations for specific drugs.

The genotype reported may be expressed in two different ways.

If not included on a report, the specific DNA variant(s) in an allele can also be identified through PharmVar and other resources. These genomic results provide data about the location of the variant and its impact on the resulting amino acid. 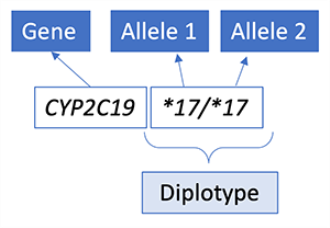 Results are commonly reported as a diplotype, which includes one maternal and one paternal allele that are both important to evaluate to predict clinical outcome.

In this example, CYP2C19*17/*17 denotes 2 increased function alleles (*17) inherited for the CYP2C19 gene, and this result predicts an ultrarapid metabolizer phenotype (see Table 1).

In some cases, patients have more than two copies of a gene, due to copy number changes (insertions, deletions, and duplications of segments of DNA are also collectively referred to as copy number variants).

Those alleles are denoted by an “xN” following the allele designation, for example, CYP2D6*1/*2x2. 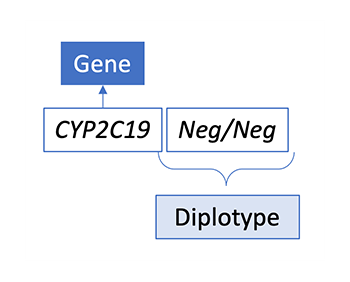 Some reference laboratories will report an allele as “Neg” or Negative to indicate that no variants were detected by the assay.

A result of “Negative” for an allele may be interpreted as *1 or normal function.