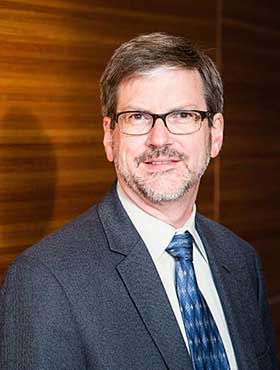 Development and application of approaches for human and mouse microbiome analysis and genomic analysis of the evolution of Gram-negative pathogens.

Dr. Adams comes from a rich background including industry, government, academic, and nonprofit settings. Throughout, he has focused on applying leading edge genomic and bioinformatic approaches to a variety of research problems in biology.

As one of the founding scientists at TIGR, Dr. Adams contributed extensively to the first genome sequence of a free-living organism, Haemophilus influenzae, and other microbial genomes. A co-founder of Celera Genomics, he led the DNA sequencing and genome annotation groups. He directed the Drosophila, human, and mouse genome sequencing projects, and a large-scale re-sequencing program to identify novel SNPs in humans.

From 2003-2011, Dr. Adams was Associate Professor of Genetics at Case Western Reserve University where he developed a research program in the evolution and mechanisms of antibiotic resistance in the nosocomial pathogen Acinetobacter baumannii. He also served as Director of the Genomics Core facility.

From 2011-2016, Dr. Adams was the Scientific Director and Professor at the J. Craig Venter Institute. There he directed programs that characterized genomic changes in the evolution of antibiotic resistance in hospital-acquired infections.

Dr. Adams received a B.A. in Chemistry from Warren Wilson College in Swannanoa, NC and a Ph.D. in Biological Chemistry from the University of Michigan.

Knowledge regarding the genomic structure of Enterobacter spp., the second most prevalent carbapenemase-producing Enterobacteriaceae, remains limited. Here we sequenced 97 clinical Enterobacter species isolates that were both carbapenem susceptible and resistant from various geographic regions to decipher the molecular origins of carbapenem resistance and to understand the changing phylogeny of these emerging and drug-resistant pathogens. Of the carbapenem-resistant isolates, 30 possessed blaKPC-2, 40 had blaKPC-3, 2 had blaKPC-4, and 2 had blaNDM-1 Twenty-three isolates were carbapenem susceptible. Six genomes were sequenced to completion, and their sizes ranged from 4.6 to 5.1 Mbp. Phylogenomic analysis placed 96 of these genomes, 351 additional Enterobacter genomes downloaded from NCBI GenBank, and six newly sequenced type strains into 19 phylogenomic groups-18 groups (A to R) in the Enterobacter cloacae complex and Enterobacter aerogenes Diverse mechanisms underlying the molecular evolutionary trajectory of these drug-resistant Enterobacter spp. were revealed, including the acquisition of an antibiotic resistance plasmid, followed by clonal spread, horizontal transfer of blaKPC-harboring plasmids between different phylogenomic groups, and repeated transposition of the blaKPC gene among different plasmid backbones. Group A, which comprises multilocus sequence type 171 (ST171), was the most commonly identified (23% of isolates). Genomic analysis showed that ST171 isolates evolved from a common ancestor and formed two different major clusters; each acquiring unique blaKPC-harboring plasmids, followed by clonal expansion. The data presented here represent the first comprehensive study of phylogenomic interrogation and the relationship between antibiotic resistance and plasmid discrimination among carbapenem-resistant Enterobacter spp., demonstrating the genetic diversity and complexity of the molecular mechanisms driving antibiotic resistance in this genus.
Copyright © 2016 Chavda et al.
View full list of publications

The Connecticut Microbiome Initiative seeks to promote investment and collaboration to facilitate development of microbiome-related...

In this intensive 2 day workshop, participants will be introduced to theory, experimental design, analysis and interpretation of microbial...

In this intensive 2 1/2 day workshop, participants will be introduced to theory, experimental design, analysis and interpretation of...

In this intensive 2 day workshop, participants will be introduced to theory, experimental design, analysis and interpretation of microbial...