Reinforcing the need for continued vigilance in testing during vaccine distribution 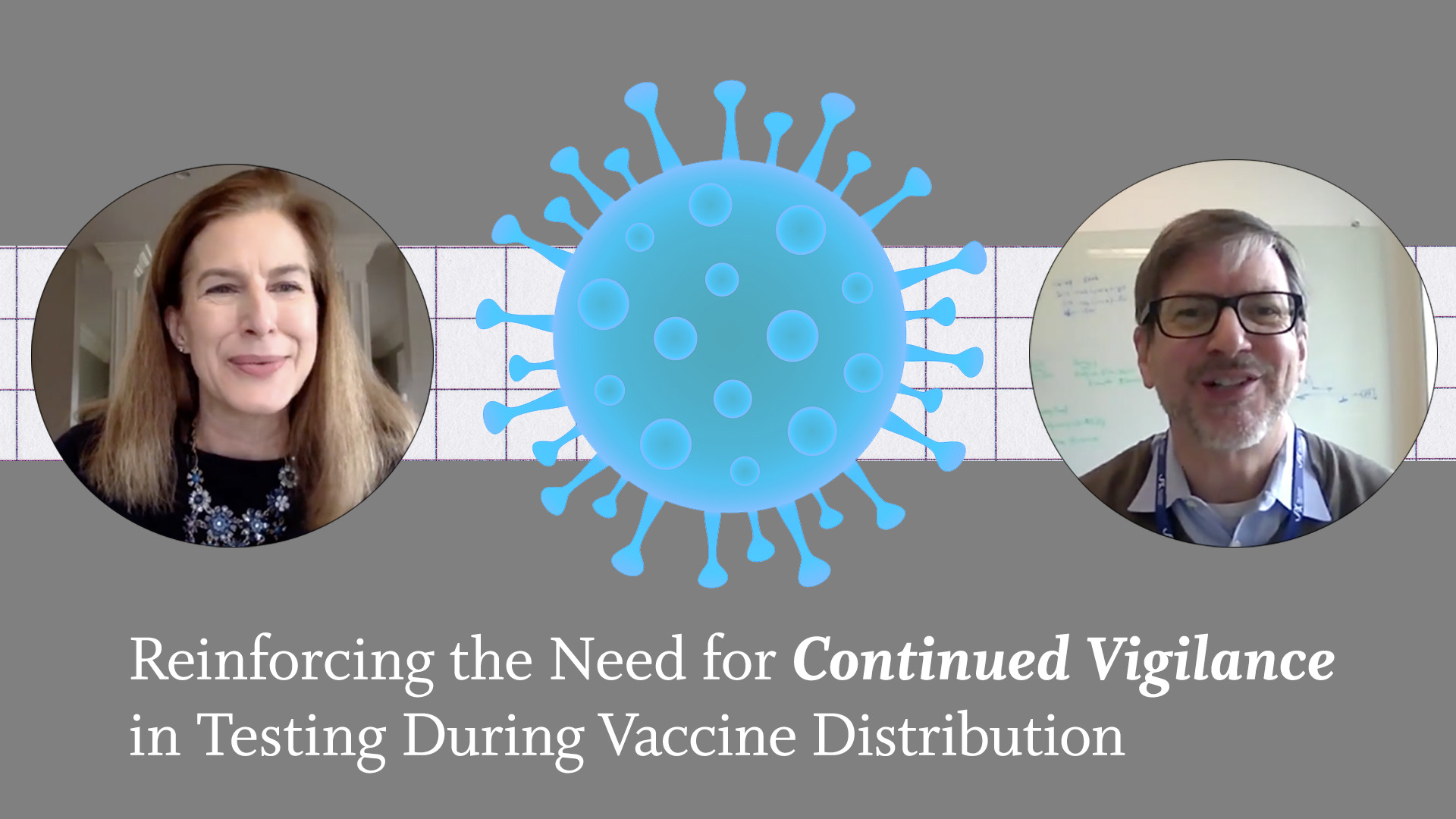 While Connecticut’s vaccine rollout is progressing successfully, with the state ranking fifth nationally for the highest percent of the population vaccinated, continued public testing and caution are still more important than ever.

Mark Adams, Ph.D.Develops new clinical diagnostic assays with The Jackson Laboratory CLIA Laboratory; approaches for human and mouse microbiome analysis; genomic analysis of the evolution of Gram-negative pathogens.Mark Adams, Ph.D. , professor and deputy director at The Jackson Laboratory for Genomic Medicine (JAX) joined with Lt. Governor Susan Bysiewicz on Thursday, Jan. 14,  to emphasize the importance of continued vigilance by the public in testing and maintaining precautionary measures to limit virus transmission in the coming months.

The event (viewable here), which was open to Connecticut-based media outlets and featured panelists from The Jackson Laboratory, an independent nonprofit biomedical research institution, health intelligence company Sema4 and Community Health Center Inc., a federally qualified community health center, highlighted the success of the state’s COVID testing programs, as well as the importance of continued testing and coronavirus mitigation efforts as Connecticut moves forward with open registration of those eligible for vaccination under Phase 1b.

While the Lt. Governor began by noting Connecticut’s successes in the face of the ongoing health crisis, thanks in part to an incredibly robust testing program, she emphasized that the vaccine rollout process will take time, which is why ongoing testing and precautions are as crucial as ever.

“We want to stress how important it is to be vigilant, to continue to get tested, to wear masks, to practice social distancing and to wash hands,” she said.

JAX in the fight against COVID

Dr. Adams expressed appreciation for the administration’s action when the virus hit: “The leadership of the state has really been instrumental in pulling together all  the pieces necessary to create this testing infrastructure,” he reflected.

When JAX approached the Governor’s office to aid in Connecticut’s testing effort in March, the State Public Health Laboratory (SPHL) had the capacity to process 25 tests per day.  This early partnership drove JAX to quickly pivot its licensed CLIA (Clinical Laboratory Improvement Amendments) and CAP-accredited laboratory’s focus from tumor profiling to coronavirus testing to aid in the state’s pandemic response.

“Pivot is a good word, but pivot doesn’t really begin to accomplish it,” Adams said of the CLIA lab’s evolution. “It’s a little bit like turning a sailboat into a cruise liner.”

The Jackson Laboratory has engaged in significant investment to scale up testing capabilities at their Conn. facility, from 150 to 10,000 tests per day.  This has included expansion of CLIA lab staff from 15 to close to 100 employees, and the addition of significant automation, equipment, and IT infrastructure.  JAX currently works with nearly 200 Connecticut partners, providing approximately 20-25 percent of PCR testing statewide, and hit its 1 millionth test on Saturday.

Dr. Adams expressed that having in-state testing facilities at JAX and other sites is key to successfully returning results for residents as soon as possible, in an effort to stop the virus’ exponential spread.

“We have always prioritized a 24-hour turnaround time on test results so  if someone is, in fact, infected, that’s important information to know in terms of managing their contacts, quarantine, etcetera,” he said, adding that sending tests to other states or across the country significantly slows down the process.

Trying to detect the next COVID variant

Testing will continue to be a high priority for JAX. Adams said that the next crucial undertaking, which is already underway in its CLIA lab, is sequencing the SARS-CoV-2 genomes present in positive samples to detect emerging variants, including B.1.1.7. The SPHL is working with Yale and The Jackson Laboratory to conduct genomic sequencing on portions of COVID-19 positive specimens submitted to the SPHL by clinical diagnostic laboratories across the state.

Adams, addressing  public concern that two cases of the variant have been confirmed in the state, stressed that so far numbers across the country appear low overall, and that the CDC is currently reporting less than 0.3% indicate the B.1.1.7 variant.

The sequencing process is complicated, can be time-consuming and expensive, but Dr. Adams and his team at JAX are working on a simpler technique to discover B.1.1.7 cases, along with additional new variants.  The current SARS-CoV-2 test provides a “yes/no” answer, said Adams. As the virus is transmitted through populations and individuals, tracking its evolution through genome sequencing is the next big step.

We are really reaching a point where it may very well be important from both a personal and public health standpoint to track these emerging viral lineages and use the knowledge we gain, to inform the ongoing planning and management of the pandemic, Adams said, adding that he thinks genome sequencing will play an important role in that process.