Are we missing the window for pre-diabetes in NOD/ShiLtJ mice?

One major issue with studying type 1 diabetes pathogenesis has been determining at what stage the mice are pre-diabetic. Using conventional technologies to measure blood glucose levels over time have proven cumbersome, and advances in these systems are desperately needed to obtain accurate readings. The use of wireless telemetry devices allows continuous monitoring of glucose levels without directly interfering with normal activities, delivering more accurate readings. In doing so, a possible pre-diabetic stage of diabetes onset emerges in this mouse model. The pre-diabetic stage is an important landmark for understanding the mechanisms of beta-cell loss, as well as a crucial timepoint for possible interventions.

Korstanje and colleagues at The Jackson Laboratory provide a first report published in the September 2017 issue of Endocrinology, of the use of telemetry to measure glucose and body temperature with unprecedented resolution during disease onset in female NOD/ShiLtJ mice (Stock# 001976), a model of type I diabetes. Their research involved monitoring the circadian rhythms of glucose change with the onset of diabetes, made possible with the use of wireless telemetry devices. Historically, continuous glucose monitoring was difficult, as the mice were tethered to a communication device. As one can imagine, this disrupts normal mouse behavior and therefore introduces a host of confounding variables into the studies.

Wireless telemetry is a relatively new approach that circumvents this limitation and also allows the additional measurement of body temperature. Mice were surgically implanted with telemetry monitoring systems to record measurements on both glucose and body temperature at 10 second intervals for 12 weeks. This resulted in an impressive ~7 million point data set by the end of the study!

What’s going on at night?

For obvious reasons, the majority of diabetes studies involve taking blood glucose samples from mice during the normal workday.  This imposes limitations on how relevant the readings may be, as even mice that have not technically been fasted have likely been sleeping for hours (and not consuming food).

To complicate matters, it is common for NOD/ShiLtJ mice to have normal (under 250mg/dL) blood glucose readings for several days, and the next day suddenly have much higher readings – a gradual increase is not generally seen. How is it that mice are ‘healthy’ one day, and ‘diabetic’ the next?

NOD/ShiLtJ mice gradually increase glucose during the onset of diabetes

Using wireless telemetry to continuously measure glucose samples throughout the active (night) period, researchers were able to observe a gradual increase in blood glucose concentrations, (Figure 1) leading up to the appearance of overt diabetes during the day. Surprisingly, this change could be seen up to five days prior to when the mice would have traditionally been labeled as diabetic. This five day time period may be the perfect time to begin possible intervention treatments – as a possible pre-diabetic stage. 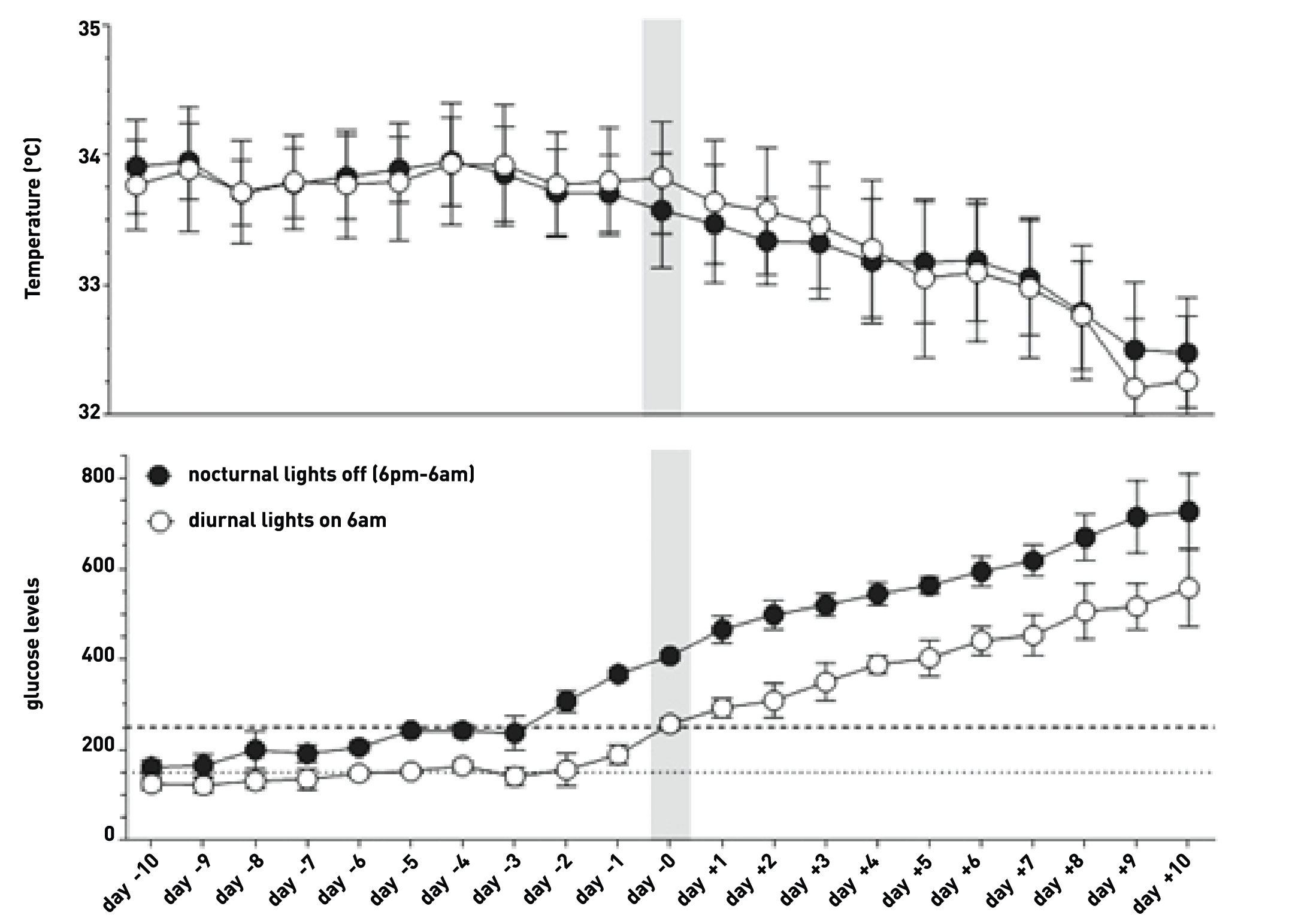 Figure1. Relationship between blood glucose concentrations and body temperature. Glucose levels and temperature at each time point for the four mice that became diabetic, using a time scale where day 0 is the day when the mice reached an average diurnal glucose level of 250 mg/dL (data presented as mean ± standard error of the mean; n = 4 per time point). Reproduced from Korstanje et. al Endocrinology, Volume 158, Issue 9, 1 September 2017, Pages 2707–2712 with permission of Endocrinology, Oxford University Press.

The other major (and unexpected!) finding was an inverse relationship between body temperature and blood glucose concentration (see Figure 1). As blood glucose concentrations increase, a corresponding decrease in body temperature is clearly shown. This phenomenon would never have been noticed without the use of telemetry, and has not been previously shown. However, this is an exciting finding as the diabetic population has a documented vulnerability to heat stress, making this a valuable research tool in understanding body temperature regulation in diabetes.

This study revealed surprising information relating to the relationship of blood glucose and body temperature – namely, showing the relationship! In addition, using cutting edge wireless telemetry technology allows researchers to have new insights as to the progression of diabetes onset in these female NOD/ShiLtJ mice. The results establish telemetry as an approach that can illuminate new findings in well-characterized models, as well as improve upon the current knowledge of type 1 diabetes pathogenesis.

Mice in the described study were implanted with wireless telemetry by The Jackson Laboratory’s Surgical Services group, which provides surgical implantation of telemetry monitoring systems.

In a previous blog post, we discussed some important Do’s and Don’ts of working with diabetic mouse models. Here we will discuss some of the most…

The past and future of personalized medicine

While personalized medicine is an emerging field, the logic behind it is nothing new.

NSG strains require special practices and preventive measures to maximize their research value, and in this article, we’ll go over important…