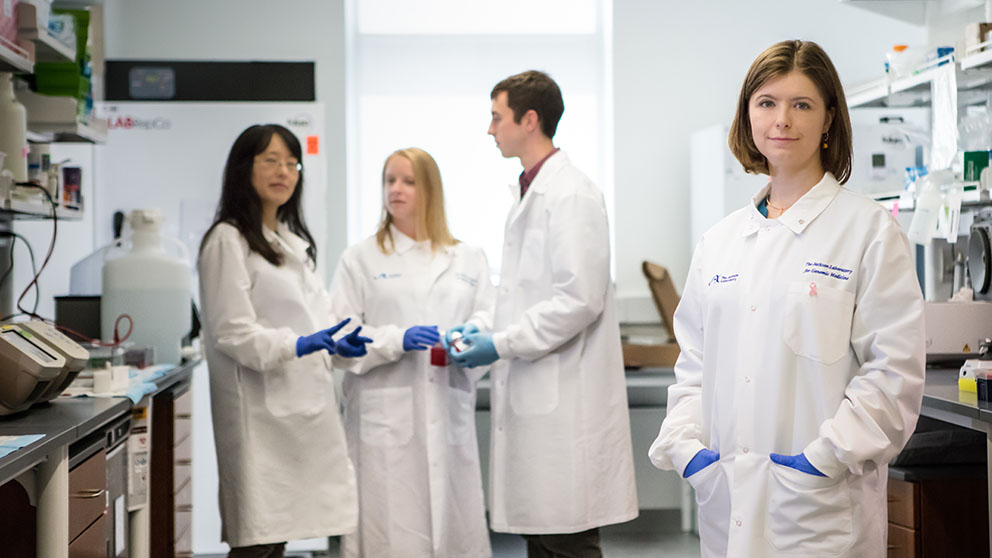 The MYC oncogene is well-known for its ability to drive tumor formation while remaining an elusive therapy target. The gene’s role in regulating alternative splicing in cancer has now been deeply profiled by Olga Anczuków to provide a more complete understanding of MYC-driven cancers.

Humans have about 20,000 genes (give or take), far fewer genes than many so-called “primitive” animals, like Daphina pulex, a.k.a. the water flea, which has about 31,000. How then are humans able to be so complex with less genetic material? One answer: alternative splicing.

Splicing is part of the protein-making process that starts with a gene. Acting as the blueprint, the gene template consists of DNA where the desired coding regions (exons) are highlighted as essential building material for protein production while other areas are marked for removal. These non-coding regions (introns) are removed or spliced out from the template sequence, generating a mature messenger RNA that carries the genetic message that is used to make a protein.

Different combinations of exons can be selectively included in the final mRNA product in a process called alternative splicing. The process allows a single gene to code for multiple proteins which can vary in length, structure, and ultimately function to ensure cells have all the necessary tools from the same genetic code. Alternative splicing creates outstanding protein diversity from a limited pool of genes. The process is complicated and highly regulated by splicing factors. The operation doesn’t always go smoothly, however, and errors in alternative splicing can lead to disorders and disease, including the onset and progression of cancers.

MYC is one of many genes on the cancer-causing watchlist. Characterized as a proto-oncogene, MYC has the potential to promote multiple types of cancer. The gene’s typical role is to generate proteins to ensure that the cell cycle goes smoothly, including the process of scheduled cell death. When MYC malfunctions, however, such as in its regulation of splicing factors, problems can begin to unfold.

Jackson Laboratory (JAX) Associate Professor  Olga Anczuków-Camarda, Ph.D.Investigates how alternative RNA splicing contributes to cancer with the goal of identifying novel clinical biomarkers and targets for precision medicine.Olga Anczuków, Ph.D. , co-Program Leader at the National Cancer Institute (NCI)-designated  The JAX Cancer CenterThe Jackson Laboratory Cancer Center (JAXCC) is a National Cancer Institute-designated Cancer Center complemented by institutional education, resource and service initiatives that support cancer research world-wide. The JAXCC comprises approximately 50 members with multidisciplinary expertise who are united in research aimed at understanding and targeting the genomic complexity of cancer.JAX Cancer Center , investigates alternative splicing and its contribution to cancer. In her most recent research, published in Cell Reports, and funded by an NCI R01 grant, Anczuków and her lab have taken a deep dive into the roles MYC plays in tumor onset and progression. Her findings provide insights into the partnership between MYC and changes in splicing across 33 tumor types.

Previous studies identified individual splicing factors that may work with MYC to promote cancer initiation. Anczuków took the work a step farther, looking for a more global understanding of how MYC regulates alternative splicing. Beginning with breast tumor data in The Cancer Genome Atlas (TCGA), Anczuków and Laura Urbanski, an M.D./Ph.D. graduate student from UConn Health, characterized the alternative splicing landscape in MYC-active tumors. They discovered that MYC-active tumors display a unique splicing signature and identified groups of splicing factors, called splicing factor modules, that were systematically expressed together at very high levels in breast tumors where MYC was overactive.

Splicing across all tumors

Moving beyond breast cancer, the team found that some splicing factors were associated with MYC in multiple tumor types, while others only in very specific tumor types. However, one group of splicing factors, specifically SRSF2, SRSF3, and SRSF7, was co-expressed across all 33 MYC-active human cancers studied. While previously implicated in various cancers, the individual splicing factors do not appear to initiate cancer on their own when overexpressed. The results suggest that the three splicing factors together need to be expressed to contribute to tumor formation and maintenance. Anczuków and Urbanski further demonstrated that expressing all three splicing factors from this pan-cancer module impacts MYC-regulated alternative splicing in 3-D grown cell models of breast cancer and is required for cancer cell growth and invasion.

Finally, the study discovered a pan-cancer splicing signature detected in MYC-active tumors across all human cancer types. This signature correlated with patient survival across multiple tumor types, providing a pan-cancer tumor classifier of MYC status that could be used to predict prognosis and identify patients likely to benefit from splicing-modulating therapies.

Because it’s located mostly within the nucleus and lacks a highly specific binding site, MYC is difficult to inhibit therapeutically with either monoclonal antibodies or small molecules. Therefore, targeting associated processes, such as alternative splicing, may provide an effective workaround. Researchers are already investigating ways to directly inhibit splicing factors, disrupt their stability, or target the larger splicing machinery in MYC-active tumors, but how the splicing factor genes cooperate in the oncogenic process remains to be determined. But, as Anczuków’s paper indicates, targeting individual splicing factors may not be sufficient, and disrupting splicing factors that cooperate together might be needed instead. It may therefore be important to characterize MYC-regulated alternative splicing as part of the clinical implementation of any therapies targeting splicing.