A translationally-relevant alternative to non-human primates 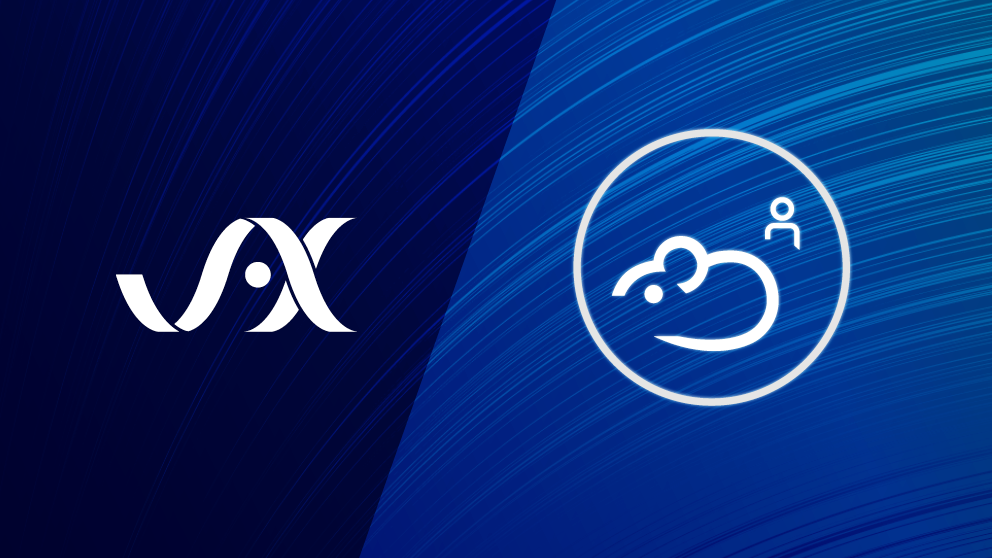 Just last week, the Food and Drug Administration (FDA) published recommendations to drug developers and researchers urging them to consider alternatives to non-human primates (NHPs) in general toxicology studies due to COVID-related shortages. This FDA document is the latest example of a trend started years ago to reduce NHP use in preclinical research.

NHPs are often considered the gold standard to assess the toxicity of immunostimulatory antibodies and related products since they share the highest level of gene homology with humans compared to the other preclinical animal models. The replacement of NHPs with in vitro assays risks missing cell non-autonomous toxic interactions that might happen only in vivo, such as the mechanism underlying the cytokine release syndrome (CRS). On the other hand, most in vivo preclinical models (such as rodents, dogs, and rabbits) lack the human-specific drug target and have very little translational value.

The hu-PBMC-NSG model is a translationally relevant experimental platform to evaluate immunotoxicity.

Designed to reproduce a functional human immune system on a smaller scale, JAX hu-PBMC-NSG mice are NSG™ immunodeficient mice engrafted with pre-characterized human peripheral blood mononuclear cells (PBMCs). The engrafted mice evolve from simply a “rodent model” to a translationally-relevant in vivo platform. The translational value of hu-PBMC-NSG mice becomes obvious in CRS evaluation studies. For example, unlike most preclinical assays currently available to drug developers, the hu-PBMC-NSG platform allows for the detection of the toxicity of a human-specific activator molecule such as the CD28 superagonist TGN1412 (Fig 1).

Fig.1 hu-PBMC-NSG mice were injected with solvent (PBS) or two different versions of superagonists of CD28/anti-CD28 and TGN1214. The bars indicate the amount of the pro-inflammatory cytokine induced by the indicated compound. The horizontal axis shows different donors (A, B, and C). Note that the level of hyperactivation of the immune cells by the T cell superagonists anti-CD28 and TGN1412 vary from donor to donor, reflecting the natural variability of the response in a human population.

Utilizing the hu-PBMC-NSG model as a platform to evaluate the immunotoxicity of monoclonal and bispecific antibodies.

In contrast to NHPs, researchers can engraft hu-PBMC-NSG mice with tumors to assess the effect of target engagement on the immunotoxicity elicited by the compound. This feature is crucial when testing the CRS potential of bispecific antibodies such as CD3 engagers, which require the concomitant engagement of both arms to express their activity and potential toxicity (Fig. 2). In fact, one could argue that hu-PBMC-NSG mice are more relevant than NHPs for the toxicological evaluation of immuno-oncology drugs since researchers can evaluate the immunotoxicity in the presence of the target tumor. 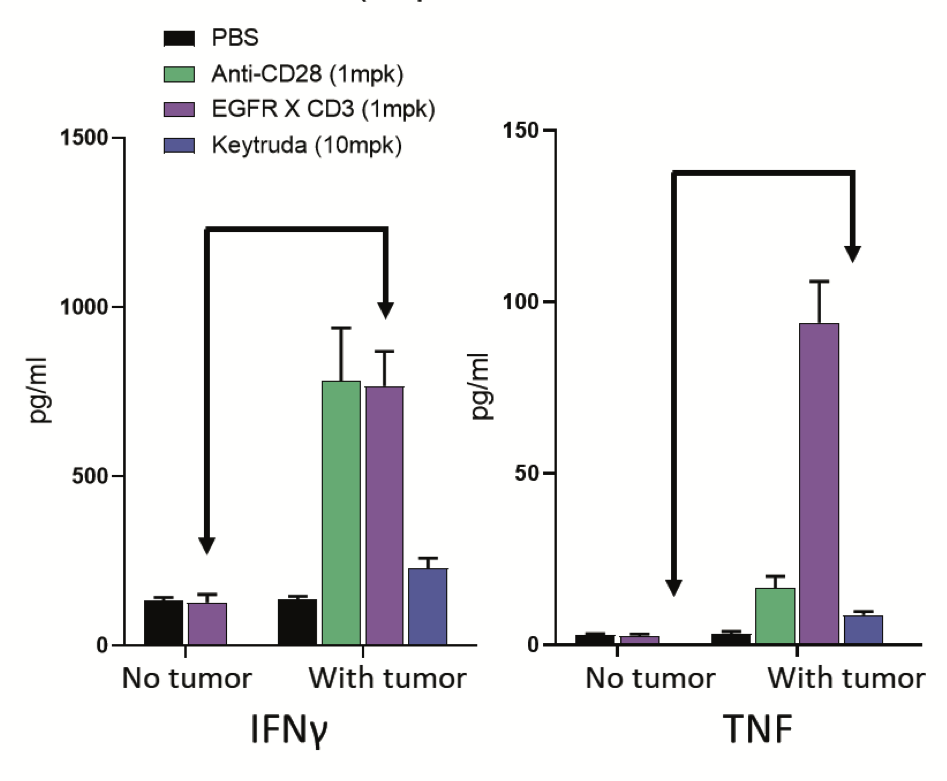 Fig 2. hu-PBMC-NSG with or without MDA-MB-231 were treated with PBS (vehicle), anti-CD28 (positive control), Keytruda (negative control) or a CD3 engager raised against EGFR. Only the tumor-bearing mice show immunotoxicity mediated by the bispecific antibody (as highlighted by the arrows)

Using the hu-PBMC-NSG platform to evaluate the immunotoxicity of drug combinations.

An additional use of hu-PBMC-NSG mice is predicting the CRS potential of drug combinations. While cost, ethical, and practical considerations limit the usage of NHPs in testing multiple drug combinations, hu-PBMC-NSG mice provide translational results that inform researchers about the potential toxicity and efficacy of specific drug combinations. Figure 3 illustrates an example where a CD3 engager targeting EGFR was combined with Keytruda. The results show that the combination does not increase the treatment toxicity, but does not yield any efficacy advantage either.

The hu-PBMC-NSG model is a translationally-relevant tool to test the immunotoxicity of CAR T therapies.

The response of hu-PBMC-NSGs to bispecific antibodies is also mirrored with CAR T cell therapies, which is particularly important since many patients see a severe toxic reaction in the form of CRS. Traditional in vitro assays cannot mimic the systemic immune response that causes downstream organ and neurological toxicities seen in patients, a crucial feature for determining the true efficacy and safety of the therapeutic.

In an assay that is completed in less than 16 days, the humanized mouse platform is focused on individual patient responses, where CAR T efficacy and CRS can be measured together using individually characterized PBMC donors, simulating patient responses seen in a clinical setting (Figure 4). 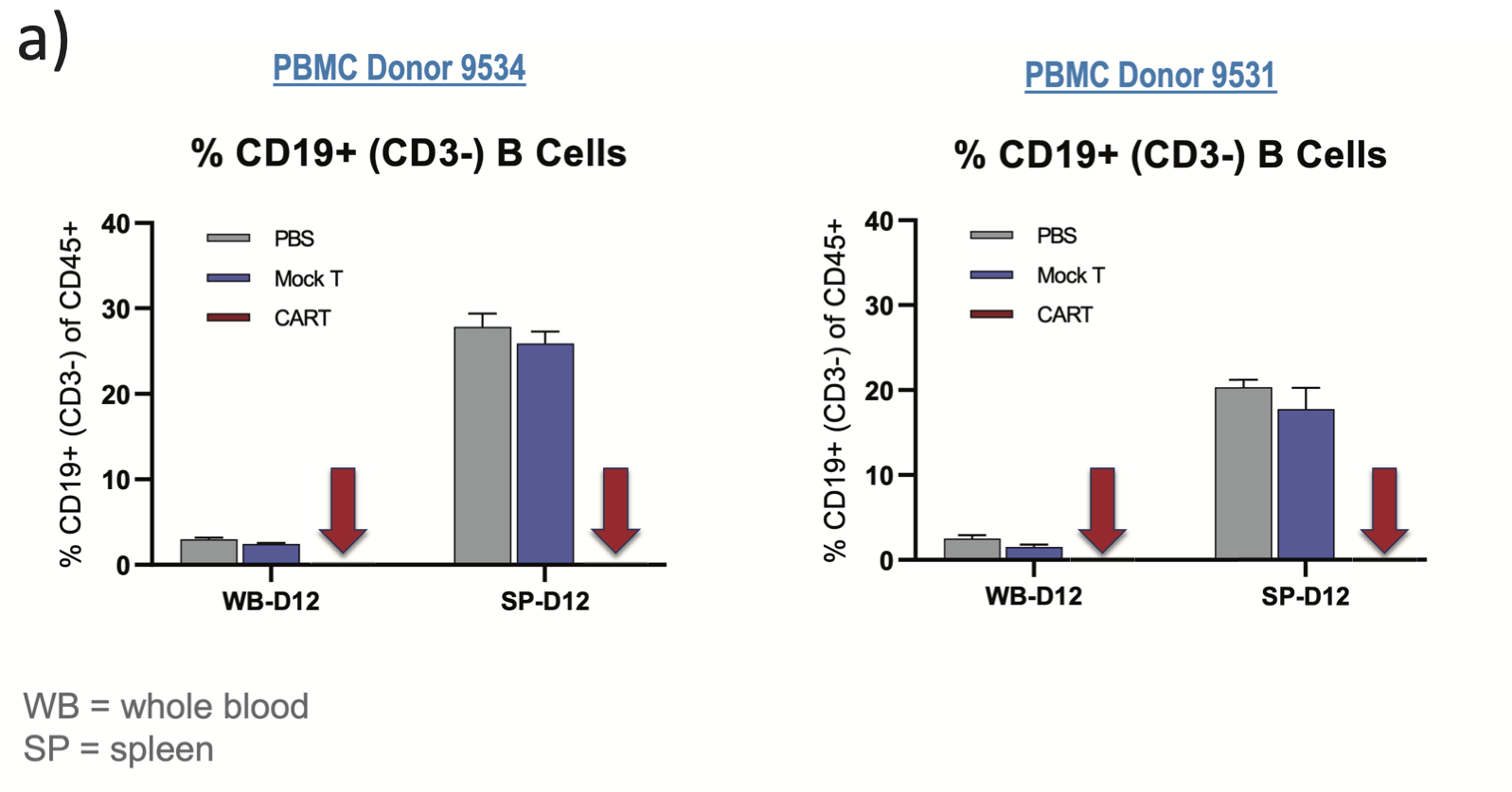 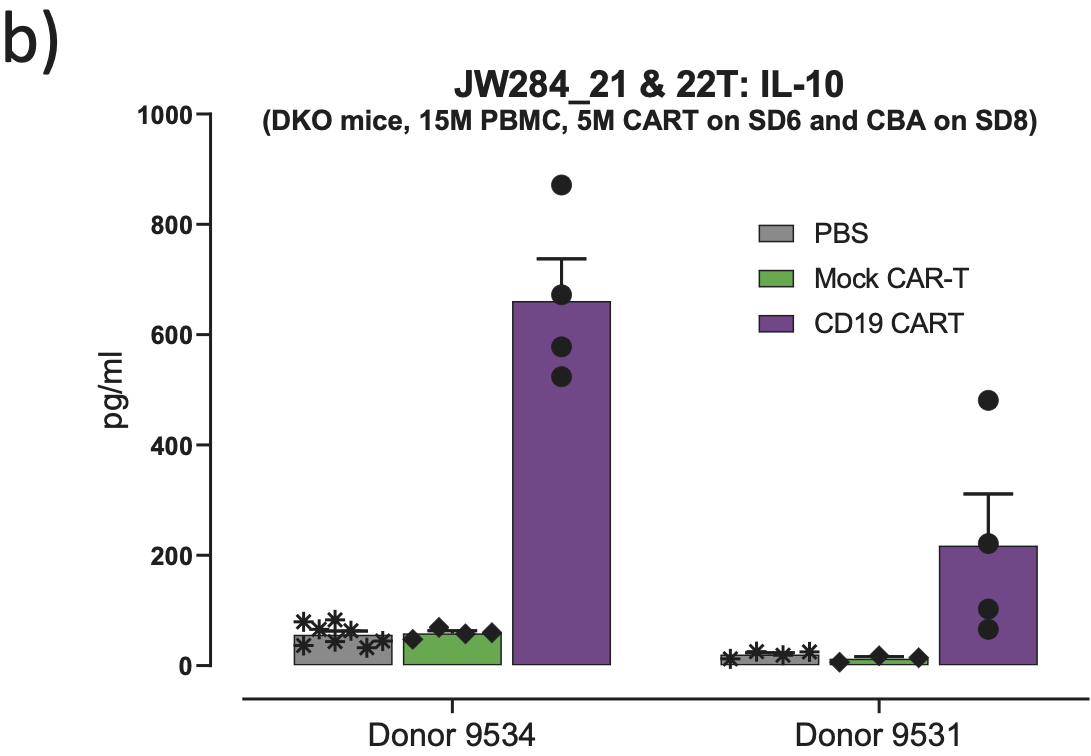 Fig. 4. Different donors show differential activity/toxicity ratios. When comparing two separate donors in Figure 4a, the mock CAR T treatment had no impact on B cell frequency in blood or spleen in either study. The arrows representing CAR T point to the 100% depletion of PBMC derived normal CD19+ B cells, showing that efficacy and response for both donors was complete. Figure 4b shows a very different cytokine response between the two donors (in this case, IL-10 is shown), suggesting that donor 9531 might benefit from the CAR T treatment without extensive toxicity. WB: whole blood; SP: spleen

A significant advantage of in vivo models over in vitro approaches is the possibility of mimicking complex, multi-organ responses that result in complex phenotypes such as clinical manifestations and body weight loss. For example, when examining the body weight data for the same study as the previous two figures, we see significant differences in body weight consistent with the cytokine levels. This data supports the holistic value in assessing CAR T in an in vivo assay with a humanized platform to examine the overall impact of the cytokine response on the health of the mice, which cannot be achieved using in vitro or a non-humanized platform.

Fig. 5. Mean body weight for hu-PBMC-NSG mice humanized with cells from donors 9534 (left) or 9531 (right). The symbol corresponding to each of the treatments is shown in the bottom left of each graph. Note that mice humanized with donor 9534 and treated with the CD19 CAR T show signs of suffering due to CRS (arrow).

The use of a humanized system that combines a fully functional human immune system with human targets offers a more predictive data set that better mirrors the diversity and variance seen within a unique human population. For more information of the use of humanized mouse platforms for antibody pharmacokinetic, efficacy, and toxicity studies, please visit the resources below or contact a JAX expert.