A Cre switch for transgenes

The Cre/lox system is one of the most powerful and versatile tools developed for mouse genetics. It gives mouse researchers sophisticated control over the location and timing of gene expression. Cre/lox is usually used to make knockout alleles, but it can also be used to activate gene expression.

The proper insertion of a loxP-flanked “stop” sequence (transcriptional termination element) between the promoter and transgene coding sequence blocks the expression of the gene. For a few examples of such strains, check out 008179 and 006481. Cre recombinase removes the stop sequence, so the transgene is expressed only in the cells where Cre is active (see Figure 1 below). 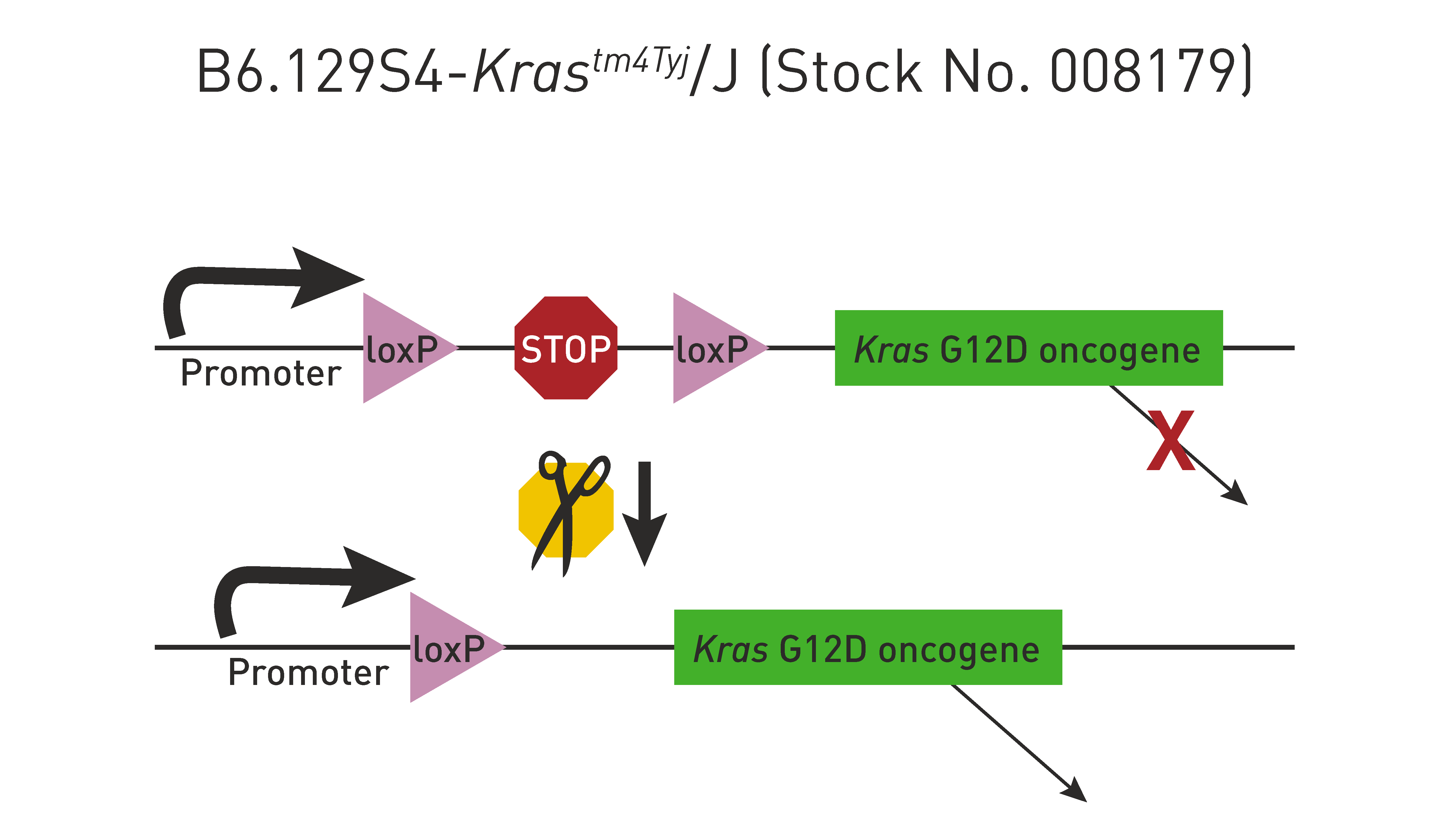 The Cre/lox system can also be used to produce strains in which a transgene is either inducible or expressed only in certain tissues. For example, mating the transgenic strain in Figure 1 to a strain that expresses Cre recombinase in mammary tissue produces double transgenic offspring that express theKras oncogene only in the mammary glands (Figure 2). Notice that only one generation of breeding is required (Hooray!). 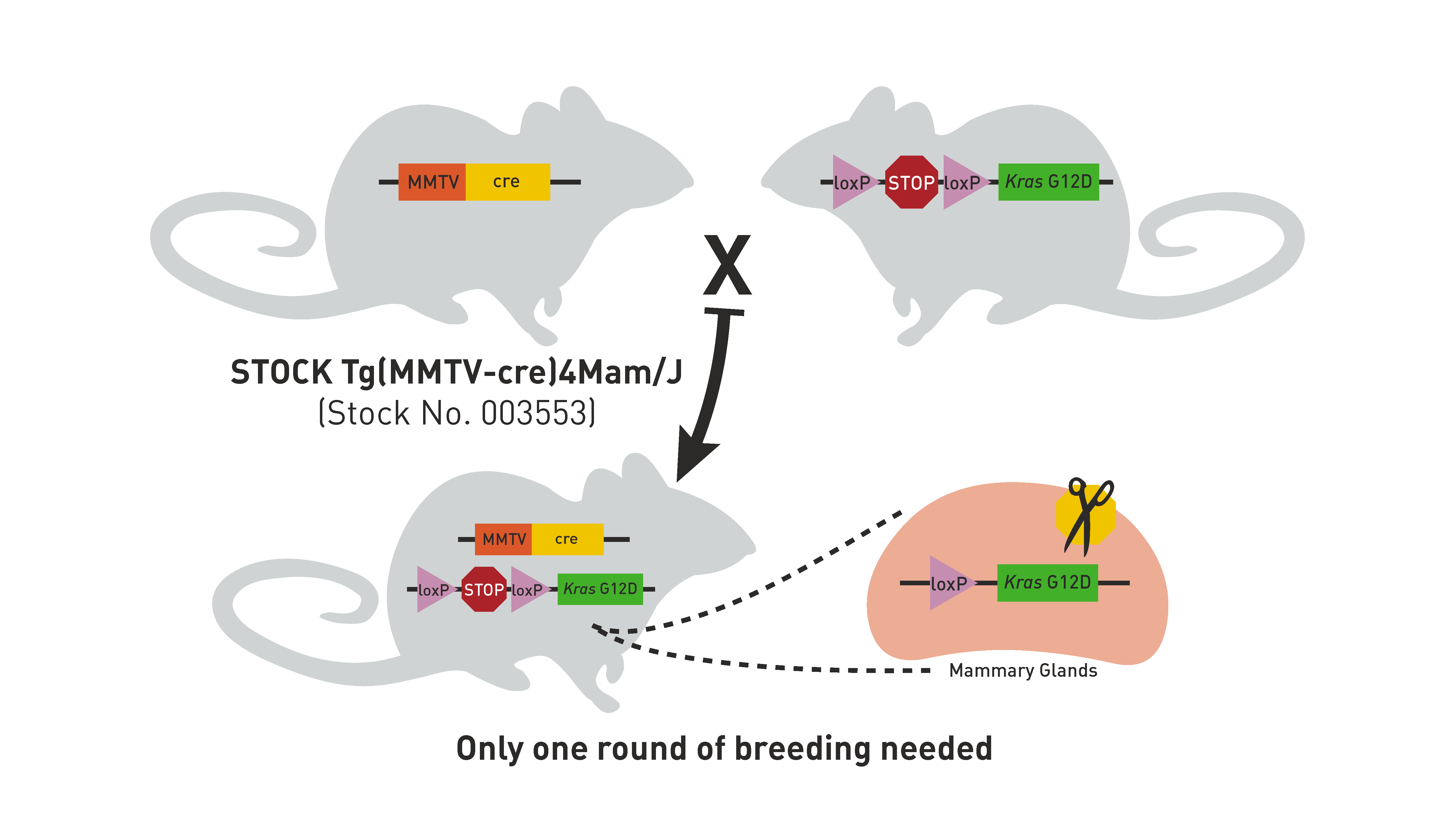 The Cre/lox system can be used to turn off a transgene. Such a transgene is designed with loxP sites flanking all or part of it. As an example, see 008917. In this example, expression of Cre recombinase removes the transgene (Figure 3). 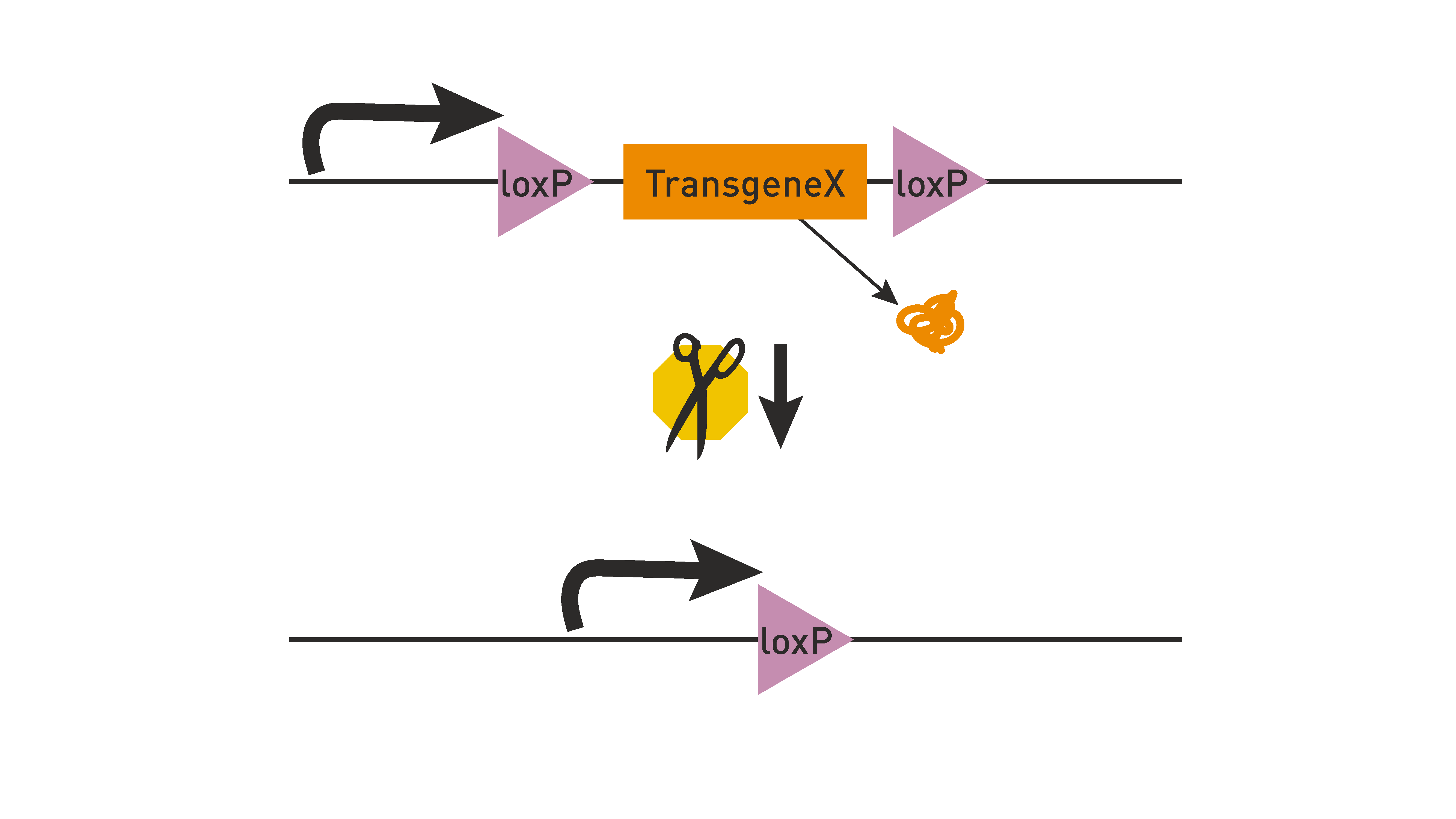 If you are looking for the right Cre-expressing strain for your experiments, you can search for strains at the JAX Cre Repository or through the Cre Portal at MGI.

When researchers started creating Cre recombinase mouse strains to generate tissue specific knockout mice, they needed an easy way to confirm that Cre recombinase was active only in certain tissues. This need led to the development of Cre reporter strains. These strains are designed to express a visible marker, such as green fluorescent protein (GFP) or LacZ, only after Cre recombinase excises a loxP-flanked stop sequence (Figure 4&5). 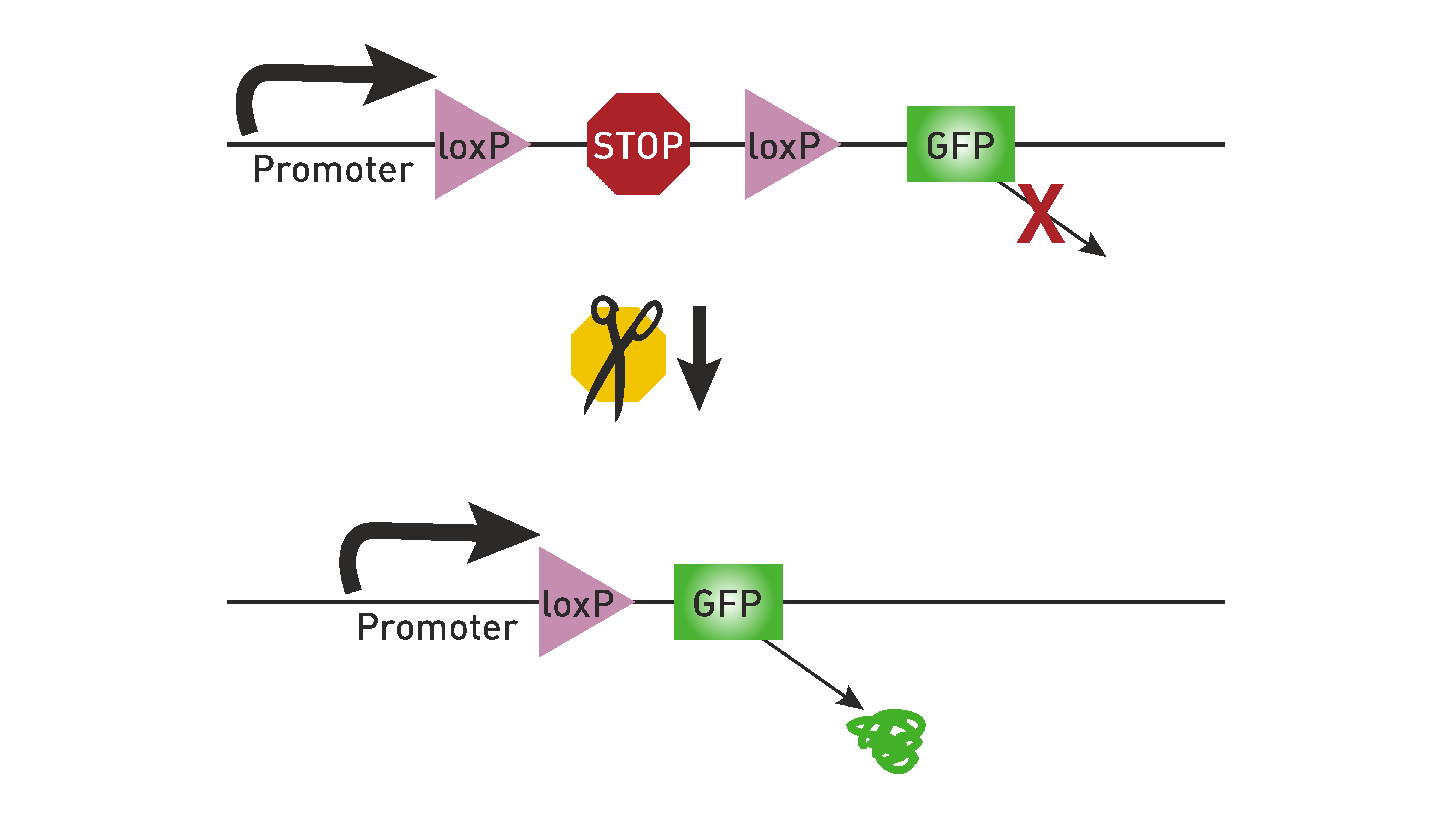 When such a reporter strain is mated to a Cre-expressing strain, it produces offspring in which the visible marker is expressed only in tissues with Cre activity (Figure 5). Again, only one generation of breeding is required. 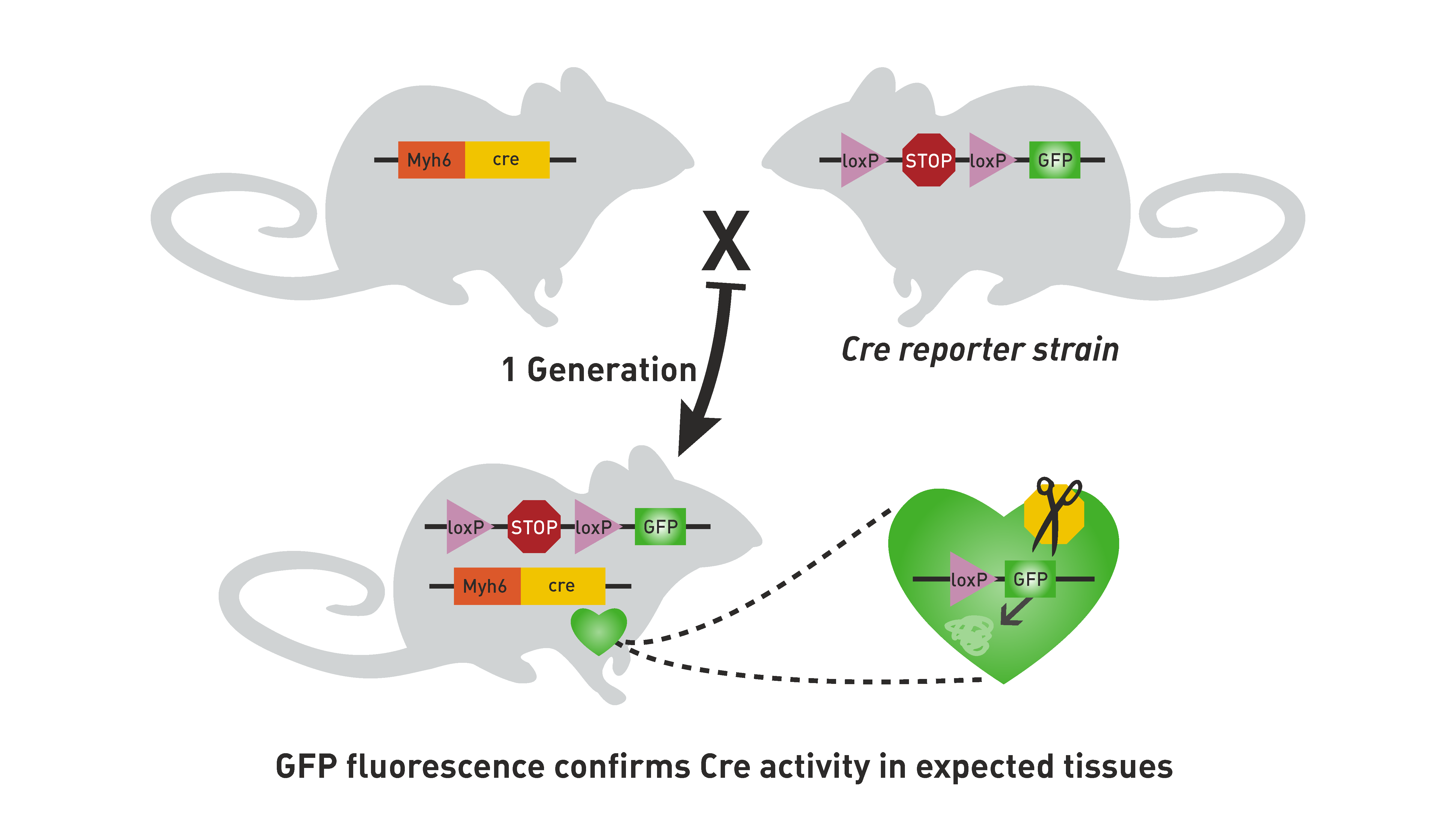 Cre reporter strains can also be used to generate a source of labeled tissues/organs, which allow researchers to track cells in transplant or adoptive transfer experiments.

Learn about CRISPR, Cre-lox through self-paced online JAX MiniCourses This new certificate program includes two self-paced MiniCourses that introduce basic genetic engineering techniques using the CRISPR/Cas9 and Cre-lox technologies. Both courses cover foundational concepts and provide an overview of how to use these sophisticated new tools to investigate and understand the genome.crispr-certificate-program