Focused on improving the lives of Alzheimer's patients 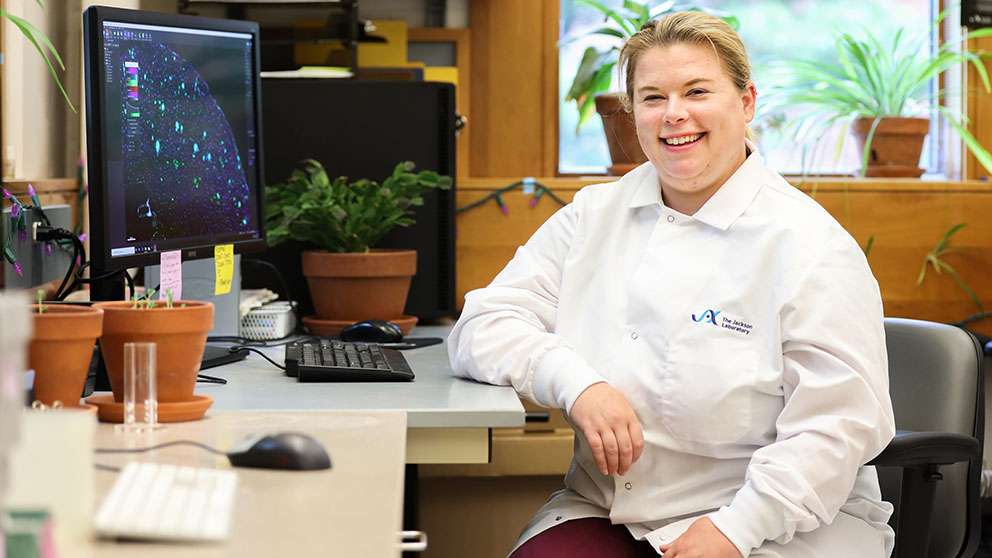 A photo of JAX's Kristen Onos in front of her computer. Photo credit: Tiffany Laufer

A surprise that launched a career

Kristen Onos, Ph.D., has always been interested in how the brain works. With a foundation in psychology and in search of a fulfilling career path, she signed up for a college exchange program at the University of Hawaii. Throughout her time in the Aloha State, she enjoyed learning about the nervous system and how it related to disease.

“I took a psychobiology course, and that was the first time I'd ever met someone that researched the brain using animal models. I loved hearing the details surrounding my professor’s early work,” says Onos. “For the final exam, he asked us to diagnose him.”

The class was stunned by this request and even more so at the realization they had spent the entire semester blind to the fact that their professor had Parkinson’s disease.

“This whole time, the symptoms were right in front of us, and we didn’t know. It was really motivating for me. I decided to pursue research on neurodegenerative disease, with the hope that I could help people within my lifetime. Ironically—or not so—both my paternal grandfather and maternal grandmother were since diagnosed with dementia.”

Beyond the amyloid hypothesis

Onos is now a research scientist working with Dr. Gareth Howell at The Jackson Laboratory (JAX). While much of her work is focused on understanding the interactions between vascular and immune risk factors, she is also part of a larger consortium, The Model Organism Development & Evaluation for Late-Onset Alzheimer’s Disease (MODEL-AD). Recently, Onos worked with Paul Territo, Ph.D, a professor of medicine at the University of Indiana to test an FDA-approved epilepsy drug, levetiracetam (LEV), in a rigorous, newly established preclinical testing pipeline. LEV is currently in clinical trials in hopes of being repurposed as a treatment for mild cognitive impairment (MCI) and Alzheimer’s disease (AD).

Published in Alzheimer’s & Dementia: Translational Research & Clinical Interventions, a journal of the Alzheimer’s Association, the study analyzed the relationship between LEV’s ability to move through the body and bind in the brain (pharmacokinetics), to the drug’s effect and mechanism (pharmacodynamics) in the commonly used 5xFAD mouse model. This was done through a large collaborative effort across multiple sites using human-relevant outcome measurements, such as PET/MRI scans and measurement of gene expression changes. Because LEV has been previously used in clinical practice and has been proven very safe, it was a great validation candidate for the pipeline.

“We were especially interested to test the pipeline by trying a drug that uses a different mechanism than the traditional Alzheimer’s disease treatments,” says Territo, “The thing about levetiracetam is we are targeting a mechanism separate from amyloid deposition or accumulation. We are targeting hyperexcited brain activity.”

The toxic buildup of amyloid plaques has long been recognized as a component of AD. In the past, research has focused mainly on anti-amyloid drug development. Overall, this has had little success, with the most recent FDA-approved AD drug, Aducanumab (Aduhelm™) coming under heavy criticism from the scientific community. It is becoming increasingly accepted that amyloid may no longer be the major player, but rather a result of other aberrant processes in the brain.

But why use an epilepsy drug in a patient with AD? Patients with epilepsy and patients with AD share some of the same brain characteristics.

“Some Alzheimer’s disease patients have seizures. The underlying reason behind seizures related to AD and to epilepsy is likely the same: a change in the balance between inhibition and excitation,” says Onos, “(Understanding) how we can tamp down this hyperexcitability may be an important way for us to intervene early.”

LEV works differently from typical anti-epileptics. It was recently discovered that LEV binds to a specific receptor (SV2A) in the brain that controls neurotransmitter release. Decreasing or blocking release of certain neurotransmitters may help to keep brain activity in check. As with most good things, what is great in moderation may be toxic in excess. By blocking overactive neurotransmitters with LEV, patients will hopefully experience less severe secondary issues such as amyloid build-up or inflammation.

Identifying that a drug might be effective is one thing. Actually testing its efficacy is a separate issue entirely. Expenses and time commitments become formidable barriers to bringing a drug from the bench to the preclinical stage. Having access to the right animal models to test that drug is also critical. Academic researchers can nominate their drug for a fully funded in vivo testing process through MODEL-AD where the drug will undergo qualification analysis, drug pairing, stability and formulation testing, biomarker identification, kinetics and dynamics studies and more.

Onos’ goals align well with MODEL-AD’s mission to create accurate, standardized models of Alzheimer’s disease accessible for researchers and clinicians around the world.

“I am a big advocate for open science and collaboration. I feel like we can do so much more if we all work together.”

The effort to find better AD therapies is challenging even so, but through MODEL-AD and her own work, Onos is making good on her goal to see real improvements in the lives of patients sooner rather than later.