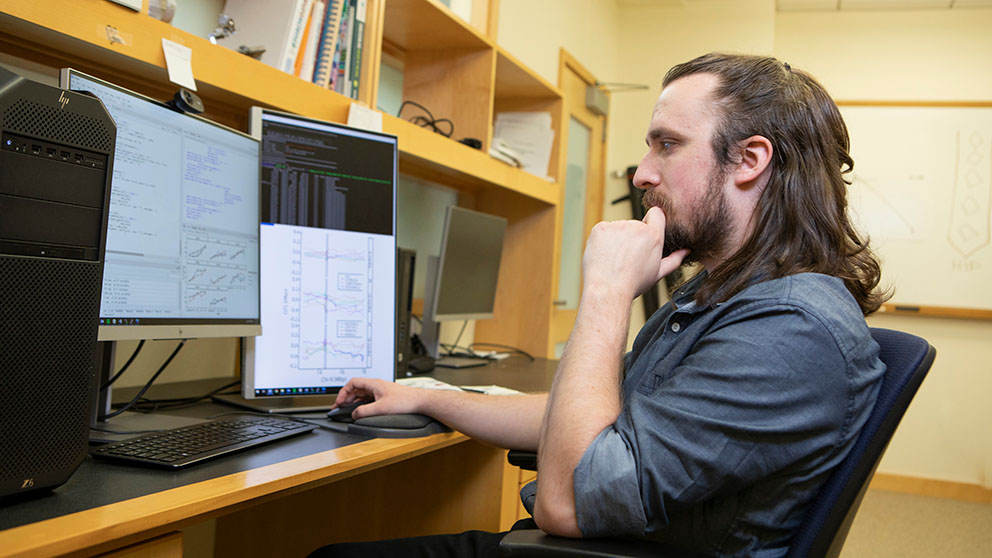 From forestry to neuroscience, Andrew Ouellette’s proclivity for science has earned him a place in the lab. Now, he is helping to discover new connections between life-long dietary restriction and the loss of cognitive function.

From the heart of the forest

Growing up in central Maine, Andrew Ouellette was drawn to ecology and environmental studies. But after graduating from the University of Maine with a specialty in forestry, he still didn’t know what, in his words, he “wanted to be.” Animal production at The Jackson Laboratory (JAX) offered steady work and, in the end, more direction. After a few years, he had developed a strong interest in biology and genetics, and the brain in particular, so he applied for a research assistant position in the laboratory of Professor Catherine Kaczorowski, Ph.D.

“I am going with the current,” says Ouellette now. “That is how you get from forestry to neuroscience.”

Inquisition and initiative made Ouellette a standout in the lab, and in 2019 he became a Ph.D. candidate in the very place he started as a research assistant. Now in his fourth year of study, Ouellette is the first author on a paper about his latest project, led by Kaczorowski and another mentor, Professor Gary Churchill, Ph.D. The paper, “Life-long dietary restrictions have negligible effects on late-life cognitive performance: A key role for genetics in outcomes” published in Neurobiology of Aging, delves into how genetic make-up mediates the loss of cognitive function as we age and whether dietary restrictions can offset this loss.

Caloric restriction (CR) and intermittent fasting (IF) are two types of diets that go hand in hand in life-long dietary research. Previous studies have shown CR and IF regimens improve lifespan, but its role in promoting cognitive health is disputed. This raises the questions as to how much should we read into these diets as tools to prevent or slow the consequences of aging, including cognitive decline.

Ouellette and his mentors are interested in answering this question and many more. Collectively, their research hinges on the hope to make data as applicable to as much of the population as possible.

While variations in data are typically unwanted, in Ouellette’s work it is essential. Increasing genetic diversity in mouse-based research increases the likelihood that it will mirror the responses of a wide range of people. Using genetically diverse mouse populations such as diversity outbred (DO) mice is an efficient way to have a greater impact when translating to human biology.

The research team followed five groups of DO mice, with one group reserved as a free-feeding control. Two groups of mice were on an intermittent fasting schedule of either one or two days each week, while the two other groups had their typical calories cut by 20 percent and 40 percent respectively. Cognitive function was tested at 24 months of age for each group.

How does one measure the cognition of a mouse? By using the mouse’s innate instinct to freeze when introduced to stimuli. On the first day, each mouse experienced four light stimuli underfoot, resulting in freezing. The amount of time the mouse remained frozen was recorded. On the second day, the experiment was repeated without stimuli, testing the mouse’s ability to recall the memory of the previous day.

Ouellette and his colleagues found the group with 40 percent CR lived longer, agreeing with previous findings. However, there was an overall loss of late-life memory recall, indicating that 40 percent CR is not as an effective tool for preserving cognitive function later in life.

Weighing in on genetic correlation

Addressing cognitive loss in the aging population is more complex than simply dieting. Genetics also play a significant role. Or, rather, heritability. Heritability is a scale method used to determine how well an observable trait can be linked to genetics. A score of 0 percent (0.0) means no genetics are involved, while a score of 100 percent (1.0) means a trait is solely dependent on genetics.

Ouellette found that the genetic background of the mice contributed to a heritability score of 55 percent (.55) of the variation in memory outcomes, far outweighing the effect of both CR and IF. Therefore, while diet does play a role in cognitive decline over time, there is likely a strong genetic component that mediates the effects of dietary restrictions on late-life cognition.

Zeroing in on a genetic target

Which genes play a role in the retention or loss of cognitive function over time? The answer is many. But one in particular has an association with memory outcomes, potentially shielding people from memory loss.

“We were able to identify SLC16a7 as a gene which may mediate an individual’s ability to maintain their cognitive function on a caloric restriction diet.” , says Ouellette The gene encodes a protein, MCT2, necessary for memory recall. The genetic variants associated with this gene may provide a basis for enhanced or worsened cognitive function later in life, potentially making it a game changer when predicting lifespan and cognitive function.

While there is much more work needed to better understand the implications of SLC16a7 variation, Ouellette takes the optimistic approach.

“If we can learn more about this gene and how identified variants change protein structure, gene expression, or both, there is the possibility down the road to develop a preventative therapeutic drug.”

Panning out, Ouellette believes this initial dietary study provides a foundation for the future. Quality of life becomes increasingly important with age, and he is confident the answers will continue to be revealed.

Ouellette’s research and that of the Kaczorowski lab will no doubt have ripple effects as reducing the consequences of aging becomes ever more essential from a public health standpoint. Continued research that links diet, genetics, and aging may help tip the scales towards finding what we all seek at the end of the day, a healthy balance.