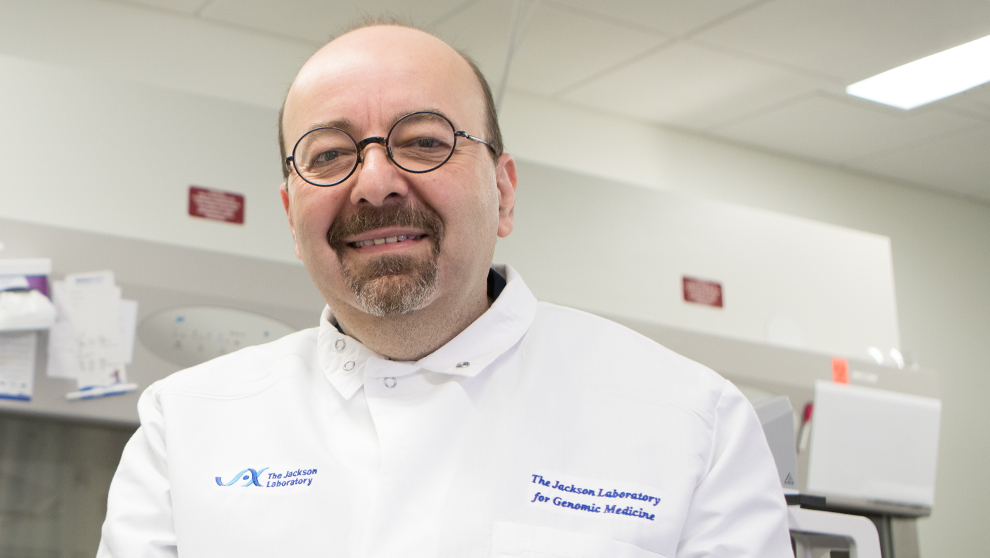 Derya Unutmaz in his lab at The Jackson Laboratory

With SARS-CoV-2 possessing the troubling ability to evolve into new versions of itself, it’s unlikely we’ll ever live in a world where variants of the virus do not exist. Thus, continuous development of more effective vaccines and treatments for COVID-19 remains essential. To answer this need, Derya Unutmaz and his team have capitalized on cancer immunotherapy techniques to develop potential variant-proof treatments for COVID-19.

As we now know all too well, SARS-CoV-2 is not going anywhere. The chaos of the initial wave of COVID-19 may be behind us, but the battle is far from won. The range of approaches to COVID-19 prevention and therapeutics is wide, varying in overall effectiveness. Having caused nearly 6 million deaths and leaving even more in chronic impairment, devising functional, accessible, and successful SARS-CoV-2 preventatives and COVID-19 treatments remains crucial.

Enter immunotherapy: CAR-T cell therapy has recently emerged as an effective immunotherapy for patients with blood cancers, with promising developments to treat solid tumors as well. Using the soldiers of the immune system, the T cell, CAR-T cells are engineered with a molecule receptor capable of selectively recognizing and eliminating invasive cancerous cells. CAR-T cell therapy has been highly successful in clinics, so much so, it has also been adapted for autoimmune and infectious diseases as well. While studies are relatively limited in this area, CAR-T cell approaches have produced encouraging results against infectious diseases such as HIV, hepatitis B, hepatitis C and more.

With this knowledge in mind, Derya Unutmaz, M.D., a professor at The Jackson Laboratory, and his team leveraged the same CAR-T cell method used for cancer therapies to generate T cells adept in tracking down and eliminating COVID-19 infected cells. Unutmaz’s team created not one, but several types of T cells capable of defending against the different invasion tactics of SARS-CoV-2. The team presented their findings in “Targeting SARS-CoV-2 infection through CAR-T-like bispecific T cell engagers incorporating ACE2,” published in Clinical & Translational Immunology.

The CAR- T cell strategy focuses on the surface: the Spike proteins of the SARS-CoV-2 virus and the receptor on the host cell, angiotensin-converting enzyme 2 (ACE2). Spike proteins reside on the surface of SARS-CoV-2, giving the virus its grenade-like appearance and its ability to rapidly infect its new host. The protein binds to ACE2, allowing viral RNA to quickly hijack the cell’s protein-generating system to produce a surplus of Spike on the surface of the now-infected cell.

Unutmaz and his team first developed anti-Spike and anti-ACE2 CAR-T cells that are able to target either the Spike protein or the ACE2 receptor in various types of infected cells with high specificity. The Spike-specific CAR-T cells are extremely efficient assassins, but standard CAR-T therapies take about two weeks to generate, making them impractical to administer during acute COVID-19 disease. It may be possible to adapt them to be an off-the-shelf treatment, however. With a few modifications, Spike-specific CAR-T cells also have the potential to be administered without fear of hyperinflammatory response.

While Spike-protein CAR-T cells boast robust bandwidth to eliminate infected cells, Unutmaz and his lab went one step further to provide an alternative antibody-based immunotherapy. Unutmaz engineered a bispecific antibody fused with a domain of ACE2 to activate a patient’s own T cells to destroy infected cells with surface SARS-CoV-2 Spike protein on the surface. The antibody-receptor complex triggered effective T cell activation and targeted killing of Spike+ cells. The approach has the potential to be effective at early stages of infection and, importantly, also at later stages when antibody immune defenses have been breached and T cells are needed to reduce further viral spread. 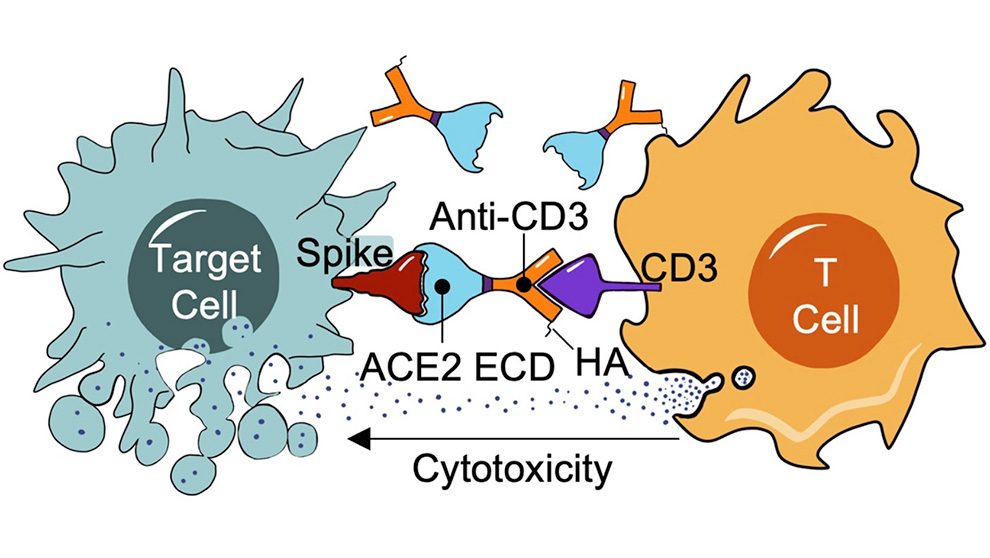 Importantly, ACE2-bispecific engineered cells exhibited efficient targeting of Spike protein across SARS-CoV-2 variants. Therapies or preventatives that target the Spike protein can lose efficiency due to immune escape mutations, but using ACE2 as the Spike recognizing part of the bispecific antibody actually increases therapy efficiency with variants that have developed more efficient ACE2 binding. The ACE2 portion also functioned as a decoy receptor and had the ability to neutralize viral entry into cells, blocking infection. The potential therapy therefore also represents a potential preventative for COVID-19. ACE2-bispecific antibodies were also effective at neutralizing SARS-CoV, the culprit of the SARS outbreak in 2003, since ACE2 is also its entry receptor. This suggests, should new SARS family members that use ACE2 emerge in future, they can also be effectively neutralized and targeted by T cells in this approach.

As seen with immunotherapy use in cancer patients, both COVID-19 CAR T-cells and ACE2-bispecifc cells come with caveats and potential side effects. Cytokine release syndrome is always a concern when using an immunotherapy. Occurring when healthy T cells begin to attack the treatment itself, an unwanted inflammatory reaction can be induced. Precautions therefore need to be addressed for both Spike-specific and ACE2-bispecific therapies.

Unutmaz projects that the effectiveness of each therapy will heavily depend on the patient’s health status. There are limitations facing the use of ACE2-bispecific technique, as it may not be the best choice for a patient who is already immunocompromised. Since the therapy depends on abundance of active T cells to eliminate COVID-19 infected cells, an already taxed immune system may not respond well. The Spike-specific CAR-T cell approach would therefore be more practical for this patient population. Nonetheless, while these potential therapies may not be feasible for all patients, they may represent effective new strategies for treating COVID-19 as well as inducing sustained immunity against SARS-CoV-2.