Thwarting a driver of cancer 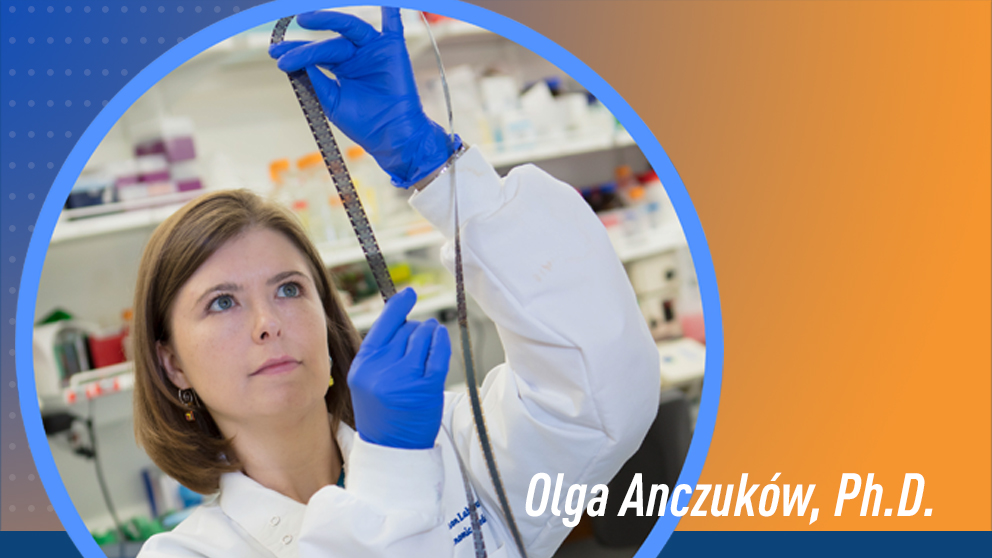 In some of the most aggressive and treatment-resistant cancers, such as triple-negative breast tumors, a gene called MYC may be hyperactive or amplified. Rogue MYC has been implicated in many kinds of human cancer, including breast, cervical, lung, colon and stomach carcinomas. Yet despites decades of research, MYC remains an undruggable target using small-molecule drugs.

Looking for new ways to target MYC, work from Jackson Laboratory (JAX) Assistant Professor  Olga Anczuków-Camarda, Ph.D.Investigates how alternative RNA splicing contributes to cancer with the goal of identifying novel clinical biomarkers and targets for precision medicine.Olga Anczuków , Ph.D., has shed new light on the role of MYC in regulating alternative RNA splicing, a process in which genes called splicing factors enable a single gene to code for multiple unique proteins, or isoforms. When this process goes awry, splicing factors can trigger cancer-related processes such as increased cell proliferation or invasion.

“We currently do not have a comprehensive understanding of which components of the splicing machinery are regulated by MYC,” Anczuków says. “So we don’t know how to accurately target MYC to correct the machinery.”

The National Cancer Institute has awarded Anczuków a five-year grant totaling $2,718,628 to determine the mechanisms that MYC sets in motion to drive tumor growth and maintenance. She says targeting the splicing machinery is a “really new approach” to deactivating defective MYC.

Using a mammary cell line with a form of MYC that can be turned on on-demand, Anczuków’s lab has already greatly expanded the number of known MYC-regulated isoforms and splicing factors. These splicing factors are also expressed at abnormally high levels in MYC-active breast tumors and can be grouped into modules. “Six of the splicing-factor modules highly correlate with MYC activity in breast tumors and cell lines, and are enriched in triple negative breast cancer,” Anczuków says.

The results of the funded research project, she says, could help inform development of therapeutic strategies for tumors driven by MYC, even if MYC itself remains an undruggable target. “We hypothesize that MYC regulates a network of splicing factors that cooperate in tumor pathogenesis,” she explains, “and that disrupting this network could provide a novel strategy to slow growth of MYC-driven tumors.”

Anczuków is collaborating with two of her JAX colleagues on the project. Albert Cheng is deploying CRISPR/Cas technology to identify the splicing factors and isoforms that are critical for MYC tumors. Jacques Banchereau, director of JAX immunological sciences, is exploring whether splicing factors offer targets for cancer immunotherapy.