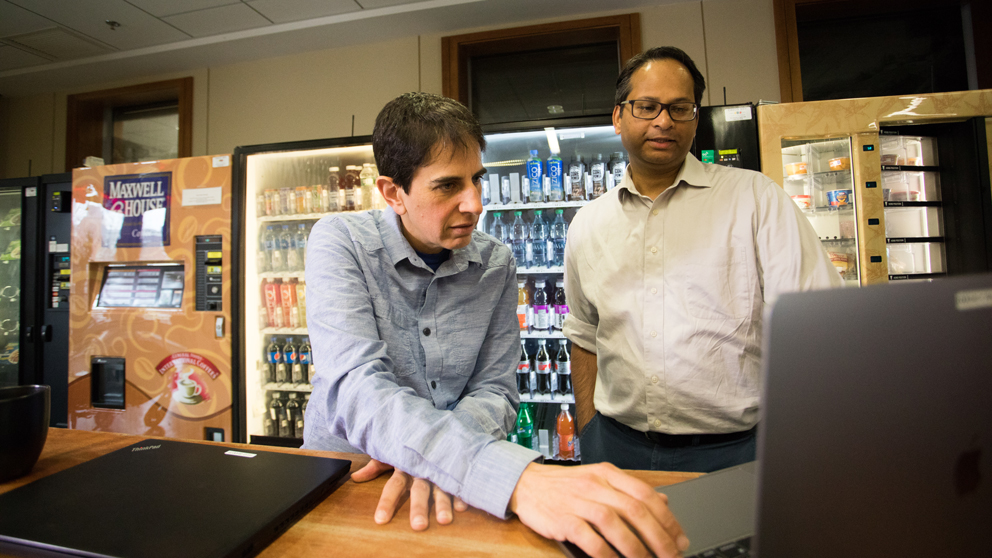 The national crisis of drug addiction and overdose deaths continues to gather momentum as it ruins lives, devastates families and erodes communities across the country.

Fueled by the ready availability of powerful prescription painkillers such as OxyContin and fentanyl, as well as illegal opiates like heroin, this public health scourge in 2017 claimed the lives of 70,237 people in the U.S., an increase of nearly 10% over the previous year.

Maine, home to The Jackson Laboratory’s (JAX) flagship campuses in Bar Harbor and Ellsworth, is hard-hit and is among states with the highest rates of overdose deaths in the nation. In 2017, the drug overdose death rate in Maine was 34.4% — eighth highest in the United States.

The work being done to look at the genetic aspects of addiction is incredibly important to help inform public policy, to determine where best to put our resources, and one day, to develop a cure.

Gordon Smith, recently named by newly elected Governor Janet Mills to lead and coordinate the state’s opioid response, expects the 2018 statistics, when they’re available, to be just as disheartening.

“This has been devastating in Maine ... particularly to our rural communities,” Smith says. “In a community of a just few thousand residents, when you lose six, eight, ten people to overdose deaths, and everyone’s related to everyone else, it’s just horrifying.”

As health experts and politicians work to contain this unfolding human disaster, JAX scientists in Bar Harbor and their colleagues in Connecticut are intensifying their efforts to shed light on the genetic and neurobiological causes of addiction, along with the impact of environmental influences.

In addition, they are reaching out to dispel public misinformation about the disease of drug addiction, also known as substance use disorder, and to build immediate support for those who suffer from it.

Elissa Chesler, Ph.D.Researches the genetics underlying behavior and identifies the biological basis for relationships among behavioral traits.Geneticist Elissa Chesler, Ph.D., has been studying the foundations of addiction since before arriving at JAX in 2009. In her lab, and in consort with addiction researchers worldwide in that means studying behavioral traits across a broad genetic mix of mice and then linking those traits to specific genetic causes.

Short Course on the Genetics of AddictionStudents will leave the course able to design and interpret genetic and genomic studies of addiction as they relate to their specific research question, and will be able to use current bioinformatics resources to identify research resources and make use of public data sources in their own research.short-course-on-the-genetics-of-addiction

Other mice, she says, are less susceptible to compulsive drug-seeking and similar behaviors.

“We’ve been able to find genes in the mice that influence drug self-administration and relate them to human genetic variants that influence drug dependence using our bioinformatics methods,” Chesler says. “We’ve worked really hard to make sure that we understand the relationships of our findings across species so we know that what we find in mice is going to be useful in the pursuit of human disease.”

Jason Bubier, Ph.D.Integrating behavioral data across species and making it computable and accessible to the research community.Research Scientist Jason Bubier, Ph.D., has been working with these genetically diverse mice to find the mechanisms of opioid overdose, in hopes of finding risk factors, and for discovery of new remedial measures for this devastating problem.

Bubier is working in collaboration with George Weinstock, Ph.D.Leverages advanced technologies to investigate infectious diseases, human and other mammalian microbiomes, and their clinical impact.George Weinstock, Ph.D., and colleagues at The Jackson Laboratory for Genomic Medicine in Connecticut to better understand the role of the gut microbiome in addiction.

Among Chesler’s long-term goals is the development of biological or behavioral therapies to prevent or manage addictions of all kinds. But that could take years, and the epidemic raging outside the walls of The Jackson Laboratory won’t wait.

Strategies already exist for helping individuals with substance use disorder, including medication, counseling, housing support, career guidance, education and more. But Chesler says ignorance, social stigma and lack of funding too often prevent those who need it from accessing that help.

In a  Toward a better understanding of behavior, biology and addictionResearch in the mouse illustrates that there are powerful genetic factors influencing the biological mechanisms of addiction. letter to the Ellsworth American, Chesler argued for improved access to comprehensive treatment for individuals with substance use disorder. And she called for society to examine its assumptions and judgments about people who suffer from this disease.

“Although much is known about the biology of addiction and more is being discovered all the time, society’s response … has been one of stigmatization, compounding problems and making access to effective treatment difficult,” she wrote.

“A better, more widespread understanding of both the behavior and biology of addiction can help to guide these efforts toward prevention and treatment, to reduce the numbers of people progressing to, and living with, full-blown addiction.” 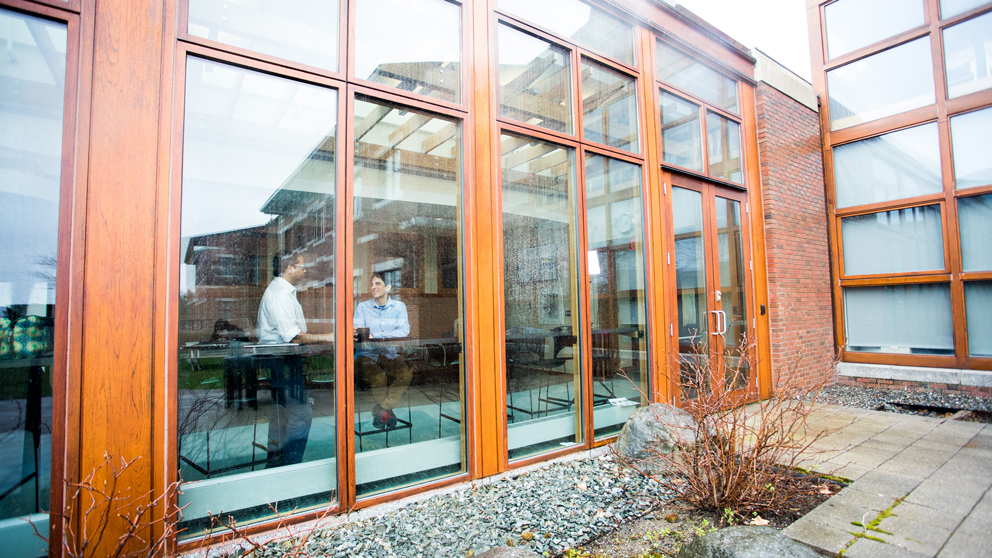 Chesler’s colleague  Vivek Kumar, Ph.D.Understand the genetic and neurobiological basis of complex behaviors that are important in psychiatric conditions such as addiction, ADHD, and depression using genomic, neural circuit, and computational tools.Vivek Kumar, Ph.D., also studies the genetics and neuroscience of addiction. His lab is exploring the reasons why some mice have a more pronounced response than others to the stimulating effects of cocaine.

Kumar’s lab has also identified a specific gene that appears to regulate addictive responses generally, not only to substances such as opiates and stimulants but, potentially, he says, to nicotine, alcohol and even food.

Like Chelser, Kumar aims to identify genes and related molecular pathways that eventually can be targeted for the treatment and prevention of substance use disorder.

But the worsening epidemic has compelled Kumar to take his knowledge and his convictions into the community. The death by overdose of a young woman not far from where he lives was the impetus for his delivering a recent TEDx talk in Portland and a presentation at the annual Maine Science Festival in Bangor.  He also serves on the board of directors at the Acadia Family Center, a nonprofit addiction treatment and family counseling facility on Mount Desert Island.

“There’s still a huge stigma attached to addiction and people who are suffering with a substance use disorder. I feel that we, as scientists, can contribute to that debate by talking about the neuroscience — the genetics — of this disease,” he says. “So I decided to go out there and talk about what we study in the laboratory to as many people as possible, and the message I always try and deliver is that addiction is a medical condition.”

Chesler is also working hard in the community to make a more immediate impact on addiction. She and her colleagues are working with the JAX education team to develop new and improved interactive educational programs. These programs are used in high schools in Maine to teach students about the biological and behavioral basis of addiction toward a more rapid recognition of problematic drug use.

As career scientists, both Chesler and Kumar are committed to continuing their vital work at JAX. But as compassionate human beings and engaged members of the Maine community, they hope their voices will also help destigmatize this disease and expand immediate access to comprehensive care and prevention strategies.

Stepping up the response

At the federal level, support is growing for a more effective approach to countering the nation’s opioid crisis. In recent votes, lawmakers have supported legislation to tighten law enforcement, expand access to treatment, improve prescription monitoring and heighten social awareness of the problem.

Maine’s two U.S. senators, Republican Susan Collins and Independent Angus King, recently teamed up to announce a $225,000 grant for The Jackson Lab from the National Institute on Drug Abuse, a branch of the NIH.

With this funding, Kumar is using computer vision technology to study the relationship between drug intake and sleep states in lab mice.

“The important work being done at The Jackson Laboratory is making great strides to conquer an addiction that affects far too many families in Maine and across the country,” King and Collins said in a joint statement.  “We welcome this continued funding to help support JAX’s efforts to understand, treat and prevent drug addiction.”

Smith brings unique expertise to his new position. For the past 25 years, he led the Maine Medical Association, representing Maine doctors on policy issues before the legislature. And it was during his tenure there that the opioid crisis began to unfold in Maine.

“I recall doing my first opioid talk in Presque Isle in 2002,” he says. “We were just beginning to see OxyContin in Washington and Aroostook counties, seeing what a problem it was becoming.” That problem was fueled by a heightened concern in the medical community with providing adequate pain control and bolstered by false reassurances from the pharmaceutical industry that the powerful new generation of painkillers had a low potential for abuse and addiction.

The early over-prescription, diversion and abuse of pain medications later were compounded by a flood of inexpensive heroin into Maine’s poorest and most rural areas, and now worsened by the ready availability of the synthetic painkiller fentanyl. The vast majority of Maine’s overdose deaths in 2017 were caused by at least one opioid, including both prescription pharmaceuticals and illegal street drugs.

Smith says the Mills administration has established the opioid crisis as a top priority and is taking steps to improve and coordinate the statewide response across all agencies. This includes expanding Medicaid eligibility to pay for more low-income individuals to receive care, though addiction cuts across all socioeconomic levels. It means increasing access to the overdose-reversing drug Naloxone and increasing the number and capacity of treatment providers — including, for many users, lifetime treatment with the therapeutic substitute suboxone. It includes better law enforcement and emergency care, as well as residential detox programs, treatment in jails and prisons, counseling and mental health services, peer support, safe housing, employment counseling and more.

Even when the tide eventually turns, when the overdose deaths decrease and the number of Mainers suffering directly from addiction begins to wane, Smith says, there will be ongoing need to invest in education, health care and social services — particularly for infants born to mothers who use opioids while pregnant, and for the adoptive parents and extended family members who step in to raise these children when the biological parents are incapable.

“We are not going to get out of this cheaply,” Smith says. And while the need is great to address all these fronts at once, Smith said ongoing research toward long-term solutions, like that being conducted at JAX, is essential.

“There is still so much we don’t know about this disease,” he said. “The work being done to look at the genetic aspects of addiction is incredibly important to help inform public policy, to determine where best to put our resources, and one day, to develop a cure.”