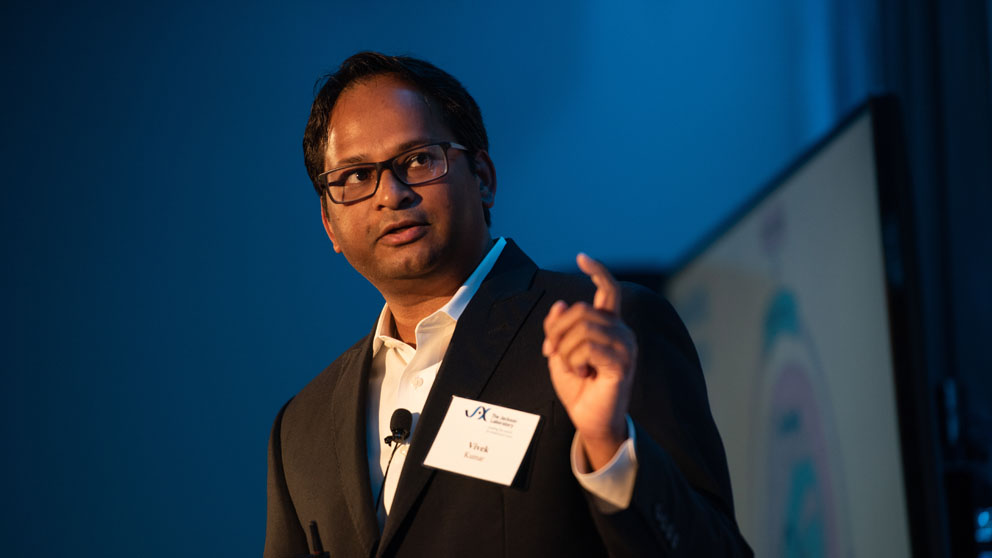 Why are certain people more vulnerable to addiction than others?

This is the question that Assistant Professor Vivek Kumar, Ph.D., is working to answer every single day, through his research on the genetics behind behavioral abnormalities like addiction.

In a TED-style talk at the Cumberland Club in Portland, ME, Kumar shared how he and his laboratory are using mouse models to research the individual differences that make people vulnerable to addiction.

“Most of us are going to use a drug with some abuse liability, but only a few of us are going to escalate drug use and become addicts,” said Kumar. “And the question that geneticists and researchers are trying to answer is, why are certain people more vulnerable than others?”

Ultimately, Kumar wants to discover how certain genetic variants change brain structure, and therefore alter brain functioning – and how these variants can be targeted for treatment.

However, an addict who may have a similar relapse and reinitiate drug use will often be seen as having “fallen off the wagon.” The treatment plan of 10 years – despite a decade of having the chronic condition under control - may be considered a failure. But if we think of addiction as a medical condition, said Kumar, we should consider 10 years of successful treatment as an accomplishment, adjust medication after a relapse, and reinitiate the treatment.

“I feel if we understand addiction as a neurobiological disease, just like many other mental illnesses or chronic diseases, we will take the stigma out of studying and treating addicts,” said Kumar.

Because of all of these nuanced differences, personalized treatments for addiction are key. Someone who has a cortical dysfunction, resulting in multiple relapses, may require a very different type of therapy and medication than someone who has a basal ganglia deficit, for example.

“In fact, if you really want to treat someone well, you’ve got to figure out which part of this cycle is weakest in this individual, and you’ve got to then treat that,” said Kumar.

“Everyone’s addiction needs to have specific treatments. It has to be personalized. The goal of our work is to give targets that can allow stratification of patients to give better treatment.”

One Nucleotide, One Major Change

Kumar’s team found out that one nucleotide – out of 2.8 billion - in a single gene caused a difference in cocaine response between two groups of mice that were otherwise identical. One group was less sensitive to cocaine. The nervous systems of the mice in the two groups responded to the drugs differently, and their nervous systems even changed differently given the exact same dose of a drug.

When the researchers swapped the nucleotides of the mice, the change completely reversed their responses to drugs.

Kumar and his colleagues were then able to share these findings, and the new mouse models, with colleagues across the nation who study alcohol addiction, food binging, and nicotine addiction.  By sharing these mouse resources, other researchers have shown that this gene also regulates addiction phenotypes seen with these drugs.

It’s predicted that there are hundreds of genes that regulate the process of addiction, and genetic studies in humans scientists have only identified a handful of those genes thus far.

Using the mouse as tool for discovery can be a powerful resource. Kumar’s lab has leveraged data from JAX to discover cluster of 50 novel genes with behavioral phenotypes that are  predictive of addiction. He is currently in the process of testing these genes for addiction.

There’s so much more to discover, and the Kumar Lab has only scratched the surface.