Oncoimmunology and the next steps forward for cancer immunotherapy 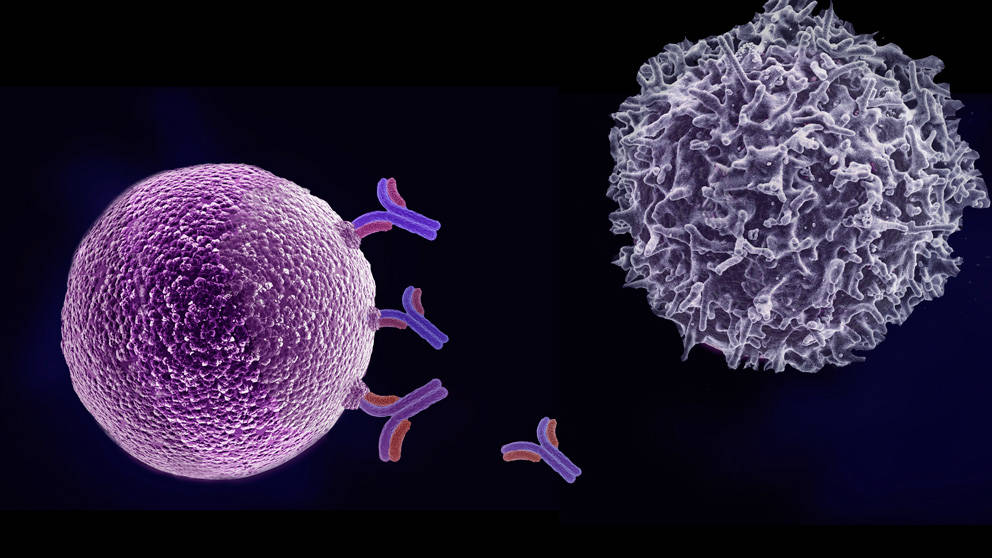 One of the most exciting fields in all of biomedical research right now is oncoimmunology. The premise has been around for decades, and on the surface it is simple: Get a cancer patient’s immune system to recognize cancer cells as foreign, as they do a virus or bacterium, and mount a response to kill them.

Indeed, recent advances in both cancer and immunology research have led to some spectacular successes in the field, with certain aggressive cancers stopped in their tracks or even eliminated by a provoked or unleashed immune response. But cancer is a difficult foe, and immunology is far from simple, so it’s been a difficult feat to achieve. And, as JAX Professor A. Karolina Palucka and co-author Lisa Coussens document in a review paper in Cell, much work remains to make the treatments more precise and more effective.

“The Basis of Oncoimmunology” presents the complex interplay between cancer cells and the immune system, and how those interactions can be manipulated to stimulate and strengthen a cancer-killing response. There are many factors that determine whether cancer cells are recognized and eliminated in early stages before they progress to disease. Cancers that escape detection not only fly under the immune system radar, they can co-opt certain checks and balances inherent in immunity—the immune response is heavily regulated to avoid autoimmunity and other potential consequences—and actually leverage them for continued survival and growth. For example, chronic inflammation, a hallmark of many cancers, has been shown to involve an immune system response that becomes altered to support cancer expansion instead of eliminating it. The tumor, in essence, creates a micro-environment within the surrounding tissue that shields it from normal immune system function.

To use immunology to kill cancer after it has been diagnosed, then, involves “finding” cancerous cells after they’ve adapted to evade immune detection and re-configuring the immune response to kill those cells instead of ignoring or even supporting them. Historically, this has been achieved in one of two ways, both of which use immune cells known as T cells as the “drug.” In the first scenario, antibodies are produced that identify unique tumor characteristics and stimulate what are known as “cytotoxic” (cell killing) T cells to eliminate tumor cells. The other method is called immune checkpoint blockade because it eliminates signals that block T-cell function. It basically takes away natural checks and balances in the immune system to unleash our natural T cell population on the cancer cells. Blocking multiple checkpoints instead of just one also leads to improved response for some cancers.  Sometimes a patient’s T cell population also needs to be expanded to generate sufficient immune response.

As dramatic as some patient responses have been to these therapies, however, resistance to therapy is still a significant problem. Therefore, a key research area moving forward involves resolving natural and acquired resistance to immune checkpoint blockade therapies. One promising avenue involves cancer vaccines, in which antigens based on cancer-specific mutations and peptides are used to prime a patient’s T cell population. As a result, the T cells are more likely to mount a vigorous response when checkpoint therapy removes the natural obstacles to their function. Better individual patient assessment is also important. Cancers are well known for being unique to each patient, but so is their immune system composition and localization. The ability to stratify patients based on a coordinated assessment of their immune systems—a so-called Immunoscore—has the potential to help make therapy choice and administration more precise.

Oncoimmunology holds great promise for improving cancer therapy, but a lot more work is needed. The authors caution: “Indeed, as we rediscover and refine the fundamental principles of tumor immunology, it is increasingly clear that curing cancer might not be a realistic goal. Rather, aiming for a continuum of treatment cycles designed and based on mechanistic in vivo studies and in-depth analysis of each patient’s tumor will be necessary for optimizing outcomes.” But for some patients today, and hopefully many more in the future, those optimized outcomes surpass what had been possible, and research in the field will continue to yield vital progress.