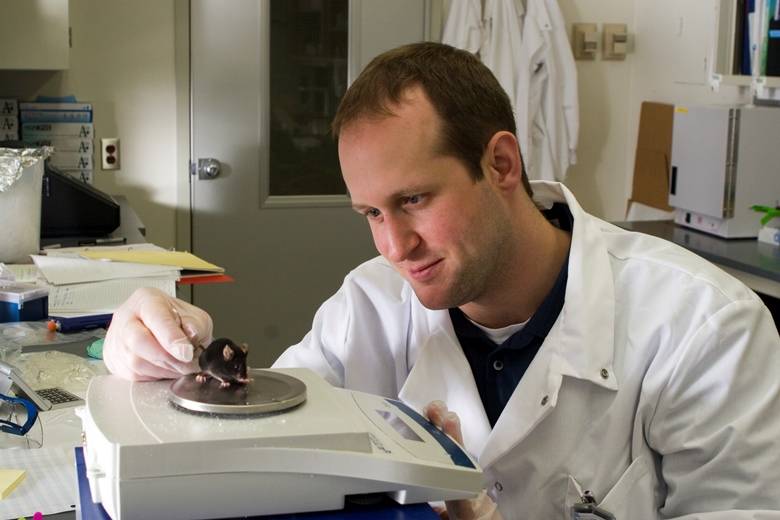 With the recent buzz surrounding the development of next-generation human infectious disease models based on “humanized” immunodeficient mice, such as JAX’s NSG (005557), which are engrafted with human hematopoietic stem cells, it’s easy to overlook the fact that some old-school inbred mice have been widely used for studying infectious disease for more than eighty years.

As early as in the 1920s, it was reported that mice could be bred to show resistance to infectious pathogens (see, for example, Webster LT 1924). Following the establishment of today’s most popular inbred mice, researchers around the world soon found that some strains were susceptible to infection by specific pathogens whereas others strains were resistant. Some examples of the pathogens capable of infecting both mice and humans include deadly bacteria such as Bacillus anthracis (Anthrax), Legionella pneumophila, Listeria monocytogenes, Mycobacterium tuberculosis and viruses like Influenza, West Nile, and Cytomegalovirus. Forward genetic studies comparing the genomes of inbred strains that differ in their sensitivities to infection by specific pathogens have led to the discovery of many genes whose roles explain why some hosts are susceptible to those pathogens and why some pathogens persist following infection both in mice and in humans. For an excellent review on the history and value contributed by inbred strains in forward genetic studies to understanding the biology of infectious diseases, see Vidal SM et al. 2008.

Where can I learn more about the susceptibility of specific inbred strains to pathogen infections?

Online resources regarding the susceptibilities of inbred strains to infection by specific pathogens are available and include:

Inbreeding has its advantages in infectious disease research

“Humanized” immunocompromised mice certainly are powerful new resources in human infectious disease research and are providing researchers, for the first time, access to mouse models for understanding and treating certain infectious diseases due to pathogens, such as HlV, that have devastating effects in humans but normally do not infect mice. But if you are studying pathogens that infect both mice and humans, inbred strains do have certain advantages:

1. Economical – Inbred mice are considerably less expensive than mutant humanized models.
2. Fully developed immune systems – Inbred mice are immunocompetent, and, thus, allow for the study of infectious diseases and the compounds designed to treat them within the dynamics of fully functional immune systems.
3. Genetically stable and homogenous resources – By definition, inbred strains are genetically homogeneous (as genetically homogenous as you can get, anyway), and therefore, mouse-to-mouse variation is limited. In addition, most of the most popular inbred strains available from JAX are maintained as part of our unique and patented Genetic Stability Program (GSP). GSP is designed to limit the occurrence of genetic drift and ensures that the mice that you receive from JAX today will be the same mice that you receive in years to come, with little variation.
4· Readily available – Most JAX inbred strains are maintained as large colonies, and large cohorts of aged-matched animals generally are available without significant waiting times.

I expect that even in the wake of the exciting progress in infectious disease research using humanized NSG mice, studies with classic inbred mice will continue to contribute to the efforts to understand infectious diseases and to the design of both preventive and curative treatments.