The rapidly increasing variety of complicated and sophisticated knockout, knockin, and other mutant mouse models of human disease is mind boggling. I and other Technical Information Scientists (TIS) are regularly contacted by researchers struggling with, or needing advice on, generating compound mutant mice. We are frequently asked about optimal breeding schemes, genetic backgrounds, appropriate controls, etc. Therefore, I have put together a guide to help you with breeding schemes for the most common situations. This post will focus on generating double knockout/mutant mouse strains.

There are four preliminary steps you should undertake before breeding any mice:

1) Identify which chromosomes harbor the two genes. You can find this information on the Mouse Genome Informatics (MGI) website. If both genes are on the same chromosome, it may be very difficult (or impossible) to generate the double mutant you want. I will further discuss such situations in an upcoming post.

2) Ensure that your genotyping assays are specific. Before generating your double mutant, make sure you can genotype for the wild-type and mutant alleles of each gene. For example, run the primers for gene A against the gene A and B knockout strains; do the same with the gene B primers. Your gene A assay should type gene B mutant mice as wild-type for gene A, and your gene B assay should type gene A mutant mice as wild-type for gene B. To facilitate identifying the mutant allele, many genotyping assays use two primers specific for the neomycin resistance cassette. Watch out: Because most knockout alleles have a neomycin resistance cassette, such assays may not be able to genotype double knockouts. If one or both of your assays are not specific, you may need to redesign them.

3) Check for fertility, lethality or increased mortality. Again, you can use MGI to find the expected phenotypes for knockout mice. If either of your mutations affects fertility or survival, you will need to adjust your mating schemes accordingly. Caution: Even if homozygotes for both mutations are viable and fertile, don’t assume that double homozygotes will be. Any time you intercross two different strains, you’re running an experiment, and you can’t predict the outcome. To find out, you simply have to run the experiment!

Once you complete the preliminary steps, execute the first cross. Simply mate the homozygotes for knockout gene A to homozygotes for knockout gene B. As the Punnett square in Figure 1 shows, all of the progeny from this cross will be heterozygous for both knockout alleles. To be consistent with your genetics textbooks, the wild-type (dominant) alleles are capitalized, and the knockout (recessive) alleles are in lower case.In the following breeding schemes, I’m assuming the least complicated situation: Both genes are on different autosomes, both knockouts are on the same inbred background, and both knockouts are viable and fertile as homozygotes. I will discuss more complicated situations in future posts. 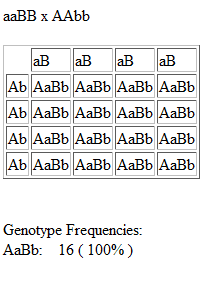 You can find Punnett square calculators online. They can help you plan your crosses – or you might simply love Punnett squares. Here are a few useful links:

From this point, you can proceed in one of two ways:

The most common practice is to mate the double heterozygotes together (AaBb x AaBb). Theoretically, one out of 16 progeny (6.25%) will be homozygous for both knockouts (aabb; see Figure 2). Be aware that it will take a lot of mice to get enough double homozygotes to build your colony. 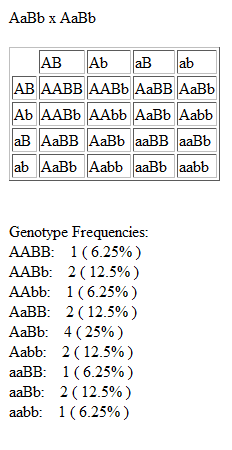 Alternatively, you could cross the double heterozygotes (AaBb) back to one of the homozygous knockout parents (e.g. aaBB). About 25% of the offspring will be homozygous for the gene A knockout allele and heterozygous for the gene B knockout allele (aaBb; see left hand Punnett square in Figure 3). Then, cross these mice together. About 25% of the offspring will be double homozygous knockouts (aabb; see right hand Punnett square in Figure 3). Although the second option will take an extra generation of breeding, you may end up producing and genotyping fewer mice overall. 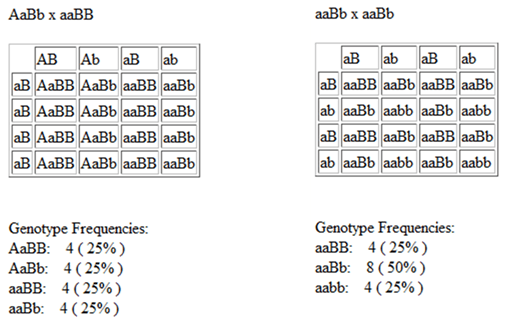 Whew! We’re done. With two to three rounds of breeding (depending on the approach taken), we have successfully generated double knockout mice. Let the experimenting continue!