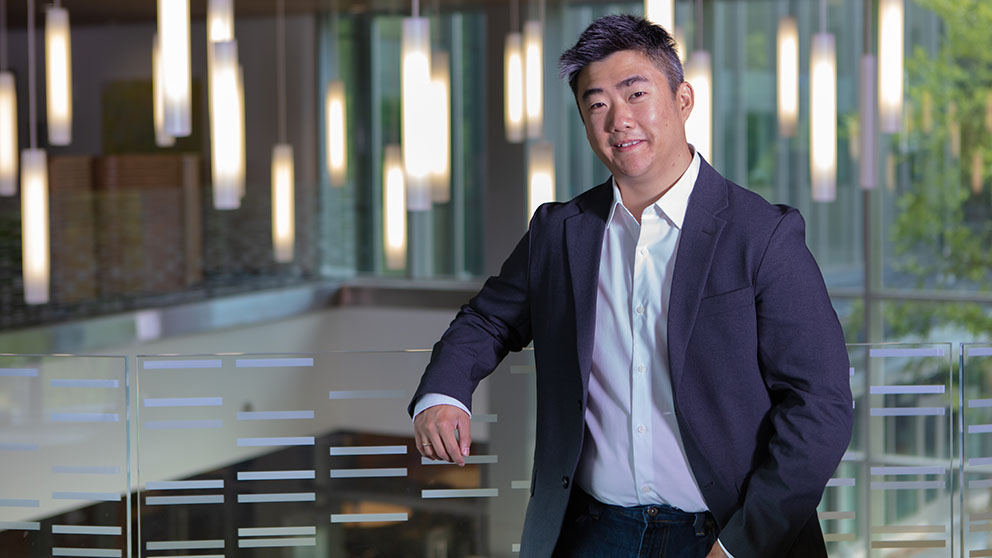 Eric Wang describes leukemia as “a very aggressive hematologic malignancy,” a cancer of the blood-forming tissues in the bone marrow and lymphatic system. Potentially deadly, he says, “many patients with leukemia, such as acute myeloid leukemia develop resistance to the few therapies available to treat the disease.”

Wang says his goal in his new role as Jackson Laboratory assistant professor is to understand how leukemia cells develop resistance, and to devise strategies to overcome therapy resistance. “Many leukemia patients have very limited therapeutic options, so any new treatments we can develop will be helpful.”

Many leukemia patients have very limited therapeutic options, so any new treatments we can develop will be helpful.

One major area of Wang’s research focuses on how cancer cells may thwart the effectiveness of therapies by hijacking a process known as RNA splicing, which is critical process in cells for making mRNA which in turn is used to instruct how protein are created. “My work has demonstrated that in some cases, if you manipulate certain splicing factors, this can control drug response to leukemia cells.”

And of course, he adds, “we want to study leukemia in mice.” His lab will focus on generating new mouse models of leukemia, focusing on genes that may be involved in treatment resistance.

A true gem of a researcher

Wang earned his Ph.D. at the Sackler Institute of Biomedical Science at New York University School of Medicine, and joins the JAX faculty from a postdoctoral fellowship in the laboratory of Omar Abdel-Wahab, director of Memorial Sloan Kettering’s Center for Hematologic Malignancies.

Abdel-Wahab describes Wang as “a true gem.” He says, “It has been inspiring for me to watch Eric’s growth as a scientist. From his earliest involvement in research at Cold Spring Harbor laboratories to his time as a postdoctoral fellow at Memorial Sloan Kettering Cancer Center, he has been consistently responsible for amazing discoveries in our understanding of leukemia development and generation of new leukemia treatments. I am so excited to see what holds for his bright future as an independent researcher at The Jackson Laboratory.”

Wang grew up on Long Island, New York, and he says he was in his junior year studying biology at SUNY Farmingdale when a customer at his family’s bagel business “came up to my mom and asked, ‘Does Eric want to work in the lab to gain some experience?’” Wang took the opportunity to spend the next two summers conducting research at the Feinstein Institute for Medical Research.

A focus on cancer research

Wang says the lab experience sparked his passion for research, and after receiving his BS degree, he joined the laboratory of Christopher R. Vakoc, a professor and Cancer Center Program co-leader at Cold Spring Harbor Laboratory, which is located near the north shore of Long Island.“That's when I knew I really wanted to do cancer research,” Wang says.

“I had the enormous pleasure of hiring Eric as a technician and as the first member of my lab,” Vakoc says, “and he rapidly grew into an extraordinary scientist long before he earned a Ph.D. Leading a research project came very naturally to Eric even at a young age, owing to his remarkable enthusiasm and thoughtfulness when performing experiments. I am not surprised at all that Eric is now an assistant professor and I look forward to following his continued success at The Jackson Laboratory.”

Wang says there were several reasons he joined the JAX Genomic Medicine campus in Farmington, Conn. “Even during the interview process, I met several potential collaborators that would help advance my research,” he says. “I was also attracted by how diverse the research programs are at JAX, beyond just cancer. I think it’s great to benefit from researchers with diverse expertise and backgrounds.”