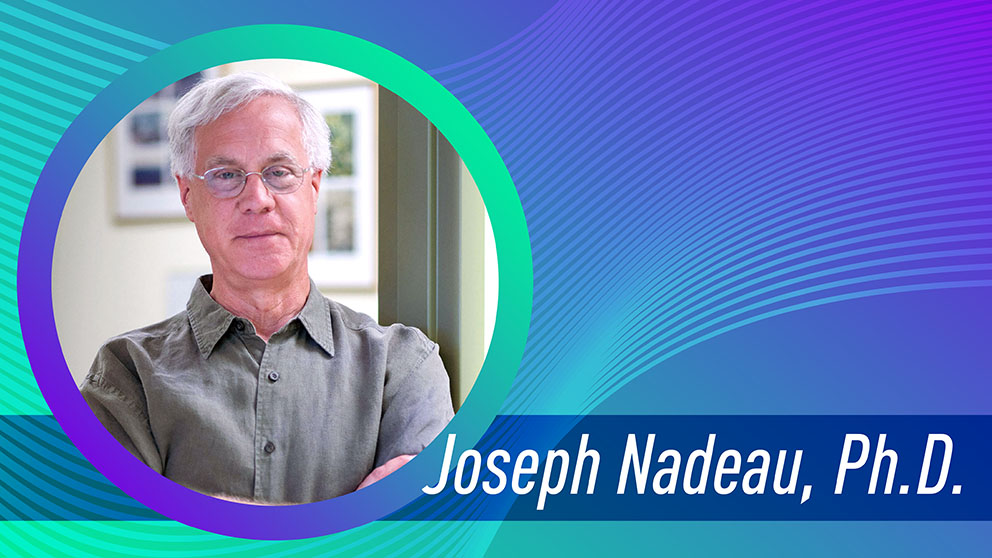 A conversation with Joseph Nadeau, Ph.D., Summer Student Class of 1972 and Faculty Scientist III at MaineHealth Institute for Research in Scarborough, Maine.

How did you first learn about JAX, and what piqued your interest to apply to the Summer Student Program?

A physician and family friend suggested I might be interested in the summer research program at JAX. So, I sent a letter to JAX inquiring about a summer position. The reply was that the summer groundskeeping jobs were filled and asked if I might be interested in a summer research position instead. A big lesson about writing a proper letter of inquiry.  I applied, Roy Stevens accepted my application, and everything changed dramatically after that summer.

What was that first summer like, and what was your research project focused on?

For a kid from Presque Isle, where nothing similar could be imagined, that summer was simply transformative. I could not believe that someone could build a career on ideas (imagination and creativity) and hard work. I abandoned plans to go to medical school, choosing instead a life of research. Not a regret! I remember the project, with Marion Child, studying the effects of cadmium (a heavy metal) on testicular cancer.

What was something that stood out to you in your first summer and what lessons did you take away from your experience?

The exceptional professionalism of the research staff – Roy, Tibby Russell, George Snell, Eva Eicher, Doug Coleman, Ben Taylor, Wes Whitten, Don Bailey, Pete Hoppe, Earl and Margaret Green, and so many others. I also remember summer visitors – Mary Lyon, Davor Solter, Dorothea Bennett, and so many others. All ‘old school’ – smart people asking big questions and taking time to discuss ideas, new papers, and conference reports with enthusiasm and collegiality. Mentors, taking time to talk seriously with students. Good people from all over the world with different backgrounds, but with shared interests in genetics and development. They all made a huge impression. They all were (and are) role models. It is difficult to express now all I learned from them and the impact they all continue to have. Research has changed, and the people doing research have changed. We don’t take the time we once did to talk science, to brainstorm, to think big and dissect ideas. I miss those times, I miss those inspirations, I miss that culture.

I learned to think big, collaborate, and strive to make a difference.

An important lesson from that time – a commitment to do what I can to contribute to the research community while doing my own work. I’ve started three research journals, helped found a society, organized many conferences and workshops (one of those conferences is now in its 14th iteration and another in its 34th). I’ve served in various administrative and leadership positions as a way of contributing to the community. And I’ve spent lots of good time mentoring students, fellows, and faculty. The target was always 50% of my time devoted to community work. I’ve been told I am naïve to be this way. But this is one of the big lessons from Roy Stevens and others at JAX, and I think I respect them by doing these things now.

I learned to think big, collaborate, and strive to make a difference.

That summer clearly made a lasting impression as your time with JAX did not end with the Summer Student Program. What other roles have you had at JAX?

I returned the following summer to work as a research assistant with Roy Stevens. That experience reinforced my first experience. After doctoral work in population genetics at Boston University and postdoctoral work at a Max Planck Institute (Tubingen, Germany), I returned for a brief postdoc with Eva Eicher at JAX. Interestingly, I now chair the Scientific Advisory Board for a Max Planck Institute (Berlin). JAX then offered a faculty position, where I remained for 14 years, rising to senior staff scientist. In addition to my own research during that time, along with Janan Eppig, Larry Mobratten and Andy Reiner, we started the Mouse Genome Informatics program. Then with Martin Ringwald and Joel Richardson, we started the Mouse Gene Expression Database. The programs grew rapidly from a small grant with several people to a large grant and many staff. Twice the Smithsonian Museum recognized our work as part of the Innovation in Information Technology Program – copies of our software were deposited into the Museum’s permanent collection. The Mouse Genome Database served an instrumental role in the early days of the Human Genome Project in engaging the mouse community to systematically organize genetics information as the foundation for physical maps and sequences of the mouse genome, to identify corresponding segments of the human genome, and to transfer information from map-rich to map-poor species. With Ed Birkenmeier we started an Experimental Genetics Summer Course, which continues to this day, and with John Eppig a series of Developmental Genetics Conferences were organized. Both attracted leading researchers as teachers and lecturers. Finally, while I was at JAX I was lucky to be a member of the MIT Genome Center, and later a coauthor on the genome sequencing papers for humans and mice.

What has your research focus been throughout your career, and what role do you currently hold?

My research career has encompassed the following subject areas:

Unusual modes of inheritance. My focuses in this field are exceptions to Mendelian inheritance, transgenerational inheritance, and non-genetic and non-environmental variation. Exceptions to Mendelian inheritance (transmission distortion, non-random fertilization) provide insight into the fundamental genetic and molecular mechanisms that underlie Mendelian inheritance. Transgenerational inheritance* is where genetic variants in ancestral generations affect current phenotypes, such as risk for testicular cancer and diet-induced obesity, challenging the conventional understanding that the genetic variants that determine disease risk are present in affected individuals instead of in previous generations. (*A prestigious NIH Pioneer Award supported some of this work.) Non-genetic and non-environmental variation** arises from random epigenetic changes during early development and then endures through life. This leads to substantial phenotypic variation and disease risk even among genetically identical individuals in shared environments. Our work shows that genes and environment together account for only 50% of phenotypic variation. (**A prestigious NIH Transformational Research Award is supporting this work, which is in collaboration with Andrew Pospisilik, Van Andel Institute, Grand Rapids.) Finally, we recently discovered that fertilization is not simply a random combination of eggs and sperm, but is highly non-random, depending instead on their genetic content.

The faculty and staff at JAX continue to be remarkable; my debt is immeasurable.

Genome organization and evolution. One of my most important papers was published with Ben Taylor (PNAS 1984), who I first met as a summer student.  This paper involved the first hypothesis-based quantitative analysis of mammalian genome organization and evolution. The paper helped establish the field of comparative genomics, was recognized as one of the most important discoveries in mouse genetics in the last century (E. Pennisi, Science 2000), and has been described as ‘visionary’, ‘prophetic’, and ‘landmark’ (P. Pevzner, PNAS 2003; D. Sankoff, Bioinformatics 2004). Ben’s insights and contributions were incredibly important – one of my most memorable collaborations.

Genetics of complex traits. With Eric Lander, we pioneered a new way to study the genetics of complex traits. This novel resource used simplicity to solve complexity – a genetic resource that even non-geneticists could readily use. With these strains, we and others discovered more genes controlling complex traits than any other mouse genetic resource. They were also instrumental for studying gene interactions, transgenerational inheritance, and non-genetic non-environmental variation in unprecedented ways.

What is something that you’d like the JAX community to know about you?

The faculty and staff at JAX continue to be remarkable; my debt is immeasurable.

A conversation with Brianna Gurdon, Summer Student Class of 2018 and Ph.D. candidate in JAX’s Kaczorowski lab

Markert is from the Summer Student Class of 1970 and Professor of Pediatrics and Immunology at Duke University.

A conversation with Tucker Taft, Director of Programming Language Research at AdaCore in Lexington, Mass., and Summer Student Class of 1969.