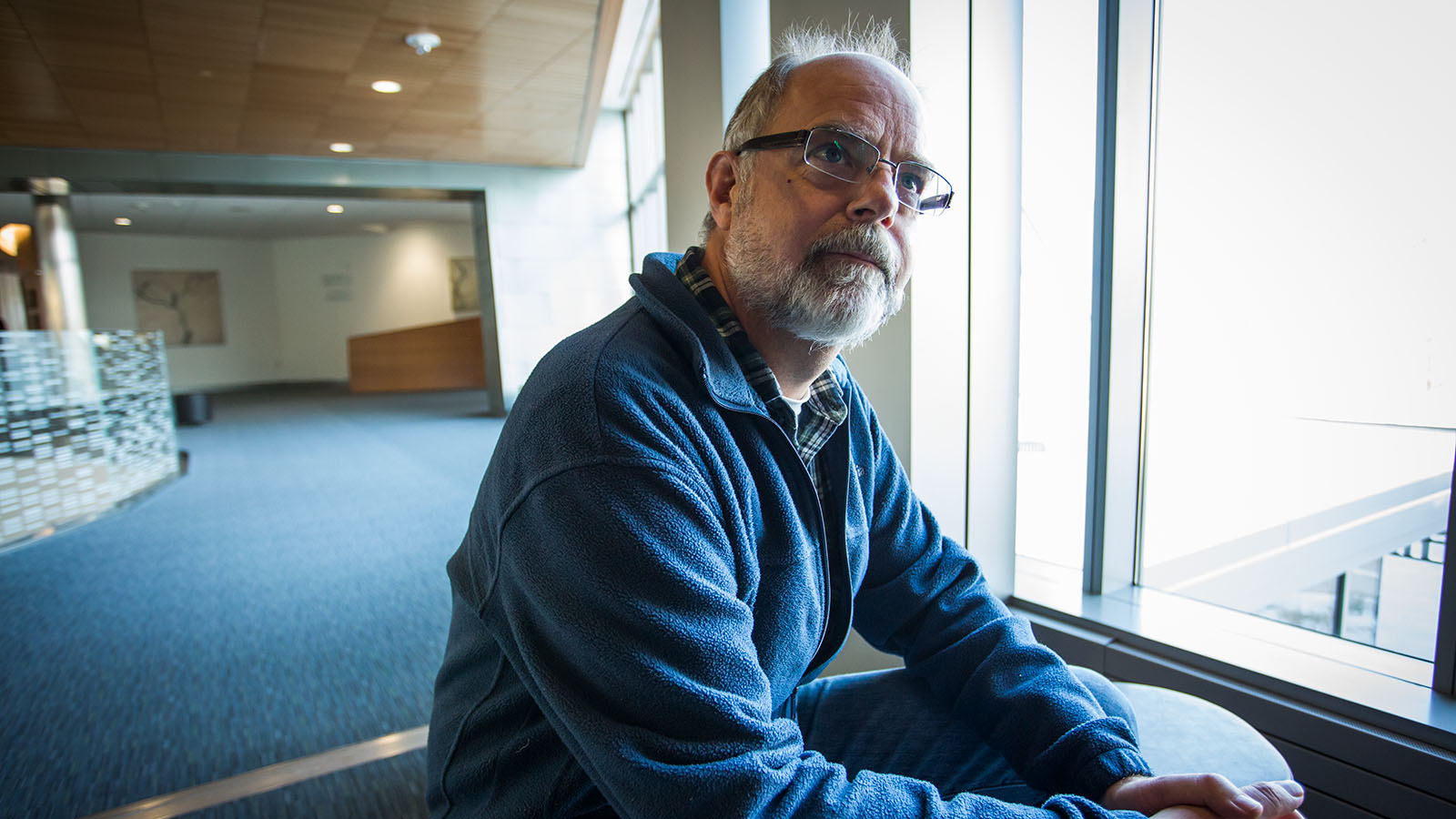 Studying these diseases is also fraught with challenges for researchers and clinicians. While certain genetic risk factors have been associated with dementias, there is no specific gene that directly causes them, yet hundreds of genes, as well as various environmental factors, have been implicated. (A rare, early-onset form of Alzheimer’s does have a clear genetic component.) That means that to date there is no genetic test that can signal the presence of disease before symptoms of dementia develop late in life; in fact, Alzheimer’s can be definitively diagnosed only after a patient’s death.

We want the scientific community to know about and take advantage of these new research resources.

A new approach for Alzheimer's treatments

A Jackson Laboratory team led by Bill Skarnes, Ph.D.Bill's laboratory is currently exploiting new genome-editing technology to study gene function and to model disease in human stem cells.Bill Skarnes , Ph.D., professor and director of cellular engineering, has contracted with the National Institutes of Health to generate a collection of engineered iPSC brain cell lines for the Alzheimer’s research community. Skarnes’ collaborators in the iPSC Neurodegeneration Initiative project are Mark Cookson, Ph.D., senior investigator in the National Institute on Aging’s Laboratory of Neurogenetics, and Michael E. Ward, M.D., Ph.D., investigator in the Inherited Neurodegenerative Diseases Unit of the National Institute of Neurological Disorders and Stroke.

Skarnes and the Cellular Engineering laboratory at The Jackson Laboratory for Genomic Medicine in Farmington, Conn., recently established improved techniques for introducing single -nucleotide variants in human iPSCs via CRISPR/Cas9. Ward was on a research team that achieved the first successful merger of stem cell-derived cell types and CRISPR screening technologies.

“We are delighted to be part of this groundbreaking NIH-funded effort to establish a community resource of human disease models of neurodegenerative disease,” Skarnes says. He adds that by engineering disease-causing mutations in a set of genetically diverse iPS cells, “the project is designed to ensure reproducibility of data across laboratories and to explore the effect of natural variation in dementia.”

Unlike embryonic stem cells, iPSCs are derived from adult human cells. Use of human iPSCs in dementia research has revolutionized the way scientists study disease biology, Ward says. iPSCs “can be turned into disease-relevant cells such as nerve cells, allowing researchers to study disease biology in the very types of cells that become affected. And with the development of CRISPR/Cas9 techniques, it is now possible to genetically manipulate iPSCs so that the effects of disease-related mutations can be studied.

A recent expert review in the Nature journal Molecular Psychiatry noted, “While still in their relative infancy, these developing iPSC-based technologies hold considerable promise to push forward efforts to combat Alzheimer’s disease and other neurodegenerative disorders.”

Aiding the community of disease research

However, the process of making iPSCs from patients with these diseases, and the subsequent genetic engineering of the cell lines, is “difficult, expensive and time consuming,” says Ward. “This has substantially hindered the development and uptake of genetic iPSC models by the research community.”

Cookson, a cell biologist who studies the underlying pathways that lead to Parkinson’s disease and related disorders, explains that a typical iPSC project would involve reverting a cell line from a patient with a given mutation back to the wild-type (or “normal”) sequence, to compare the two. “That is valid,” Cookson says, “but comparison between different mutations is challenging due to differing cell backgrounds. With the iPSC Neurodegeneration Initiative project, anyone can request the complementary line for an experiment knowing the background has been standardized, enabling cross comparisons.”

With JAX, Ward says, “iNDI is democratizing iPSC-based research by centrally developing and validating hundreds of iPSC lines that have been genetically engineered to harbor mutations associated with dementia. Researchers worldwide will be able to request these lines, at a fraction of the time, effort and cost typically associated with generating such lines, thus greatly accelerating research and broadening the numbers of researchers able to use iPSCs as disease models.”

Under two five-year NIH contracts (totaling $6,949,000 and $6,323,255, respectively), the team is using CRISPR/Cas9 gene editing technology to introduce a single-nucleotide variant of a dementia-related gene into each of the iPSC lines. The project will produce hundreds of engineered cell lines representing Alzheimer’s disease and related dementias, making them available to the scientific community as an open resource and tool to characterize how mutations change fundamental biological properties of disease-relevant cell types.

“We envision that this collection of lines, representing the majority of disease-causing variants associated with inherited Alzheimer’s disease and related dementias, will be of wide use to the scientific community,” says Cookson. “We have worked to make sure we can share what will be high-quality lines widely without restriction. Using this open-science thinking, we aim to reduce duplication and accelerate discovery in this area.”

We have worked to make sure we can share what will be high-quality lines widely without restriction.

To control for any unintended genetic changes that may have occurred during CRISPR-Cas9 editing of the cells, Skarnes says the team will create additional, revertant sets of cell lines in which the disease-causing mutations are canceled out.

The team will use other technologies — knockout and HaloTag knock-in — to generate additional cell lines, to provide researchers with a complete set of cellular tools for cell biological and biochemical studies of the disease process. To expedite the distribution of these new iPS cell lines, JAX has received a one-year, $1,138,796 grant from the Chan Zuckerberg Initiative. Skarnes explains, “CZI has stepped in to provide this funding that will enable JAX to set up, for the first time, a distribution activity around engineered iPSC models.”

Normally an established distributor of iPS cell lines will charge quite a lot of money for access, in order to recover the cost of expanding the clones before sending them out, Skarnes says. “CZI is providing funding to establish this resource at the Bar Harbor, Maine JAX campus. This will greatly facilitate our ability to offer these cell lines to the scientific community.”

The JAX® Mice, Clinical & Research Services (JMCRS) arm of JAX is well known in the scientific community for its long history of distributing genetically defined laboratory mice, cryopreserved embryos and other genetic resources to researchers around the world, as well as making its platform technologies, such as genetically engineered mouse model development, reproductive sciences and in vivo pharmacology, available to the scientific community.

JMCRS General Manager David Grass, Ph.D., who heads the iPS cell line distribution under the CZI grant, explains, “Our team will receive the genetically modified iPS cell lines, grow them in sufficient quantities and conduct quality control reviews. We’re also creating a web portal that researchers can access from the JAX website, where they can browse through the catalog of gene-edited lines and find data on quality assessment and protocols for each line.”

Combining approaches gives us the best chances of understanding how individuals develop dementia and what strategies are needed to prevent it.

JAX Associate Professor Gareth Howell, Ph.D., studies Alzheimer’s disease and other neurodegenerative disorders, and is an architect of the MODEL-AD consortium to create advanced new mouse models for research. Howell comments, “Late-onset Alzheimer’s disease is likely caused by a combination of multiple genetic and environmental factors. This complexity makes understanding the interactions between these factors challenging.”

At JAX, Howell says, “it is exciting that we have the ability to study these factors both in mouse models and also in cell-based models. Combining approaches gives us the best chances of understanding how individuals develop dementia and what strategies are needed to prevent it.”