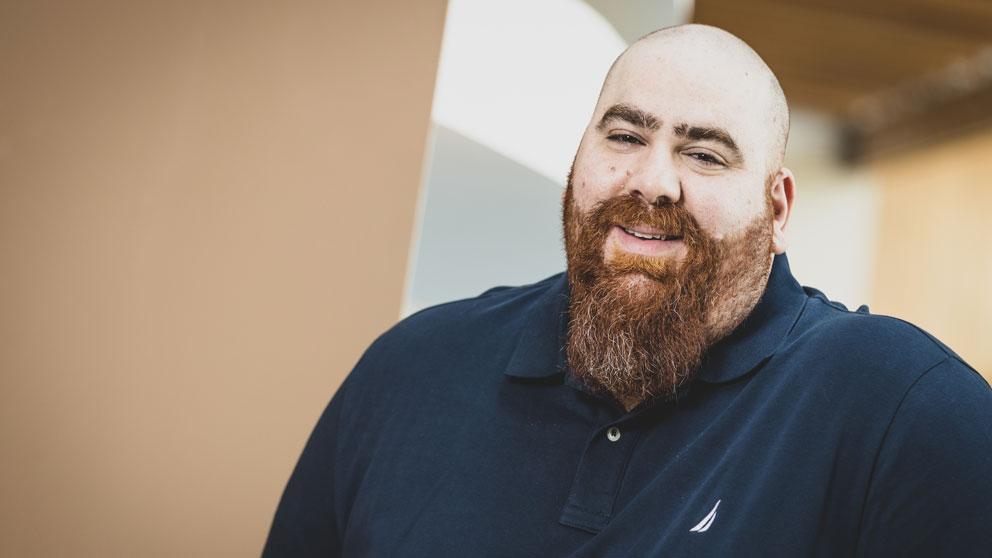 The Jackson Laboratory postdoc researcher Niran Hadad, Ph.D., has pursued aging research throughout most of his career. Now his singular focus is being rewarded with a unique fellowship.

Hadad works in the laboratory of JAX Associate Professor Catherine Kaczorowski, Ph.D. He says that he has long been fascinated with the science of aging, and working at JAX was a move that has roots in his graduate school days. During his Ph.D. work in Oklahoma, he spoke with a JAX scholar at an aging research conference and was immediately interested in the lab.

The research of aging at JAX

“I was really struck with the power of model organisms and the prospect at having lots of independence in my research,” Hadad explained, “Being able to think and work outside the box is important to me.”

After graduation, Hadad searched for a lab that fit him and his style, always keeping JAX top of mind. He wanted a place to continue his work in aging, particularly into the genetics of the process. Getting to work in the Kaczorowski Lab, then, has been a perfect fit. It’s a place where, Hadad explains, he gets the freedom to investigate the areas that he’s interested in while being surrounded by colleagues that he can work with towards similar goals.

Hadad’s primary research focus is leveraging genetically diverse mouse populations to uncover genetic and epigenetic mechanisms that govern organismal cognitive aging and Alzheimer’s-related dementia. It’s this focus on Alzheimer’s disease that has received the attention of the BrightFocus Foundation.

"Aging is the main risk factor for neurodegenerative disease," says Hadad," Therefore, it is crucial to understand the mechanisms of aging in order to learn more about the development and onset of age-related neurodegeneration such as Alzheimer's and dementia."

The BrightFocus Foundation is a non-profit organization that promotes research into Alzheimer’s Disease, muscular degeneration, and glaucoma. Part of their mission also includes specifically funding younger researchers. This was very appealing to Hadad, being both a younger researcher and a non-U.S. citizen.

Not all grant funding is open to non-citizens, so this fellowship was a golden opportunity. “This funding is a huge deal,” says Hadad, “I compete for fewer awards than most people, so this will be a jumpstart to my research.”

Working with BrightFocus, Hadad will be examining sleep disorders: specifically, the genetics of sleep disruption often associated with Alzheimer’s disease patients. According to Hadad, this fascinating new line of inquiry looks at why around half of Alzheimer’s patients suffer from sleep disruptions. Finding the genes responsible for this may go a long way in answering several questions: What makes some people more susceptible to cognitive decline? How do some people develop resiliency? Is sleep disruption a symptom of Alzheimer’s or a contributing factor?

Hadad is working with JAX mouse models, including the AD-BXDs developed in the Kaczorowski Lab. This mouse model is a cross between a genetically diverse population and a standard Alzheimer's model, thus studying the illness in a model that has a more diverse genetic background. Since the diverse mouse genome mimics the phenotype of humans, this allows researchers to observe many genetic factors, including why sleep disruption is present in some mice but not others. This invaluable data will help the BrightFocus study and hopefully shed more light on Alzheimer’s and its effects on humans.

The continuing path of Alzheimer’s research

Hadad is excited to continue his work on Alzheimer’s through the length of the fellowship and beyond. "I would like to complete everything I proposed in the fellowship," Hadad says. "I want to find the underlying genes for sleep disruption and Alzheimer’s and complete all the work involved.”

Hadad has his eyes on the future, already thinking about continuing his work down the path of independent research in the future after he completes the fellowship.

“Overall,” says Hadad, “it’s been a wonderful experience at JAX and with the fellowship. Going through the grant writing process was very valuable." Hadad explains that he grew professionally and personally in many ways working at JAX. From learning more about grant writing to working with a diverse research team, Hadad says it’s all beneficial.

“I’ve loved working in the lab so far,” Hadad says, “and I can’t wait to continue with more research."

Hadad notes that the multidisciplinary work proposed in the BrightFocus grant will be done under the mentorship of Kaczorowski and in collaboration and guidance from JAX Assistant Professor Ryan Tehwey, Ph.D., Allan Pack, MBCh.B., Ph.D., from UPenn Health, and Tim Hohman, Ph.D., from Vanderbilt.