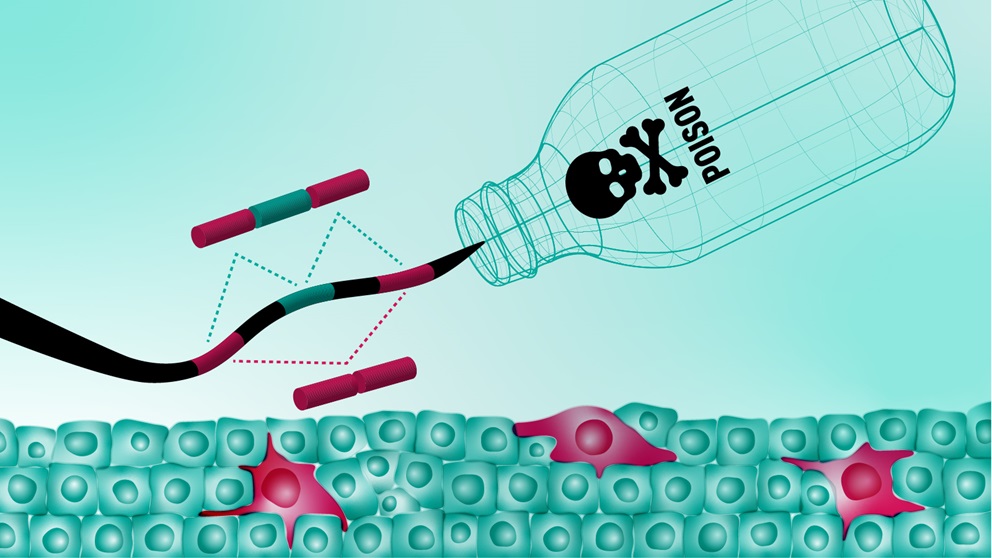 JAX researchers report that SR proteins, a family of 14 related splicing factors, are cross-regulated by alternative splicing of poison exons in their own pre-mRNA, symbolized by a poison bottle. The artwork depicts the alterations in poison exon inclusion between normal cells (green) and tumor cells (purple). Design by Olga Anczukow. Art by Jane Cha.

When DNA is transcribed to messenger RNA (mRNA), the mRNA that first emerges is like a rough draft of a movie. The final cut, so to speak, is assembled by splicing some parts out (introns) and stitching other parts together (exons), before it is translated into a protein. But, as with movie editing, splicing can be done in different ways, yielding alternative final mRNAs and proteins from the same gene. While alternative RNA splicing is a normal part of the gene expression process, its dysfunction can lead to cardiac and neurological disorders, cancer and other diseases.

The Anczukow LabInvestigates how alternative RNA splicing contributes to cancer with the goal of identifying novel clinical biomarkers and targets for precision medicine.the-anczukow-lab

Serine-arginine-rich (SR) proteins are a family of splicing factors involved in alternative RNA splicing that regulate exon skipping or inclusion. Each of the 14 SR proteins contains a so-called “poison exon” sequence, an exon that, when included, marks the mRNA for destruction and prevents protein production. Surprisingly, poison exon sequences have remained very similar across species and through millions of years of evolution, and they are commonly found in genes that encode RNA binding proteins, including splicing factors. Given that poison exons are the seeds of mRNA destruction, researchers wondered why these sequences would be so highly conserved.

SR proteins are critical for normal development and are also implicated in cancer, as tumor cells often contain altered levels of SR proteins compared to normal cells. These changes often occur without changes at the DNA level, so it was theorized that defects in RNA or protein expression may underlie the SR protein level differences. Anczuków and her team therefore investigated how all SR proteins are regulated by alternative splicing of their own pre-mRNAs.

What they found was an extensive cross-regulatory network within the SR protein family that involves the inclusion or exclusion of poison exons. In essence, particular SR proteins regulate the splicing of other SR mRNAs and determine whether or not they will translate to a functional SR protein. This creates a well-orchestrated network that coordinates expression of all 14 SR proteins, and maintains their levels under control in normal tissue. SR proteins function in a dose-dependent manner, meaning that their levels within a cell can have crucial effects on alternative splicing function. During development, it has been previously shown that SR protein levels decrease in some tissues as they differentiate, and it appears that poison exon splicing may be involved in controlling this change over time. Dysfunction within this regulatory network may therefore underlie developmental problems and disease.

A poison for cancer?

In breast and other cancers,  Exploring the role of gene splicing in triple negative breast cancerSplicing factors, comparable to gene editors in our DNA, could hold the key to treating the worst type of breast cancer.previous research had revealed increased levels of an SR protein, TRA2b, in tumor cells. Anczuków and the research team investigated the mechanisms of TRA2b splicing and poison exon exclusion in tumor cells, which leads to more translated protein. They characterized the sequences as well as the mRNA binding locations that influence TRA2b poison exon splicing. Using those findings, they subsequently designed a splice-switching antisense oligonucleotide (ASO), an FDA-approved RNA-based therapeutic that alters alternative splicing by blocking regulatory sequences, to increase poison exon inclusion and lower TRA2b levels. The poison-exon targeting ASO altered cell viability, proliferation, and migration in triple negative breast cancer cells, a highly aggressive subtype of breast cancer that does not respond well to current therapies. The poison-exon targeting ASOs did not kill normal breast cells and therefore represent a potential therapeutic strategy for targeting cancer cells.

SRs represent only a small fraction of the total number of RNA binding proteins associated with alternative splicing, and much work remains to further investigate their function and regulation. Nonetheless, the study presents the largest experimentally validated splicing factor network that utilizes alternative splicing of poison exons described to date, and it provides important insight into the mechanisms underlying the roles of poison exons in splicing factor regulation. It also identifies a promising therapeutic target in cancers marked by high levels of TRA2b.

The Anczuków lab continues to decipher the function of poison exons during normal development and in diseases. They are also seeking to develop novel therapies that modulate splicing factor levels, with the support of a  Correcting splicing-factor defects in diseaseFive-year, $2.1 million federal grant to Olga Anczuków of JAX will reveal the role of splicing-factor defects in cardiac or neurological disorders, cancer, and more.newly awarded National Institutes of Health grant.