Betty Walls is fighting cancer with an upbeat attitude and advanced genomic treatment.

You can try not to laugh when you’re in Betty Walls’ company, but you won’t succeed. You’re in trouble when her twinkling green eyes meet yours, her elfin face crinkled in a grin. And you’re sunk when she follows one of her many jokes with her irresistible, wheezy chuckle.

That wheeze may actually have saved Walls’ life.

In the spring of 2019, she and Hillard, her husband of 58 years, both came down with lung infections. Betty was recovering more quickly, but because she had had asthma and other lung problems all her life, both of them had their lungs x-rayed at Mount Desert Island (MDI) Hospital, just a few blocks from Hillard Walls & Sons Plumbing and Heating in Bar Harbor, Maine.

I’m very optimistic. I don’t see anything to be negative about.

But Betty’s x-ray showed seven troublesome spots, as did a follow-up CT scan, and the results of a biopsy were positive for cancer. Four years earlier, she had been pronounced free of uterine cancer following a course of radiation and chemotherapy. Still, apparently some cancer cells had evaded treatment and invaded her lungs.

She treated the news matter-of-factly in her journal the day she got her diagnosis. “My treatments will be by Dr. Brooks in Bar Harbor. They start on June 5.” She added, in all caps, “I FEEL FINE.” And that’s what she tells her family and friends.

“People come up to me with long faces and say, oh, you poor dear, you have cancer,” she says. “I tell them I feel great, and I sleep great. And when they ask how my appetite is, I tell them if a moose walked by me, he’d soon be missing a hind leg!” 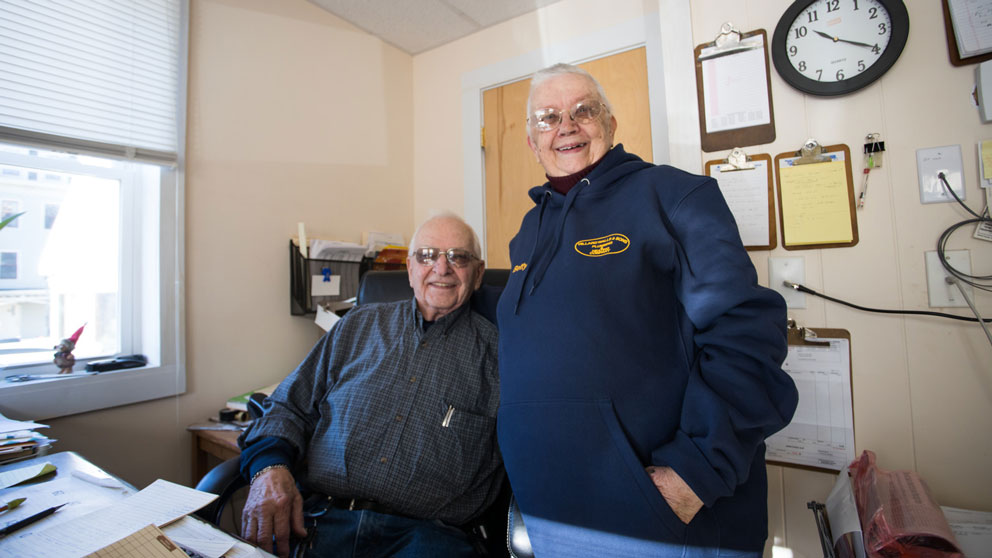 Betty Walls and her husband, Hillard, in an office at Hillard Walls & Sons Plumbing and Heating in Bar Harbor, Maine. JAX photo by Tiffany Laufer.

At that first appointment with oncologist Philip Brooks at MDI Hospital, Walls agreed to participate in an initiative aimed at making the latest genomic analysis available to cancer patients throughout Maine. JAX established the Maine Cancer Genomics Initiative (MCGI) in 2016 with a grant from the Harold Alfond® Foundation, and by now every oncology practice in the state has enrolled in the program.

JAX was one of the world’s first cancer genetics research institutions, and it has had a National Cancer Institute funded Cancer Center since 1983. Today more than 80 principal investigators study the genetic basis for cancer and other diseases as well as normal development and aging.

“The first time I met Dr. Brooks, I don’t think I’d been with him 10 minutes when he told me about this program,” Betty recounts. “He said, ‘Would you consider going in it?’ I said, ‘If that would help other people.’ He said, ‘But it could help you.’ I said, ‘Yeah, but help others, too.’ That was the exact right combination."

Through MCGI, Brooks and other clinicians get access to advanced JAX cancer diagnostic tools, based on the unique genetic profile of each patient’s cancer. There is no cost to Maine patients to have access to this new technology. Genomic tumor boards — specialized teams of oncologists, researchers and clinicians — convene in person and by videoconference to review patients’ test results and design personalized treatment plans. Patients also receive assistance in identifying and applying for clinical trials that are appropriate to their diagnoses.

Walls was born in Town Hill, which is part of Bar Harbor but has its own community and identity. In her high school class of 1960, she wrote for the school newspaper (“I did the love column and the jokes.”). Hillard is from Mount Desert, all of five miles away. The two of them now live just down the road from JAX, in Otter Creek, where they raised their two sons, one now a lobsterman and the other Hillard’s partner in the family business.

Brooks, who is affiliated with Northern Light Eastern Maine Medical Center, is “from away” but has practiced at MDI Hospital for 40 years. He sees cancer patients from cities and towns around the world, as well as caring for the local population. He has long friendships with administrators and scientists at nearby JAX, serving for several years on its Institutional Review Board.

“Well, certainly The Jackson Laboratory is a well-known and highly respected institution,” Brooks says. “Now, thanks to JAX and MCGI, I can learn much more about the genomics of each of my patients’ cancers, and the mutations and alterations of those cancers, and can use that information to match them with the best possible treatment available.”

Brooks describes Walls as “a wonderful, very brave patient.” He says that the information provided through MCGI revealed two mutations on her cancer. “These mutations have the possible chance of offering her targeted treatment that isn’t yet approved, which might be beneficial to her in the future.”

The kind of genomic-based cancer diagnosis that Brooks now accesses through MCGI “is really becoming a standard of practice for almost all patients who have advanced cancer,” he says, “especially for patients who are past the standard treatments and need more innovative ways to control their disease.”

Brooks says that when people ask him, “Isn’t it sad to be an oncologist?”, he says no. “I meet wonderful patients,” he says, “brave patients who are dealing with their illness in often remarkable ways. My fervent hope is that, through these advanced technologies, we’re going to find innovative treatments that will prolong their lives in very meaningful ways, and with fewer side effects and toxicity than standard radiation and chemotherapy.” 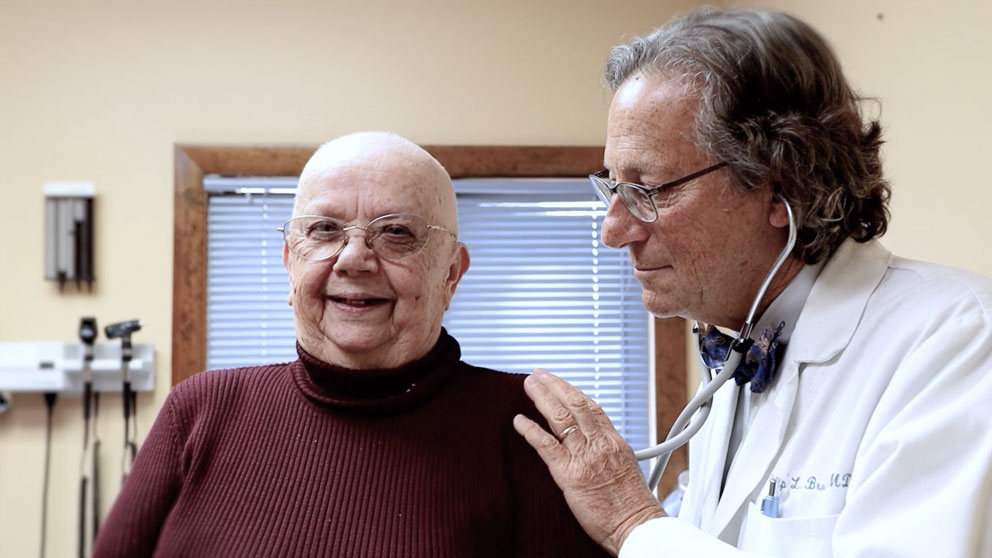 Over six months, Walls has received four chemotherapy treatments. Five of her tumors have disappeared altogether, and two are shrinking.

“I believe God has blessed me again by giving me the best team possible,” Walls says, “and on top of it all, it’s right here in Bar Harbor!”

At 78, the outgoing Walls shows no sign of slowing down. She’s active in several church groups, still helps out with the busy family plumbing business, and until recently ran a carry-out food operation in the building next door. She has been a writer all her life, writing for the local newspaper, authoring several cookbooks and journaling daily.

But her real vocation is as a teacher. She has collected hundreds of dolls over her lifetime, and her popular public talks about them combine cultural history, creative storytelling and life lessons. And she uses her natural communication gifts to talk to her friends and family — many of whom pride themselves on their Yankee stoicism — about life-saving advances in treating cancer and other diseases.

“You mention the word cancer, they immediately are scared to death,” she says. “It doesn’t have to be that way anymore. I’m not a doctor, and I’m not into science, but if you feel something’s wrong, go find out. If it’s bad news, at least you’ll catch it early, and you have some help there to do it. It’s not like it was just five years ago.

“We’re going to beat this,” Walls says. “Between what Dr. Brooks is doing with me and what The Jackson Laboratory is doing with me, I’m very optimistic. I don’t see anything to be negative about.”